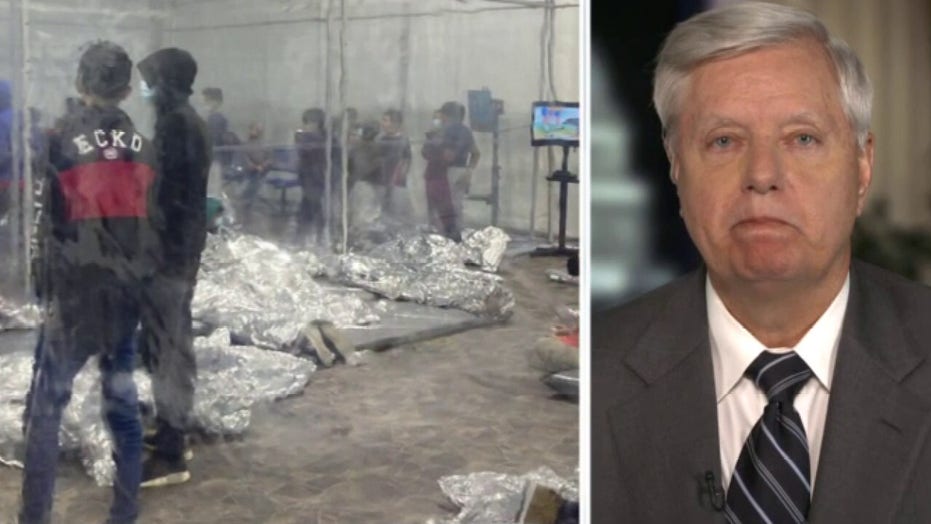 Sen. Lindsey Graham, R-S.C., calls on Biden to ‘get off your a–‘ and visit border detention facilities

A fuming Sen. Lindsey Graham, R-S.C., railed against President Joe Biden and his administration’s role in the crisis at the southern border Tuesday, suggesting the White House is gaslighting the public into believing the U.S.-Mexico frontier is secure.

“If this is proven to be true and I have no doubt it is,” Graham said, “all I can say — let me tell you this, [migrant holding] POD 3A, according to your reporting, is supposed to hold 80 people. There were 694 children in POD 3A being managed by two Border Patrol agents.

“God bless the Border Patrol, God bless the customs agents who are dealing with the Biden administration s—show at the border.”

Graham demanded congressional Democrats show the same outrage that they showed during the Trump administration, pointing to now-Vice President Kamala Harris and Sen. Kirsten Gillibrand, D-N.Y., joining a protest held outside a Trump-era detention center in the Everglades near Homestead, Fla.  Rep. Alexandria Ocasio-Cortez, D-N.Y., also traveled to Texas during the Trump administration to stage a similar protest.

“I am going down [to the Mexican border] with 18 senators Friday and if I am denied the ability to look into any place I want to go, we are going to shut the Senate down,” Graham said. “Where are all the liberal hypocrites? Where is AOC, where’s Elizabeth Warren — or Vice President Harris …”

“Here’s my message: President Biden and Vice President Harris, with all due respect, get off your a– and go to the border and and look and see what you have caused by policies that will not work,” he added. “Quit denying the obvious.”

Graham called the dire situation in Texas, New Mexico and Arizona “beyond a crisis [and] a national security disaster in the making.”

“It will never change, President Biden, until you tell everybody to go home and stop bringing people into the United States. If you’re not willing to do those two things, we will have a million or two people at our border by June.”

When pressed as to whether he believes the Border Patrol, under the auspices of Mayorkas, would actually allow him access to any detention facilities, Graham replied: