Republican lawmakers are attempting to shift the blame for the Jan. 6 insurrection at the U.S. Capitol away from former President Donald Trump and on to Democratic House Speaker Nancy Pelosi (Calif.).

“I think Nancy Pelosi will have a lot of questions to answer about what she knew leading up to the riot on Jan. 6,” Sen. Tom Cotton (R-Ark.) said on Fox News Tuesday.

Thousands of pro-Trump supporters stormed the Capitol last month immediately after attending a rally where Trump repeated the lie that Democrats had stolen the presidential election for Joe Biden. He urged members of the crowd to march on Congress because they’d “never take back our country with weakness.”

Members of the mob wanted to stop Congress from certifying the Electoral College results declaring Biden the winner of the 2020 election. And they had some key targets in mind: outgoing Vice President Mike Pence, whom Trump had accused of failing to stop the certification, and Pelosi, the top House Democrat and a frequent target of the right.

Last month, federal officials arrested a man who went to Washington ahead of the riot, heavily armed with an “assault-style” rifle, a Glock pistol with high-capacity magazines and more than 2,500 rounds of ammunition. He had sent texts threatening to kill Pelosi.

On the day of the riot, Capitol Police evacuated Pelosi because her life was at risk. Federal officials arrested a man who broke into her office, rifled through papers and took pictures of himself with his feet on a desk.

“I wrote her a nasty note, put my feet up on her desk,” Richard Barnett bragged afterward outside the Capitol. He also held up an envelope that he said he had taken from her desk, saying he had not stolen it because he “put a quarter on her desk.” 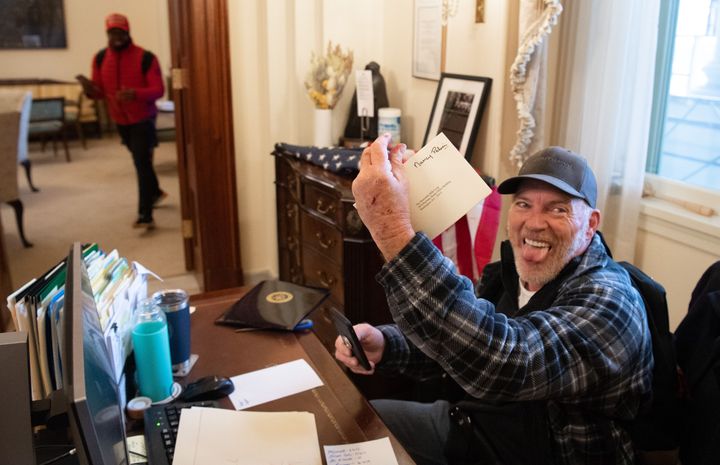 Yet according to Republicans, Pelosi wanted all this to happen ― or, at the very least, she turned a blind eye to the potential for violence.

“There was a clear failure by the security leaders on Capitol Hill to prepare for January 6. The officers of the Capitol Police performed bravely, but they’re right to have no confidence in their leadership,” Cotton said on Fox News Tuesday, suggesting that it was Pelosi’s fault that Capitol Police weren’t prepared.

Similarly, a group of GOP House members ― Rodney Davis (Ill.), Jim Jordan (Ohio), James Comer (Ky.) and Devin Nunes (Calif.) ― wrote a letter to Pelosi on Monday claiming that “many important questions about your responsibility for the security of the Capitol remain unanswered.”

They suggest that Pelosi was involved in denying Capitol Police leadership’s request for National Guard troops for Jan. 6, even though then-House Sergeant-at-Arms Paul Irving told lawmakers that he had never discussed the request with her.

Notably, GOP lawmakers have not raised the same questions about Republican Mitch McConnell, who was the majority leader of the Senate at the time.

Pelosi’s office did not return a request for comment about the accusation that she didn’t want to stop a mob of pro-Trump supporters hoping to kill her.

But her spokesperson, Drew Hamill, previously called the GOP letter a “transparently partisan attempt to lay blame on the Speaker,” noting that the House and Senate sergeants at arms, as well as the chief of the Capitol Police, were all removed from their positions after the Jan. 6 riot.

On Monday, Pelosi announced the formation of a 9/11-style commission to investigate the circumstances around the riot, including the security failures.