Sen. Ron Johnson (R-Wis.) took issue on Thursday with the way the Jan. 6 riot at the U.S. Capitol has been portrayed, saying that the public depiction of the event that resulted in the deaths of five people has been “highly biased.”

“I think it was driven by the very slick video that was produced by the impeachment managers,” he told reporters at the Milwaukee Press Club Thursday, adding, “There has been a lot of false information, but it hasn’t come out of my mouth.”

The video shown at the February impeachment trial of former President Donald Trump laid out the deadly timeline of Jan. 6, including how the events coincided with remarks made by Trump himself. Indeed, thousands of Trump supporters marched to the U.S. Capitol that day at the president’s urging, to try to stop Congress from certifying the election results in favor of Joe Biden.

Johnson has consistently tried to downplay the riot. In February, he said it wasn’t “an armed insurrection,” even though there has been plenty of evidence of weapons at the Capitol that day ― in addition to the violence rioters inflicted on police officers. In March, he said that he “never felt threatened” that day and that the pro-Trump mob that pushed past Capitol police officers were individuals who “truly respect law enforcement” and “loved this country.” 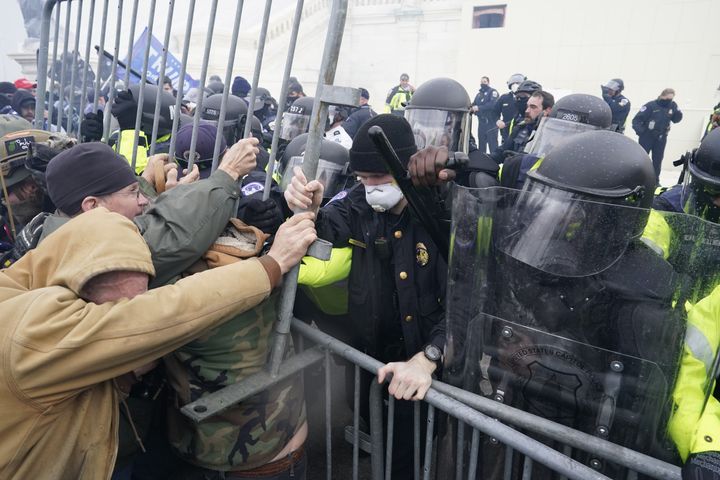 Johnson was one of the Republicans who filibustered legislation to create an independent bipartisan commission to study the Jan. 6 attack, both to look at its causes and how to prevent such an event from ever happening again.

Johnson continued to turn blame away from Trump on Thursday, saying that the real people to blame are “the perpetrators of the crime.” But he also implied that House Speaker Nancy Pelosi (D-Calif.) may be at fault, saying the reason he voted against the legislation to form the commission is that he didn’t trust her to “select commissioners to investigate her own involvement in this thing.”

Pelosi would not have chosen all 10 commissioners; half would be chosen by Democrats, the other half by Republicans. Democrats would get to name the chair because they hold the majority in both the House and Senate.

Johnson was not one of the senators who voted against certifying Biden as the winner of the election on Jan. 6. But six of his GOP colleagues in the Senate and 121 in the House did. And a late February Monmouth University poll found that two-thirds of Republicans don’t believe that Biden won legitimately. Yet Johnson still insisted Thursday that the GOP has accepted his victory: “I think we have. What is there left to accept?”

Even though Johnson said that he believes Biden is truly the president, he said he still supported some state GOP efforts, such as in Arizona, that are pushing forward to audit and question the legitimacy of the election results because of “irregularities.”

Johnson’s appearance at the press club Thursday touched on a number of other topics, including whether he believes systemic racism in America is real. He said no, and told Black activists to read more speeches by Martin Luther King, Jr.

“I do not believe America is a systemically racist nation,” he said. “I wish the current leaders of some of these movements would really go back and reread MLK Jr.’s speeches and his approach to achieving greater racial equality.”

King’s legacy has often been whitewashed by white people over the years. His approach toward white supremacy and poverty was far more radical than often portrayed, in ways that would likely make Johnson uncomfortable today.

In 2020, Johnson blocked a bipartisan effort to make Juneteenth ― a celebration commemorating the end of slavery ― a federal holiday, saying it just cost too much money.

Johnson is up for reelection in 2022, but he is still undecided about whether he will run.