A conservative group will hit Attorney General William Barr with one simple question ― on a mobile billboard ― on Thursday.

Republicans for the Rule of Law said it will drive a truck with pictures of Barr and the query “Have You Forgotten Your Oath?” around Washington at the same time that President Donald Trump’s longtime ally Roger Stone is being sentenced for a slew of convictions stemming from former special counsel Robert Mueller’s Russia investigation. 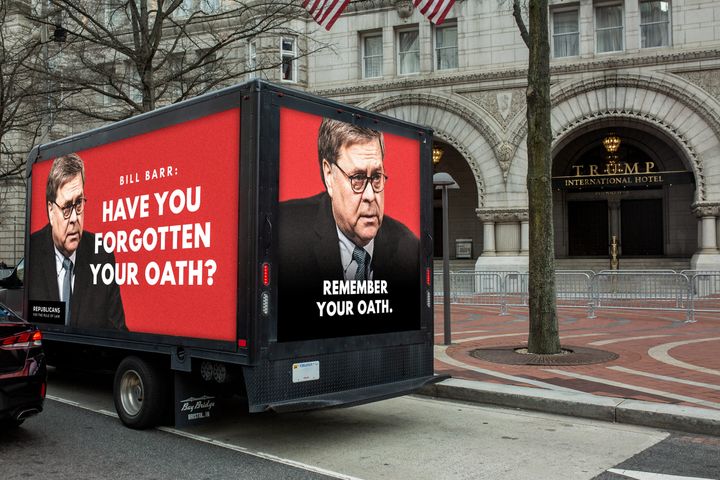 The move prompted widespread outrage, and all four prosecutors who ran the case against Stone withdrew. Trump had raged against the initial recommendation on Twitter.

Republicans for the Rule of Law on Wednesday released a video of former Department of Justice officials, who served in Republican administrations, speaking out against Barr’s intervention.

Check out the clip here:

“The executive branch has enormous power to investigate and prosecute Americans. That’s why we leave law enforcement to be supervised in individual cases by non-political, non-partisan career prosecutors,” the anti-Trump group’s spokesperson, Chris Truax, told HuffPost in a statement on Thursday.

“The American people — especially conservatives and Republicans who are so often skeptical of corruption — shouldn’t stand for this administration’s abuse of power and politicization of law enforcement,” Truax added. “We salute the men and women of the Justice Department, the thin grey line defending America’s tradition of impartial justice. It’s time for Attorney General Barr to decide which side of that line he is on.”

The same group taunted Trump last month with a billboard truck emblazoned with the message “President Pence.” It also described Sen. Mitt Romney (R-Utah) as a “patriot” in this ad that thanked him for being the only Senate Republican who voted to convict Trump for his Ukraine misconduct: