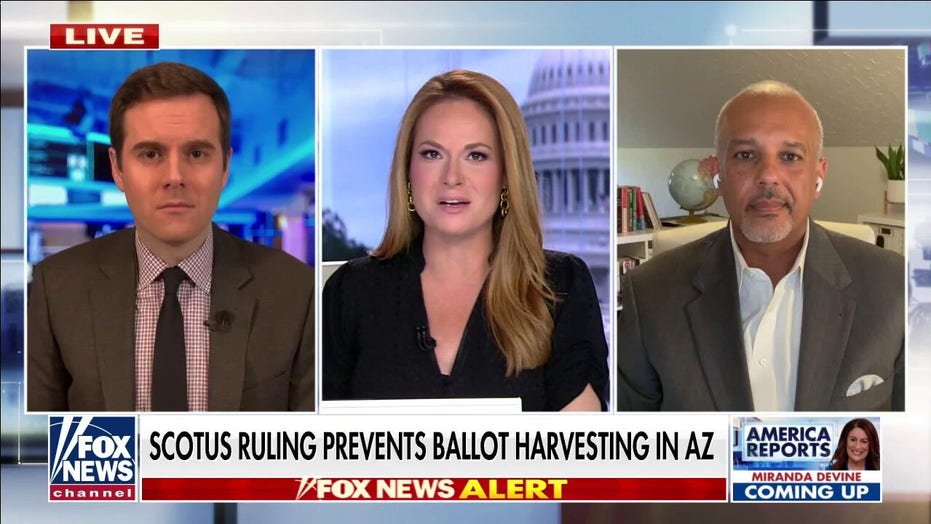 FIRST ON FOX: Georgia’s top law enforcement officer filed a scathing rebuke to the controversial lawsuit against the state’s new election law by President Biden’s Department of Justice, calling it a “shameless political attack” and urging for its immediate dismissal.

“This is not a legitimate lawsuit from the Department of Justice, it’s a campaign flier,” Georgia Attorney General Chris Carr said in a statement to Fox News.

“Biden’s Department of Justice is waging a shameless political attack on Georgia’s constitutional authority to regulate its elections. Georgia’s election system is equally accessible to all voters, and we will continue to vigorously defend the commonsense provisions of Georgia’s Election Integrity Act against these baseless, partisan attacks.”

Carr, who is representing Georgia in the lawsuit, filed a reply brief in the U.S. District Court for the Northern District of Georgia Wednesday.

In the filing, the attorney general accuses DOJ of filling its lawsuit “with innuendo and hyperbole,” and for failing to provide any factual allegations that there was a discriminatory purpose behind the passage of the election bill.

“DOJ fills its complaint with innuendo and hyperbole. But such rhetoric does not make up for the lack of any factual allegations demonstrating that the General Assembly acted with a discriminatory purpose when it passed SB 202.”

The brief continues, “In fact, the complaint is noticeable for its failure to allege a single discriminatory statement by any Georgia legislator, much less by the legislature as a whole, during or before enacting SB 202.”

Carr also argues in the filing that DOJ attorneys do not fully understand Georgia’s law, which was purposefully designed to address the “lack of elector confidence in the election system on all sides of the political spectrum,” reduce the burden on election officials and ultimately streamline uniformity in voting throughout the state.

“A review of Georgia’s ‘entire system’ shows that its election laws are among the least restrictive in the country for absentee and early voting accessibility,” reads the brief.

According to a spokesperson for the office of the attorney general, data shows “that Georgia’s election system is equally open to all voters, and any ‘mere inconvenience’ claimed by the DOJ is not enough to meet Supreme Court precedent,” referring to the decision in Brnovich.

“Liberal justices in [the] recent Brnovich decision agree: there is no intentional discrimination apart from the results test,” the spokesperson continued.

The brief reiterates this distinction, “The [Section 2] inquiry is focused on effects: It asks not about why state officials enacted a rule, but about whether that rule results in racial discrimination.”

During a Committee on House Administration hearing on Wednesday, former acting deputy secretary of the Department of Homeland Security Ken Cuccinelli accused the “radical left” of lying about election security laws, including Georgia’s law.

“It starts at the top, with President Biden,” he said, pointing to Biden’s mischaracterization of Georgia’s new election law, in which he falsely said it ended voting hours early.