Four of Australia’s biggest media companies have entered a multi-billion dollar bidding war for the rights to broadcast and stream AFL games from 2025 in a contest that could change the way fans watch the game.

Multiple industry sources have told The Age and The Sydney Morning Herald that the AFL received formal offers last week for its next media rights deal from its existing broadcast partners Foxtel and Seven West Media, as well as Nine Entertainment Co. and the owner of Channel Ten, Paramount.

However, the sources, who requested anonymity because talks are confidential, say expectations the AFL could fetch $600 million per annum, or $3 billion over five years, for the rights are now fading. Media companies are facing an uncertain economy and a raft of key content deals, including with US studio NBCUniversal, as well as tennis and cricket rights, which are being sold over the next two years. 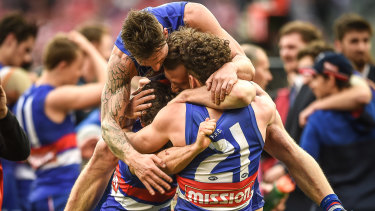 The broadcast deal – the biggest single sports agreement to be negotiated in domestic media over the next 12 months – is expected to be completed before the departure of the AFL’s longstanding chief executive Gillon McLachlan at the end of the AFL season.

The deal is still expected to break records for Australian media, and could reshape the domestic industry landscape. The AFL signed a $2.5 billion, six-year deal, which expires in 2022, that was renegotiated during the pandemic. Its broadcast agreements with Foxtel and Seven were then extended until 2024 for $946 million.

Seven has exclusive rights to the grand final but does not have the ability to broadcast weekly matches on its online platform, 7Plus. The group’s bid for the rights includes a request for games to be accessed digitally, via 7Plus. Sources close to Seven said it would not agree to any future deal without these rights.

A bid by cashed-up Paramount will include options to broadcast AFL and AFLW games across its free-to-air network, Ten, and its streaming service. Sources said Nine, which owns radio, television and publishing assets, has proposed a package of Thursday night games to the AFL. The AFL has previously split its matches across multiple networks, but it is unclear if there is still a desire to do so.

A Paramount bid could deliver a bigger broadcast deal for the AFL, but any offer would not be as high as $600 million per annum – or $3 billion over five years.

The AFL wants to secure a highly lucrative deal to increase payments to players, including AFLW players, who are pushing for a significant increase in their next collective bargaining agreement.

This masthead reported last week that Foxtel was seeking to use its own commentary team for all nine AFL games per round, rather than having to use Seven’s live call of the free-to-air games. Foxtel also wants to run a “Super Saturday,” which would allow it to exclusively broadcast Saturday games on pay TV during the regular season.

However, the AFL is facing pressure in Western Australia over the proposal. West Coast Eagles chief executive Trevor Nisbett, Fremantle Dockers coach Justin Longmuir, the Seven West-owned West Australian newspaper and even WA Premier Mark McGowan have called for all games involving the WA clubs to be shown exclusively on free-to-air.

Should AFL matches involving the WA clubs – and the two South Australian teams (Adelaide Crows and Port Adelaide) – be awarded exclusively to a free-to-air network, the value of the overall rights would almost certainly fail to reach the ambitious targets being eyed off by the AFL’s executive team, as the appeal to pay TV services would be lessened.

The AFL talks are coinciding with advanced discussions between media companies and NBC Universal, the US film studio behind popular shows such as The Office, Brave New World and Gangs of London, which is offering streaming services a new licensing deal.

NBC Universal’s Asia Pacific managing director, Justin Che, was in town last week to talk to companies about licensing programs when the studio’s existing deals with Foxtel and Nine’s streaming service Stan expire later this year. With domestic cricket and tennis negotiations expected to kick off within the next six months, all media companies will be weighing up the best way to spend their money.

Meanwhile, the federal government is in the process of reviewing anti-siphoning laws, which were introduced in 1990 and give free-to-air broadcasters first dibs on rights to key sporting and cultural moments. The government is expected to tweak the anti-siphoning legislation, but it is unclear if a discussion paper will be ready before the AFL deal is complete.

Media companies have requested anti-siphoning laws be overhauled, given the rules do not apply to streaming services such as Amazon Prime and Paramount. Foxtel, which is restricted in broadcast negotiations because of the laws, wants them eased.