Fortescue Metals Group is on a crash course with the fossil fuels sector with a new green energy arm aiming to produce renewable energy at a global scale and cost comparative to traditional energy companies such as Chevron.

Delivering his chairman’s address via video link from Paraguay at the company’s AGM on Wednesday, Andrew Forrest revealed the company would aggressively move into the green energy space with its Fortescue Future Industries arm. 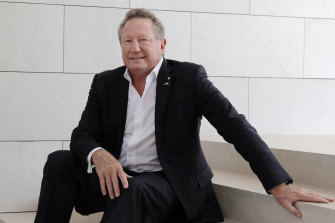 He said FFI would apply the same lessons and company culture that made its $53.6 billion iron ore business successful to the global renewable energy sector.

FFI will finance, develop and operate renewable energy projects and Dr Forrest said a team of 40, including himself, had already visited 23 countries to buy up renewable energy patents and intellectual property.

He revealed FFI would aim to build 235 gigawatts of installed energy capacity – greater than Chevron’s 2019 energy production – and had already committed to $1billion out to 2023.

Apart from its Pilbara energy project, Dr Forrest gave few details on specific projects but signalled they could include the production of green hydrogen and ammonia, which could be used in shipping, steelmaking and fertilisers.

Dr Forrest said FMG's balance sheet would be protected in its efforts to move into green energy.

Climate change and decarbonisation emerged as a common theme at the FMG AGM, which was held in Perth on Tuesday morning.

Dr Forrest said if the world did not arrest climate change, the warming planet would melt permafrost, which would in turn release huge amounts of methane into the atmosphere, making the process impossible to reverse.

Following the NSW and Victoria fires earlier this year, Dr Forrest attracted criticism for his comments that fuel loads were the main cause of the fires. He later clarified his position that climate change was the main driver of the fires.

'Game-changer' coronavirus vaccine could soon be on way