ASIC announced on Monday that he had pleaded guilty to one "rolled up charge" of authorising the making of a false or misleading document in the County Court of Victoria. 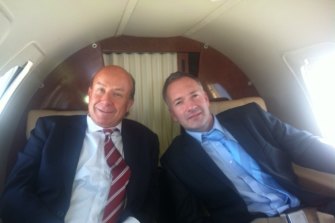 Former NewSat CEO Adrian Ballintine in a corporate jet with the then chief financial officer of his yacht company, Jason Cullen.

Three charges were brought by the Australian Securities and Investments Commission (ASIC) in December 2017 alleging that he authorised three false invoices to funnel $357,000 to his private business on three separate occasions between January 18, 2012 and September 15,  2012.

ASIC said the charge carries a maximum penalty of five years' imprisonment. The matter has been adjourned for sentencing at a later date.

NewSat collapsed in 2015 and wiped out $200 million of investor money. Its international financial backers, the US government's ExIm bank and Europe's COFACE were owed $280 million and $108 million respectively.

NewSat's collapse came after The Age and The Sydney Morning Herald published a series of reports detailing serious alleged governance breaches and conflicts of interest at the company, including controversial payments made to Mr Ballintine's Gold Coast Cresta Motor Yachts business.

The firm had high-level political and diplomatic support, with Prime Minister Malcolm Turnbull in 2012 suggesting the "pretty capable" NewSat could provide satellite services for the NBN Co. Mr Turnbull was shadow communications minister when he made the comment.

The late former Labor prime minister Bob Hawke was also enlisted as a consultant by NewSat and awarded a generous share package and a healthy monthly retainer. There is no suggestion Mr Hawke was involved in any wrongdoing in relation to NewSat.

A sensational leaked boardroom video captured the increasingly dysfunctional climate at NewSat as it began to run into financial problems. It showed NewSat's then chairman, Melbourne businessman Richard Green, and then independent director, former Australia Post deputy chairman, Brendan Fleiter, in a heated disagreement which threatened to become physical over the financial management of the company.
Neither Mr Green nor Mr Fleiter were involved in Balintine's charges.

Separately, ASIC said that Jason Dermot Cullen, an accountant who provided services to NewSat and was head of finance for Mr Ballantine's yacht business, had also pleaded guilty to two charges of making false invoices in order to funnel company money to the yacht business.

He will also be sentenced at a later date with both charges carrying a maximum penalty of five years’ imprisonment.