Qantas is facing another bout of industrial action from its biggest employee group a day after the airline upgraded its profit forecast for the second time in six weeks.

Almost 100 per cent of the airline’s 1200 domestic flight attendants voted in favour of protected strike action if the carrier does not offer a better pay deal. 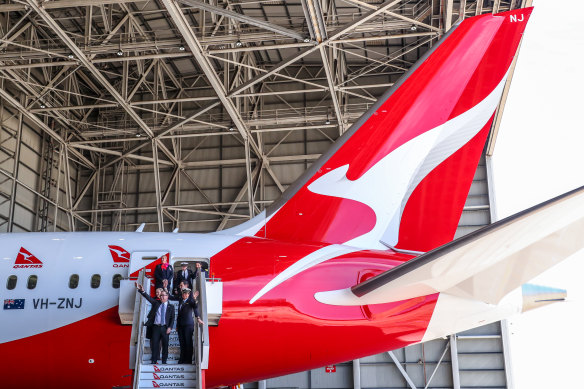 Qantas’ biggest employee group has voted to take industrial action if their pay offer is not improved.

While no dates or scope for the industrial action have been set, the Flight Attendants Association of Australia said the demonstrations would minimise disruption to travellers to avoid airport chaos.

This escalation of Qantas’s pay dispute follows the carrier’s ASX announcement on Wednesday of a $150 million upgrade to its profit forecast, to between $1.35 billion and $1.45 billion in underlying profit before tax, in the first half of its financial year. The carrier’s debt is now expected to fall to between $2.3 billion and $2.5 billion by 31 December, about $900 million more than forecast.

Qantas’s enterprise agreement offer would extend domestic cabin crew shifts from 9.5 hours to 12 hours, and up to 14 hours if there’s a disruption. The proposed agreement also reduces rest periods to 10 hours, which concerns the union who said it would increase fatigue issues.

Qantas has offered 3 per cent annual pay rises to its workers after they accepted a two-year wage freeze when planes were grounded due to COVID-19. About 33 per cent of the carrier’s employees, or 6500 people, who are covered by an enterprise agreement have signed up to a post-COVID agreement.

The airline said in its trading update yesterday that it was “on-track to share the benefits” of its profits with 20,000 non-executive employees through a $5000 boost payment and 1000 shares if key performance conditions were met.

The Flight Attendant Association’s Teri O’Toole has been frustrated at Qantas chief executive Alan Joyce’s assertion that the bulk of Qantas employees receive $100,000 a year.

“Cabin crew are the airline’s biggest work group and receive $48,000 on average, just above the modern award,” O’Toole said.

“We are not asking for too much to be compensated for taking a two-year wage freeze while serving the airline during conditions which required us to learn each state’s ever-changing restrictions mid-air, risk our health daily and be consistently abused by passengers.”

It’s the first time the flight attendants union has taken industrial action and O’Toole is adamant the union does not want to disturb travellers.

“The crew and the public have had enough, but we are at breaking point. You can’t post an $150 million profit upgrade and expect crew to take a pay cut,” she said.

Qantas said it was disappointed by the vote and urged the union to “stick to their word” and avoid passenger disruptions. The carrier also disputed the union’s position the pay offer was a pay cut when accounting for their two-year wage freeze.