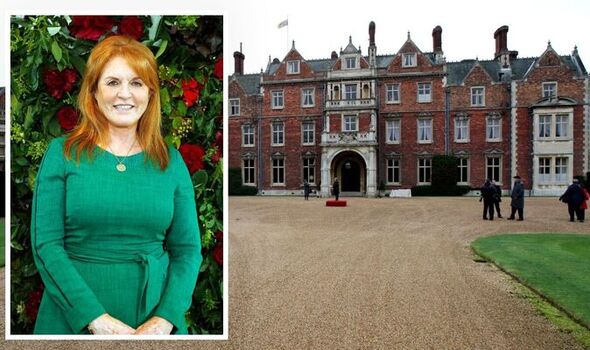 Sarah, Duchess of York has reportedly been invited to spend her first Christmas with the Royal Family since 1992. However, it is understood that Fergie, her ex-husband Prince Andrew, their two daughters Beatrice and Eugenie and their families will all stay at the five-bedroom Wood Farm on the Sandringham Estate.

The remote home has a number of historical and contemporary connections, ranging from Prince John, the late Queen’s uncle, to Prince Philip, who made it his favourite getaway.

Sandringham House stands on a 20,000-acre estate in the Norfolk Coast Area of Outstanding Natural Beauty. The estate also has several other buildings on the grounds, including Prince William and Kate Middleton’s countryside home of Anmer Hall, Park House and York Cottage.

But there is one home on the vast estate that is tucked away from public view and has links to many famous royals.

It was well-known the late monarch had a special place in her heart for Wood Farm and treasured the private time that she spent with Prince Philip before his sad death in April 2021.

Wood Farm is a small cottage that was built around the same time as the main Sandringham House. It was sold to and adapted for the future King Edward VII and Queen Alexandra.

Since his retirement in 2017, the Duke of Edinburgh spent a large majority of his time at the remote Wood Farm, rather than staying in London.

Wood Farm has also been the location where divorced spouses of royals are usually placed for the Christmas period so they can be near their children but also not officially at the monarch’s festive holiday celebrations at Sandringham House.

A Sandringham source has reportedly said that although Prince Andrew cannot participate in royal public life, he can still engage in the Royal Family’s Christmas celebrations.

The Sandringham staff will be in charge of preparing Wood Farm for the entire York family, including Princesses Beatrice and Eugenie, their husbands and their children.

It was well reported that Sarah was never allowed to spend Christmas with the Royal Family after her divorce from Andrew while Prince Philip and the Queen were still alive.

However, now that King Charles is monarch, things will reportedly be different for divorced couples in the Royal Family at Christmas.

It is well-known that the late Queen and Prince Philip relished the time they could spend together at the secluded home. But while Prince Philip is certainly the most recent royal to live at Wood Farm on a permanent basis, the most notable resident was Prince John, the youngest son of King George V and Queen Mary.

George and Mary were the late Queen’s paternal grandparents. Prince John was born on July 12, 1905, at York Cottage on the Sandringham Estate.

By the age of four, there were concerns about Prince John’s development and it was later confirmed that he had epilepsy.

In 1916, the Prince’s epileptic seizures became more frequent and he was sent away to live with his governess Charlotte “Lala” Bill at Wood Farm, described as a secluded farmhouse in the corner of the Sandringham Estate.

Physicians warned the family that he would likely not reach adulthood. John spent Christmas Day in 1918 with his family at Sandringham House, but was sadly taken back to Wood Farm in the evening.

On January 18, 1919, Prince John died in his sleep at Wood Farm following a severe seizure. He is buried at St Mary Magdalene Church in Norfolk.

Royal biographer Robert Jobson previously explained that Wood Farm was a treasured place of retreat for the late Queen. He said: “It is where the Queen, Philip, and their four children went to relax for more than 50 years.

“And, of course, it is where Philip made his retirement home in his twilight years with the Queen’s blessing. The Queen was known to cook and even do dishes while she was staying there.

“With its simple furnishings and open fires, it is a lot less formal than life at Windsor, Buckingham Palace and even Balmoral, although it is spacious enough. When Philip was there, he didn’t stand on ceremony and servants didn’t wear the usual royal uniforms,” he told The Mirror.