Anthony Levandowski, who once ran Uber's self-driving car unit, was ordered Wednesday to pay $US179 million ($271 million) to rival Google, prompting the software engineer to file for bankruptcy protection.

The enormous award, which was approved by a Superior Court judge in San Francisco and was confidential but disclosed in a Securities and Exchange Commission filing, casts new light on one of Silicon Valley's most heated dramas. It is also another blow to Levandowski, once a rising star in the tech industry who now faces criminal charges for allegedly possessing trade secrets that belong to Google. 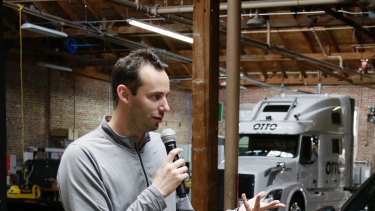 Levandowski left Google in 2016 to form Otto, an autonomous trucking company. In August of that year, Uber acquired Otto for $US700 million. (Uber ultimately paid much less than that because Otto employees either left or were terminated before their stock options were allowed to vest.)

But Google had also brought a case against Levandowski in arbitration, and in December, a panel awarded Google the vast sum. That award was subject to court review and was finalised in California state court on Wednesday.

As part of his employment with Uber, the ride-hailing service had agreed to pay Levandowski's legal fees, including any judgments against him. But Uber said in an SEC filing on Monday that responsibility for the fees is "subject to a dispute between the two parties."

In August, federal prosecutors with the Northern District of California indicted Levandowski, alleging he stole or attempted to steal confidential files from Waymo. The 33-charge indictment could land Levandowski in prison for up to 10 years. He has denied the charges.

During the civil case between Uber and Google, Levandowski exercised his Fifth Amendment rights against self-incrimination when he refused to turn over documents in the case. The judge in the case later recommended that federal prosecutors open a criminal investigation.