Tencent wants you to know that it’s not purely a domestic play. The purveyor of social media and games has started to show the world how much it makes outside of mainland China. It needs to demonstrate to investors that there’s growth to be found yonder.

Amid a raft of domestic regulatory and macroeconomic struggles, China’s largest company posted its slowest expansion on record; and it forecast continued challenges ahead. 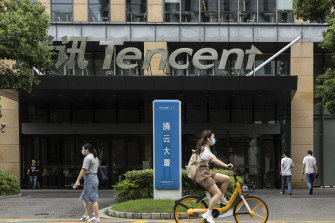 Tencent is expanding on its international growth plans as it stalls locally.Credit:Bloomberg

With a mere 13 per cent increase, revenue for the third-quarter was rather pedestrian and the biggest miss in more than two years. Only its fintech and business services unit showed much strength, climbing 30 per cent thanks to higher commercial payments and the consolidation of an online car-sales unit it took private last year. Unfortunately, that same division is a laggard when it comes to profitability, so it punches below its weight when contributing to overall profits.

Its bread and butter businesses of online games, social networks, and advertising all posted single-digit growth. Ads were particularly hard hit after a government crackdown on online education, weakness in the property sector amid troubles at China Evergrande Group, and new rules which limit how it presents marketing materials. That weakness is likely to continue, it said Wednesday.

“Our advertising revenue growth rate slowed in the period and we expect advertising pricing industry-wide may remain soft for several quarters, due to macro challenges and regulations affecting certain key advertising sectors.”

Even Tencent’s bottom line was padded by passive income rather than its actual operations. The company lumps interest and gains from investments into operating profit, but take those items away and the metric dropped 7 per cent for the quarter.

That’s why it needs to look overseas, and hope that investors will, too. Companies like Singapore-based Sea and Zynga, with headquarters in San Francisco, are doing a roaring trade in online games as they tap into emerging-market growth and enjoy prolonged interest due to COVID-19 restrictions that kept people glued to their devices.

So it makes sense Tencent is now trumpeting the fact that its international games revenue climbed 20 per cent for the quarter, compared to 5 per cent in the domestic market. In reality, the Shenzhen-based company has been a global player for many years. In 2016 it bought Finnish games company Supercell Oy, the maker of the Clash of Clans franchise, after purchasing League of Legends creator Riot Games five years earlier.

Until now, however, it’s only regularly disclosed foreign revenue in annual filings, the latest of which shows that 93 per cent of its business came from mainland China while overseas sales doubled. 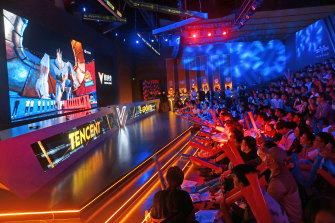 Tencent’s international games revenue climbed 20 per cent for the quarter, compared to 5 per cent in the domestic market.Credit:AP

With the once-hot China market cooling, Tencent plans to invest more to leverage its foreign exposure including beefing up overseas games publishing operations and expanding into multiple regions.

Bearish investors won’t be swayed because they know that even Tencent can’t dodge the numerous economic and regulatory speed bumps that all companies currently face in China. But for those considering buying back in after Tencent’s 37 per cent plunge from its January high, this new clarity on foreign operations is just the signal they need that the tech giant has a non-China growth plan after all.