Rogers appeared at the Downing Centre courts early on Thursday to front the criminal charges. 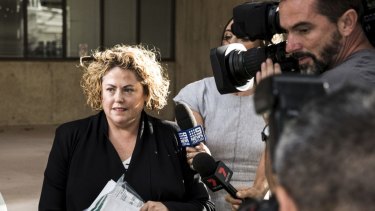 Rogers, who was also chief-of-staff to Thorburn's predecessor Cameron Clyne, was apparently paid "secret commissions" in the form of overseas holidays, boats and helicopter rides.

One of those, as The Sydney Morning Herald revealed last March, was for $2.2 million for "Project Eagle". The "eagle" turned out to be "on-boarding" for former premier Mike Baird, a recent executive recruit.

In reality, Baird's "on-boarding" was being conducted by another company — for $60,000.

For the record, Rogers' $6 million property portfolio was last year frozen by police but not before she and her husband Anthony, a plumber, listed their Williamstown trophy home in Melbourne.

Still, it was a good four years for Rogers before she was hauled to the Surry Hills cop shop last March. There was a month-long family holiday in Europe valued at almost $188,000, the private helicopter trips to the luxury Emirates resort at Wolgan Valley (RRP: $40,000 for three nights), and the trip to New York, Miami and Hawaii — the airfares for eight cost $150,000 alone.

With Rogers having pleaded guilty, all that's left is next week's sentencing.