Emissions from power giant EnergyAustralia – operator of the Yallourn coal-fired power plant in Victoria's Latrobe Valley, the Mt Piper coal-fired plant in NSW and several gas plants nationwide – fell by 1.6 million tonnes, or 7 per cent, in the year to June 30. 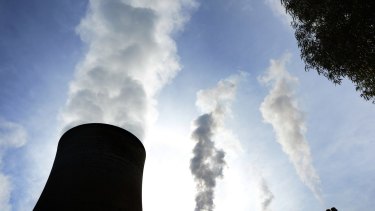 Coal-fired power companies are Australia's worst carbon emitters, according to the Clean Energy Regulator with the top five alone contributing 116 million tonnes of carbon equivalent in 2017-18.

EnergyAustralia's emissions drop in the last financial year – from 21.7 to 20.1 million tonnes of carbon-dioxide equivalent – was largely driven by a 9 per cent decline in output from unplanned outages and planned maintenance outages across its big generators.

An emissions fall is also likely to be reported by AGL, the nation's biggest generator, after a unit at its Loy Yang A coal-fired plant in Victoria was forced out of service in May due to an electrical short and was not brought back online until December.

"All of this emphasizes the fact that replacing coal is the quickest and most urgent thing we need to do to cut emissions," said Jono La Nauze, the chief executive of Environment Victoria, the state's peak body for conservation groups.

"It's no good for anyone that it's happening in a haphazard, accidental way, when clapped-out old power stations give up the ghost. Sure it reduces emissions, but it leaves everyone without reliable power and drives up the cost of doing business."

Liz Westacott, energy director of EnergyAustralia, said the company's emissions decline was helped by a 1.8 per cent improvement in emissions intensity – a measure of efficiency based on the carbon emitted per megawatt-hour of energy produced.

"We continue to upgrade our power stations so they're more efficient," Ms Westacott said.

"We're also pursuing lower-emissions technologies like an expansion of our Tallawarra gas plant and we buy millions of dollars of renewable energy for our customers every year."

New research from progressive think tank the Australia Institute finds Victoria's ageing coal-fired power plants are the least-reliable and most failure-prone in the east-coast energy grid. Loy Yang A and Yallourn were ranked the two worst-performing, suffering 67 breakdowns between them over 2018 and 2019.

Victoria's heaviest-polluting power station, Yallourn, built in the 1970s, generated 1 per cent less energy in 2018-19 and emitted 3 per cent less for the period, EnergyAustralia's figures show. Generation at Mt Piper fell 12 per cent as the plant was taken offline due to issues with coal supply, resulting in a 13 per cent drop in emissions.

EnergyAustralia's data for the company's power plants in Victoria, NSW and South Australia have been lodged with the Clean Energy Regulator for inclusion in its National Greenhouse and Energy Report.