(CNN Business)A board seat accepted and then rejected. A stunning $44 billion takeover offer with uncertain financing. And a surprise early morning tweet putting the deal on hold, temporarily.

Even by the standards of Twitter, a company that has known plenty of chaos and dysfunction in its history, the weeks-long effort by billionaire Elon Musk to buy the company has proven to be uniquely tumultuous — and there’s no clear end in sight. 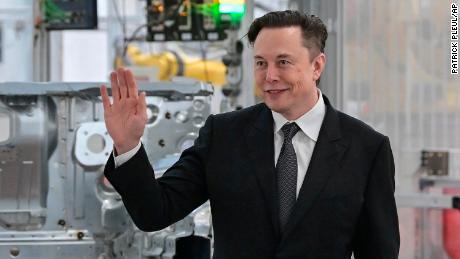 Should the deal go through, it would place the world’s richest man in charge of one of the world’s most influential social media platforms. The acquisition has the potential to upend not just Twitter itself but politics, media and the tech industry. The Tesla and SpaceX CEO has repeatedly stressed that his goal is to bolster what he calls “free speech” on the platform, by which he means all legal speech that complies with local laws in the markets where Twitter operates. He has also said he would reverse Twitter’s ban of former President Donald Trump.

But the attempt by Musk, a wildly successful entrepreneur with a history of erratic behavior, to buy Twitter has been viewed with some skepticism from the start. On the day he made his offer, Musk said: “I’m not sure I’ll actually be able to acquire it.” Some have questioned how he would finance the deal, especially as shares of Tesla (TSLA), which he’s partially using to back his financing of the Twitter deal, and the broader tech sector have declined in the weeks since.

After Musk recently said he was temporarily pausing the deal so he could assess the amount of spam and fake accounts, it prompted speculation that the billionaire might be looking to renegotiate the deal — or back out of it entirely. His actions in the days that followed only reinforced that thinking.

Here is a look back at the many twists and turns in one of the most high-profile tech deals in recent memory.

Musk starts quietly buying up Twitter shares, building his stake in the company. But it would be months before he disclosed this fact to the public.

Musk’s stake in Twitter tops 5%, but that fact is not disclosed until the following month. Musk was obligated to disclose his stake within 10 days of crossing the 5% threshold, but waited 21 days to do so. During that time, he continued building up his stake.

The billionaire begins to make pointed statements about the platform from his account. “Twitter algorithm should be open source,” he wrote, with a poll for users to vote “yes” or “no.”
The following day, Musk tweets out another poll to his followers: “Free speech is essential to a functioning democracy. Do you believe Twitter rigorously adheres to this principle?” 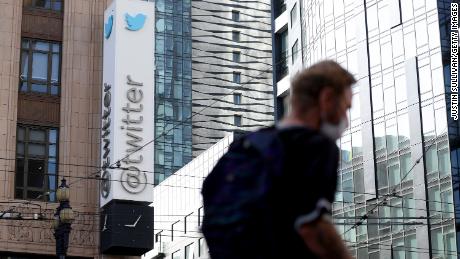 Musk reaches out to Twitter cofounder and former CEO Jack Dorsey to “discuss the future direction of social media,” according to a company filing later put out by the company. The two tech founders are known to have a bit of a billionaire bromance on and off Twitter.

Twitter’s board and some of its leadership team meet with representatives from Wilson Sonsini, a law firm, and J.P. Morgan to discuss the possibility of Musk joining the company’s board, according a later securities filing. Dorsey is said to have told the board that “he and Mr. Musk were friends,” according to the filing.
In the meeting, the Twitter board discussed wanting Musk to agree to “‘standstill’ provisions”,” according to the filing. This would effectively “limit his public statements regarding Twitter, including the making of unsolicited public proposals to acquire Twitter (but not private proposals) without the prior consent of the Twitter Board.”

Musk is revealed to be Twitter’s largest individual shareholder, with a more than 9% stake in the company.
News of the purchase sends shares of the social media company soaring more than 20% in early trading and kicks off a wave of speculation about how Musk might push for changes on the platform.

April 5: Musk agrees to join the board

Twitter CEO Parag Agrawal announces Musk will join Twitter’s board of directors. “Through conversations with Elon in recent weeks, it became clear to us that he would bring great value to our Board,” Agrawal says in a post on Twitter.
As part of the appointment, Musk agrees not to acquire more than 14.9% of the company’s shares while he remains on the board. His term on the board is set to go through 2024, according to a regulatory filing. 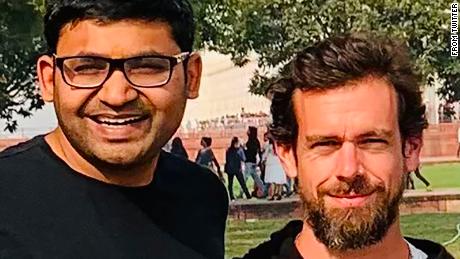 Agrawal announces that Musk has decided not to join the board after all. “I believe this is for the best,” Agrawal writes in a letter to the Twitter team.
The reversal opens the door for Musk to pursue a greater stake in the company — and frees him to tweet his many thoughts about the company.

April 14: Musk offers to buy Twitter and ‘unlock’ its potential

Musk stuns the industry by making an offer to acquire all the shares in Twitter he does not own at a valuation of $41.4 billion. The cash offer represents a 38% premium over the company’s closing price on April 1, the last trading day before Musk disclosed that he had become the company’s biggest shareholder.
“I invested in Twitter as I believe in its potential to be the platform for free speech around the globe, and I believe free speech is a societal imperative for a functioning democracy. However, since making my investment I now realize the company will neither thrive nor serve this societal imperative in its current form. Twitter needs to be transformed as a private company,” Musk writes in his offer letter. “Twitter has extraordinary potential. I will unlock it.”

Twitter’s board of directors adopts a “poison pill” provision, a limited-term shareholder rights plan that potentially makes it harder for Musk to acquire the company. 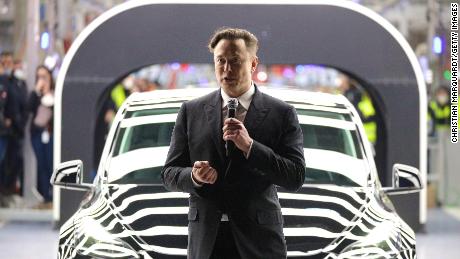 Musk lines up $46.5 billion in financing for the deal, including two debt commitment letters from Morgan Stanley and other unnamed financial institutions and one equity commitment letter from himself, according to a regulatory filing.
The billionaire also reveals that he has not received a formal response from Twitter a week after his acquisition offer. He said he is “seeking to negotiate” a definite acquisition agreement and “is prepared to begin such negotiations immediately” — an apparent reversal from his statement in his acquisition offer letter that it would be his “best and final” offer.
Although he is the richest person in the world, much of Musk’s wealth is tied up in Tesla stock, and some followers of the company speculate that it could be challenging for Musk to raise debt against the historically volatile stock.

April 25: Twitter agrees to sell itself to Elon Musk

Twitter announces that it has agreed to sell itself to Musk in a deal valued at around $44 billion. At a conference later in the day, Musk describes his offer to buy Twitter in characteristically sweeping terms as being about “the future of civilization,” not just making money.
At an all-hands meeting that afternoon, Twitter employees raise questions about everything from what the deal would mean for their compensation to whether former US President Donald Trump would be let back on the platform.

Filings reveal Musk sold $8.5 billion of his Tesla stock in the three days after Twitter board agreed to the sale for an average of $883.09 per share. The filings did not disclose the reason for the sale, but Musk appeared to be raising funds to buy Twitter. 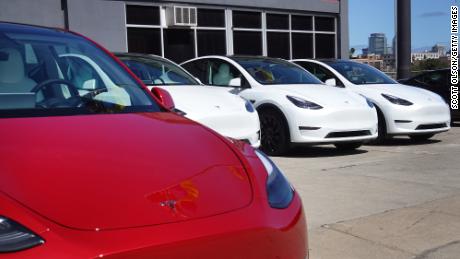 May 4: With a little help from his billionaire friends

Musk raises another $7 billion in financing for the deal. The new investors include Oracle founder Larry Ellison, cryptocurrency platform Binance and venture capital firm Sequoia Capital, according to a filing.

Musk aims to increase Twitter’s annual revenue to $26.4 billion by 2028, up from $5 billion last year, according to a New York Times report, citing Musk’s pitch deck presented to investors. To achieve that lofty goal, Musk intends to bolster Twitter’s subscription revenue and build up a payments business while decreasing the company’s reliance on advertising sales, according to the report.

Musk confirms what many have assumed for weeks: he would reverse Twitter’s Trump ban if his deal to buy the company is completed.
“I do think it was not correct to ban Donald Trump, I think that was a mistake,” Musk said. “I would reverse the perma-ban. … Banning Trump from Twitter didn’t end Trump’s voice, it will amplify it among the right and this is why it’s morally wrong and flat out stupid.” 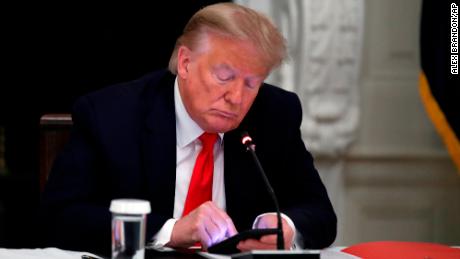 May 12: A partial hiring freeze and executive departures

Twitter confirms to CNN Business that the platform is pausing most hiring and backfills, except for “business critical” roles, and pulling back on other non-labor costs ahead of the acquisition. In addition, Twitter says general manager of consumer, Kayvon Beykpour, and revenue product lead, Bruce Falck, are leaving the company.

Musk tweets that the deal is on hold, linking to a Reuters report from nearly two weeks earlier, about Twitter’s most recent disclosure about its amount of spam and fake accounts. The figure cited in the report, however, is in line with prior quarterly disclosures.
“Twitter deal temporarily on hold pending details supporting calculation that spam/fake accounts do indeed represent less than 5% of users,” Musk tweeted.
Shares of the social media site plummet after Musk’s announcement, dropping more than 10% at market open. Two hours after announcing the hold, Musk says he remains set on purchasing Twitter. “Still committed to acquisition,” he wrote.
Later in the day, Musk says his team is testing Twitter’s numbers and “picked 100 as the sample size number, because that is what Twitter uses to calculate <5% fake/spam/duplicate.”

Musk tweets out that Twitter’s legal team accused him of breaking a nondisclosure agreement when the billionaire revealed the platform’s sample size for automated user checks is allegedly just 100 users.
“Twitter legal just called to complain that I violated their NDA by revealing the bot check sample size is 100! This actually happened,” wrote Musk.

The standoff over bot accounts continues as Musk exchanges a series of tweets with Agrawal over the issue. After Agrawal carefully explains how Twitter attempts to combat and measure spam accounts, Musk responds with a poop emoji.
Musk follows up with a somewhat more thoughtful question. “So how do advertisers know what they’re getting for their money?” Musk asked. “This is fundamental to the financial health of Twitter,” he added.

Musk announces that his acquisition of Twitter “cannot move forward” until he sees more information about the prevalence of spam accounts, claiming that the social media platform falsified numbers in filings. Without citing a source, he claims in a tweet that Twitter is “20% fake/spam accounts” and suggests Twitter’s previous filings with the SEC were misleading.

Later in the day, Musk posts a poll to his Twitter followers: “Twitter claims that >95% of daily active users are real, unique humans. Does anyone have that experience?” before calling on the SEC to evaluate the platform’s numbers. “Hello @SECGov, anyone home?” Musk tweets, in an apparent attempt to get the regulator to look into the matter.
In a statement, Twitter says it remains “committed to completing the transaction on the agreed price and terms as promptly as practicable.” Later, the company says it intends to “enforce the merger agreement.”
Source: Read Full Article