Massachusetts Sen. Elizabeth Warren attributes her failed 2020 presidential bid to her stumbles on explaining how to pay for her signature healthcare plan and the role that gender, particularly her omnipotent female predecessors, played in the campaign.

The Massachusetts Democrat doesn’t blame sexism directly in her new book “Persist,” but Warren suggests her campaign was hampered by the failed political efforts of women before her.

“I had to run against the shadows of Martha and Hillary,” Warren wrote in her new book, according to excerpts reviewed by the Washington Post in reference to Martha Coakley, who lost her Massachusetts Senate bid in 2010, and Hillary Clinton, who failed to beat Donald Trump in 2016.

Warren suggested Democrats were fearful about nominating another woman who could lose to President Trump. 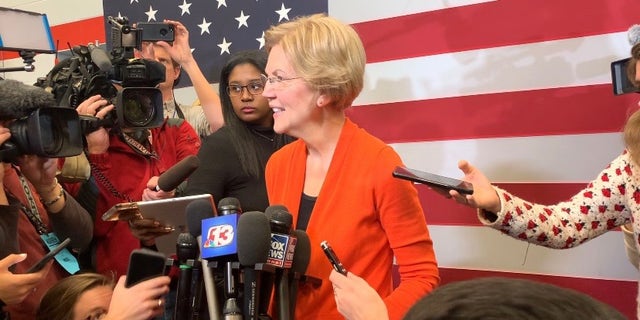 Democratic presidential candidate Sen. Elizabeth Warren speaks with reporters while campaigning in Marshalltown, Iowa on Jan. 12, 2019. Warren comes out with a new book, "Persist" on May 4, 2021.

Warren drew energetic crowds and plenty of buzz during her 2020 Democratic presidential run where she stayed hours after events taking selfies with enthusiastic fans and making pinkie promises with young girls to encourage them to dream big. But Warren failed to finish better than third in any of the primary contests and dropped out of the race in March 2020, lamenting that the prospects for a history-making first female president were essentially gone.

Warren ran on a bold progressive vision for America, but backed back it up with policy chops and a litany of legislative plans. She and her campaign embraced a motto that “Warren has a plan for that.”

But in her book, Warren acknowledges that she stumbled in explaining to Americans how she would pay for her “Medicare for All” plan, which allowed her rivals to pounce and weakened her argument that she had a plan for everything.

“It can be risky to learn on the run, particularly if some of that learning is happening in public,” Warren wrote, according to the Post.

Warren’s “Persist” goes on sale in early May.