Electric vehicle company Arrival is building a car with Uber that will be designed to cater to the ride-hailing industry.

Uber and its drivers will consult on the creation of the Arrival Car, which is expected to enter production in the third quarter of 2023.

Ride-hailing drivers typically opt for a Toyota Prius, Honda Civic, or Hyundai Sonata to act as their work vehicle.

But Arrival, which became the UK’s largest-ever listing in history when it went public on the Nasdaq in March, believes the vehicles currently in use have not been designed to drive the 50,000km a year that is racked up on average by Uber drivers.

Arrival hopes its latest vehicle will help encourage some of the 30 million drivers working in the sector to switch to an electrified model. The company will focus on the areas of affordability, durability, and ease-of-use, in designing the car.

Tom Elvidge, Arrival’s chief of product and formerly an executive for Uber in Europe, said the new vehicle will be at least as cheap as the petrol and diesel equivalents that service the industry.

“We believe we’re pretty well-positioned to do this because as we started to look at what some of the functional requirements would be for a vehicle like this, it actually had a lot in common with a commercial vehicle,” Elvidge told Insider.

“We believe that the decision to move to an EV should not be one that comes with a price premium, so you shouldn’t have to pay more to go down the route of driving an electric van, bus, or now a car.” 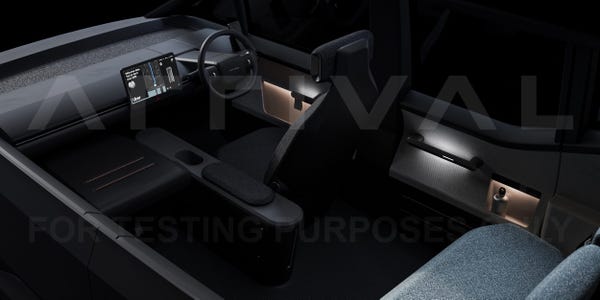 The car represents Arrival’s first foray into a non-commercial vehicle. To date, the company has agreed on deals to sell electric buses to local governments and vans to high-profile companies, including UPS.

Arrival and Uber said they would “explore a strategic relationship” in key markets including the UK, the US, and the EU. To date, Uber, which doesn’t purchase vehicles on behalf of its drivers, has not agreed a deal to buy the eventual vehicle from Arrival. Instead, the decision will eventually be made by the drivers themselves. That said, Elvidge didn’t entirely rule out the prospect of Uber purchasing the cars in the future.

“It’s a very similar relationship to the one we have with UPS in the development of the Arrival Van,” he said. “They’ve been a key partner for a number of years now and that’s been so important and so valuable to both parties as we honed in on how to strike the right balance between functionality and affordability.”

The Arrival product chief also ruled out the resulting car being autonomous, saying the car will be built specifically for ride-hailing drivers. In the UK last week, the government took an early step toward the introduction of autonomous vehicles on British roads when it approved the use of automated lane-keeping systems — or ALKS — on slow-moving motorways.

Elvidge also said the perfect car for ride-hailing drivers was also “probably quite far” from the vehicles that are being used right now.

The cars will be built at Arrival’s microfactories, which are much smaller than traditional auto plants and are designed to be built as close to where demand for a vehicle is as possible.

James Heywood, Uber’s regional general manager for Northern and Eastern Europe, said the company has raised more than £135 million through its Clean Air Plan to help shift drivers to EVs.

“As our cities open up we have an opportunity to make sure that urban transport is cleaner than ever before,” he said.

“Our focus is now on encouraging drivers to use this money to help them upgrade to an electric vehicle, and our partnership with Arrival will help us achieve this goal.”

Arrival went public in March through a special purpose acquisition company ( SPAC) called CIIC Merger Corp. The deal valued Arrival at over $13 billion, making it the most valuable listing by a British company in history, according to Dealogic.

Arrival is headed up by Russian tycoon Denis Sverdlov, who still owns around three-quarters of the firm. CIIC was set up by Peter Cuneo, who previously headed up Marvel.