Domain chief executive Jason Pellegrino says the online real estate portal is positioned to benefit from a recovery in the property market despite posting a fall in revenue and profit for the financial half year.

Mr Pellegrino last year described the Sydney and Melbourne real estate markets as the toughest since the 1990s but on Thursday Domain said conditions had started to improve. "There have been early signs of improving property market activity since the Australia Day weekend," it said in a release to the ASX. 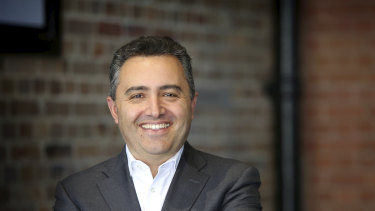 The real estate listings portal posted a statutory net profit for the six months to December 31 of $22.9 million, compared to a $154.1 million loss in the previous corresponding period. Last year, the loss included a $178.8 million non-cash impairment on goodwill. Excluding significant items, Domain's profit fell 38 per cent to $12.9 million.

Total statutory revenue for the first half of the financial year fell to $157.6 million, caused by a reduction in residential listings and a fall in core digital revenue. Excluding significant items, revenue was $147 million for the half, down by 8 per cent

Nine Entertainment Co, the owner of The Sydney Morning Herald and The Age, has a 59 per cent stake in Domain.

Mr Pellegrino said it was a "solid performance" in a difficult period.

"Despite unprecedented declines in new market listings, Domain continued to leverage its key assets of effective listings parity and large, engaged audiences to deliver value to agents and consumers," Mr Pellegrino said. "Our efforts to drive efficiencies throughout this market downturn positions Domain to benefit from any cyclical recovery in property market activity."

A full-franked dividend of 2 cents a share will be paid on March 13.