A powerful inquiry into James Packer's Crown Resorts has been told the casino giant's insistence its  "junket" tour partners were regulated and licensed in Macau provided no reassurance against revelations of links to drug syndicates, money launderers and Chinese gangsters.

The NSW Independent Liquor and Gaming authority on Monday began public hearings into revelations by the Sydney Morning Herald, The Age and 60 Minutes that Crown went into business with junket operators, who bring wealthy Chinese gamblers to its Australian casinos, with links to Asian crime gangs. 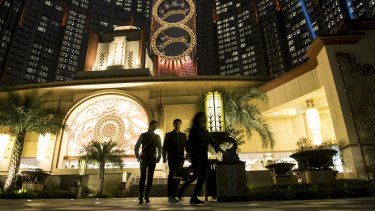 Melco Crown Entertainment’s Studio City resort in Macau. The Crown inquiry has been told it should be skeptical of the territory’s junket licence regime.Credit:Xaume Olleros

Paul Bromberg, a Bangkok-based casino regulation expert with Spectrum Gaming Group who has spent the past 30 years carrying out probity investigations for casinos and regulators, told the inquiry it was "essential" for Macau-based junkets to have some sort of relationship with criminal Triad gangsters.

"It’s for the security of cash during transportations, its body guards for their VIP clients… it's the provision of prostitution to their clients, it’s for narcotics and other vice services, and the cross-border transportation of cash from China as well as.. debt collection," he said.

Mr Bromberg said junkets enabled gamblers to move large amounts of money in and out of China, skirting around capital control laws, and extended their clients gambling credit that could be collected – with the help of criminal enforcers – once they return home.

Crown in July last year ran full-page newspaper advertisements in response to this masthead's reporting on its junkets operation, signed off by all members of its board of directors, including recently appointed chairwoman Helen Coonan.

The advertisments claimed that its Macau-based junkets partners such as Suncity are licensed and "subject to regulatory oversight and probity checks".

Counsel assisting Naomi Sharp asked Mr Bromberg whether the board's claim that Macau-based junkets such as former Crown partner Suncity are licensed and "subject to regulatory oversight and probity checks" in Macau should provide any comfort that they were a fit and proper to be involved in Australian casinos.

“I don’t believe so," Mr Bromberg said. "It is fair to say that one could be septical of licensing in Macau of the junket operators."

Likewise the Crown board's reassurance that Suncity was a "global company listed on the Hong Kong Stock Exchange" was of "very little" comfort, said Mr Bromberg, having investigating several Hong Kong-listed gambling companies and finding the regulators there did not have the resources or power to investigate their overseas activities.

Suncity was until last year was one of Crown's major partners, and also operated a private room in Star Entertainment's Sydney casino, even though its chief executive and co-owner Alvin Chau has been blocked by the government from entering Australia over alleged links to organised crime.

Mr Bromberg said that up until very recently the junket licensing regime in Macau had "very, very minimal requirements", with operators only having to provide criminal checks for individuals and details of some company shareholders.

And when implemented in 2004 those rules did not apply to existing junkets operators, which received licences without any detailed probity investigation taking place, he said. Junket licences were also frequently bought and sold.

Rules had tightened since 2015 and junkets now must disclose the names of all shareholders, and were recently banned from selling their licence, he said.

With greater scrutiny of their business and clients in Macau following an anti-corruption push by Chinese president Xi Jinping, Mr Bromberg said junkets were targeting casinos in places where they felt there was less scrutiny, such as Australia, Vietnam and Las Vegas.

Junkets do not need licences in NSW, where Crown is building a high-roller casino in Sydney to compete with existing operator Star Entertainment, or in Victoria.

Mr Bromberg said he believed the best model was for gaming regulators to issue junket licences, as is done in New Jersey and Singapore, to remove the possibility of "poor decisions" by casino that had become "too close to a junket operator".

In Singapore, junket need to pass the same probity checks as casino owners. To date, no Macau-based junket has been granted a Singapore junket licence, Mr Bromberg said.

On Monday morning The Age, SMH and 60 Minutes revealed that a Crown Resorts vice-president authorised a junior casino staff member to wire $500,000 to a Melbourne drug trafficker, and failed to alert anti-money laundering authority Austrac about the transaction for a year.

Crown shares were trading 6.3 per cent lower by 3.30pm. The inquiry will continue on Tuesday.