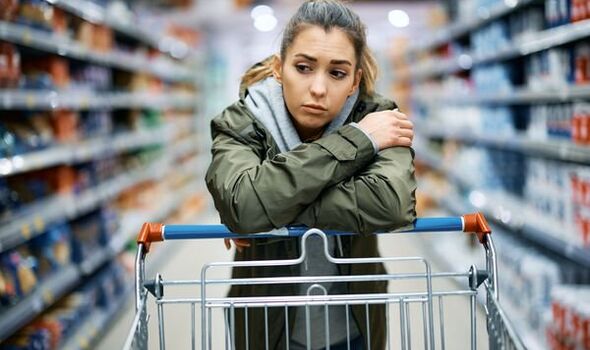 The cost of living crisis is continuing to wreak havoc as new figures from the Office for National Statistics (ONS) reveal the cheapest prices for some grocery staples have risen sharply. The cost of pasta has risen by almost two thirds (68 percent), while tea (46 percent), chips (39 percent), bread (38 percent) and biscuits (34 percent) all rose by more than a third in the year to September. However, there are some ways Britons can make savings and slash the cost of their supermarket shop.

In the last six months alone the data shows vegetable oil prices rose by nearly half (46 percent), chips by almost a quarter (24 percent) and bread by over a fifth.

Alongside these figures, the ONS has published new analysis of data from its near real-time Opinions and Lifestyle Survey, which shows around 7 in 10 (72 percent) of people with prepayment meters found it difficult to afford their energy bills at the beginning of October.

National Statistician Ian Diamond said: “While the recent spike in inflation began with energy prices, today’s fresh insights using a new innovative data source show they are now filtering through to other important items, with the cheapest price of some staple food items rising by around two thirds in the last year.

“Figures from our near real time survey of people show that while rises in food and energy costs are affecting many people across the country, those who are disabled, from certain ethnic minority backgrounds and renters are among those struggling the most.”

He continued: “With rises in the cost of living at the forefront of many people’s minds, our new, almost real time, data showing just how prices are changing and shining a light on how different groups are affected have never been more important.”

These statistics reflect what Britons have been telling Express.co.uk – that the cost of food shop is more worrying than energy bills.

One Bristol resident, 59-year-old Amanda Dean said she can now only get two bags of shopping for £95 – whereas before that would pay for a trolley full.

“At the moment it’s atrocious, to be honest. You go and do a weekly shop and it’s just gone sky-high.”

She continued: “Normally you get a trolley full but nowadays it’s just like two carrier bags.

“We went in the other day and spent £95.96 on two reusable shopping bags and that was with no luxuries.”

Pensioners have been telling Express.co.uk what they have been doing to save money on the food shop.

David Harrison, 80, said him and his wife save £50 a month by batch cooking their meals.