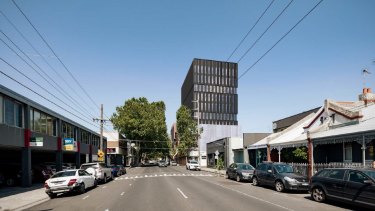 The design for an office proposal at 71 Gipps Street, Collingwood.

Spaces took 40 per cent of the 8600 sq m available in the building, which is in the heart of a booming Collingwood development zone.

The Melbourne-based finance group, led by Frank Durso, has teamed up with Alpha14 Property to deliver the project, known as GCQ, in a fund-through deal with RF CorVal.

The office will sit in CorVal’s institutional VAF 2 fund for the medium to long term.

Neither Aus Finance nor CorVal would discuss the final value of the deal, but sales of other new office projects in Collingwood suggest an estimated end value around $75 million.

A short distance away, Cbus is building a 154 apartment tower and Grocon has constructed the 13-storey Northumberland office in a $120 million fund-through deal with the Liberman family-backed Impact Investment Group.

RF CorVal’s head of transactions, Oliver Picone, said Collingwood’s rents were competitive and the suburb was viewed as an attractive amenity-rich area by prospective tenants.

Colliers International’s Michael Darvell and Matt Cosgrave have been appointed to lease the remainder of the building.

“The remaining tower floors are circa 500 sq m and we anticipate good demand from small to medium-sized companies to lease this space,” Mr Darvell said.

Work on the office is expected to finish in 2021.