After being battered by the summer bushfire crisis, fashion retailer Mosaic Brands is facing a new challenge, with the coronavirus outbreak threatening to have a material impact on the ASX-listed retailer.

In its half-year results released on Tuesday, the company told investors it had postponed its declaration of an interim dividend until the full impact of the COVID-19 virus could be assessed. 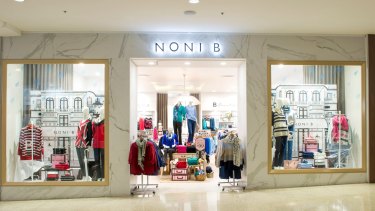 Double blow: Noni B owner Mosaic Brands has been hit by bushfires and the coronavirus.Credit:Cassandra Hannagan

The company –which owns fashion brands such as Noni B, Rivers, and Katies – said its supply chain has seen a "minor impact" for deliveries in February as production levels remained low due to thousands of closed factories.

"The group is now working with its suppliers to ensure minimal delays for winter product. Should delays prove to be material, sales during the early winter season, including the key Mother’s Day period, could be affected," Mosaic warned.

"In view of this uncertainty, the board has decided to take a prudent approach and postpone its decision on declaration of an interim dividend until the impact of the COVID-19 has been clarified."

If no material impact occurs, Mosaic expects to announce an interim dividend of around 9 cents.

The retailer also poured cold water on market expectations of reaching $75 million in full-year earnings before interest, tax, depreciation and amortisation (EBITDA), though it did not provide updated guidance, believing it would be "unhelpful" to do so.

The threat of more coronavirus outbreaks has increased over recent days as numerous cases and fatalities were confirmed in South Korea, Europe and the Middle East. A huge $1.5 trillion was wiped off global stock markets on Monday as investors feared the worst.

For Mosaic, it's more bad news, as the company was one of the worst retail victims of the devastating bushfire crisis which swept New South Wales and Victoria over summer.

Shares plunged 17 per cent in January after the company warned 277 of its 1389 stores across the country had been “directly impacted” by the fires, causing an 8 per cent drop in comparable sales for the December half.

In its results released today, Mosaic revealed its revenue for the period plunged 10.9 per cent to $413.8 million, and gross margin declined 6 per cent to $247 million.

However, these results were better than analysts had feared, with Morgans expecting a 13.2 per cent fall in revenue and a 10.1 per cent drop in gross profit.

Net profit after tax also continued to rise, rising to $14.1 million, and profit margins improved 300 basis points to 60 per cent.

Mosaic Brands’ managing director and chief executive Scott Evans said he was pleased with the progress made during the half, though said it was "unfortunate" that the bushfire crisis has overshadowed the company's results.

Weak consumer demand continued into January, the company warned, though it improved in recent weeks.