Eagle-eyed motorists driving on the Monash Freeway on Monday might have noticed the return of a much-loved feature of the city’s grey skyline: the Nylex Plastics sign, gloriously lit. 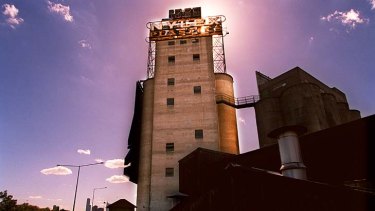 Sadly for Melbourne’s icon spotters, the 60-year-old Cremorne landmark was switched on only temporarily for testing by Caydon Property Group, the developer of the mixed-use Malt District that encompasses the equally historic malt silos on which the clock stands.

The good news is that after a careful renovation, the heritage-listed sign will be restored on top of the Nylex Studios, a 15,000 square metre extension of the silo structure.

“The sign will be 15 metres higher so it will take an even more prominent position,” Caydon development manager Peter Smith said. “It will tell the time and the weather for another generation of Melburnians.”

While the time and weather modules failed to spark, Mr Smith said the sign was in “remarkable condition” having sat idle since 2009, although in 2015 an urban rebel group briefly illuminated it with the help of an extension cord.

As the Nylex sign turned back time for delighted motorists, Caydon yesterday revealed the Malt District’s future would include a 206-room hotel as part of tweaked plans for the $500 million-plus development.

The hotel is expected to be operated by the Accor Group’s 25hours and mark the first Australian site for the boutique German brand.

Mr Smith said the hotel – increased in size from the originally planned 43 rooms – would reflect the vibe of Cremorne, which has transformed from a grungy industrial enclave into a tech hub dubbed Silicon Yarra.

“It won’t be your grand marble type of venue,” Mr Smith said. “It will be much funkier.”

While the hotel has been supersized, the project’s Coppins Corner residential component has reduced from the slated 1000 apartments to 200. Caydon says 70 per cent of the units have been sold to date, with construction due to be completed by December this year.

The first component of the multi-stage project, an 8800 square metre office building leased to accounting group MYOB, is due for completion in October.

Despite the earlier objections of Heritage Victoria and Yarra Council, Mr Smith said the revised master plan did not change the “heritage fabric” of the site.

The precinct housed the Cremorne Brewery in the 1850s and it was then adapted for malting in the 1880s. The 16 distinctive silos – nine of which will be retained – were added in the 1950s and 1960s.

The site’s dilapidated Victoria Bitter sign – another heritage listed feature – will also be restored and retained.

Aptly, the Malt District will include a yet-unnamed microbrewery, which will incorporate the old vats and a rare pneumatic malting machine.

The Nylex sign was due to remain lit up until 10am Tuesday.