A California judge has ruled that Gov. Gavin Newsom overstepped his authority when he issued an executive order requiring vote-by-mail ballots sent to all registered voters, according to reports.

Sutter County Superior Court Judge Sarah Heckman ruled Friday that Newsom did not have the authority to amend or change existing election law – even during a pandemic.

The ruling put a permanent injunction on Newsom, prohibiting him from changing existing law under the California Emergency Services Act (CESA), according to KCRA.

The ruling does not affect the results of the 2020 general election. 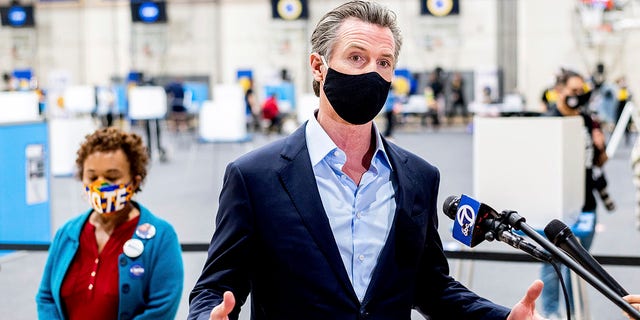 Gov. Gavin Newsom discusses the 2020 election while visiting the Golden State Warriors training facility, which is serving as a polling location, on Nov. 3, in Oakland, Calif.  (AP Photo/Noah Berger)

Newsom issued the order on June 3, just before the state Legislature passed a similar law. Two assemblymen, James Gallagher, R-Yuba City, and Kevin Kiley, R-Rocklin, sued Newsom, arguing that it was the Legislature’s role – not the governor’s – to change law.

The governor’s lawyer unsuccessfully argued that the June order was rendered moot by the Legislature's passage of a similar bill.

"Executive Order N-67-20 issued by the Governor on June 3, 2020 is void as an unconstitutional exercise of legislative power and shall be of no further force or effect," Heckman's ruling said.

"The California Emergency Services Act (CA Government Code §8550 et seq.) does not authorize or empower the Governor of the State of California to amend statutory law or make new statutory law, which is exclusively a legislative function not delegated to the Governor under the CESA.”

Heckman worried that Newsom's action could set a precedent that would allow governors to abuse the CESA to “amend statutory law or create new statutory law even during a state of emergency.”

The judge earlier tentatively ruled that the governor could issue orders but not change statutes.

“Additionally, this ruling has absolutely no effect whatsoever on the current election. We strongly disagree with specific limitations the ruling places on the exercise of the Governor’s emergency authority and are evaluating next steps."

The governor did not release a statement following the final ruling.