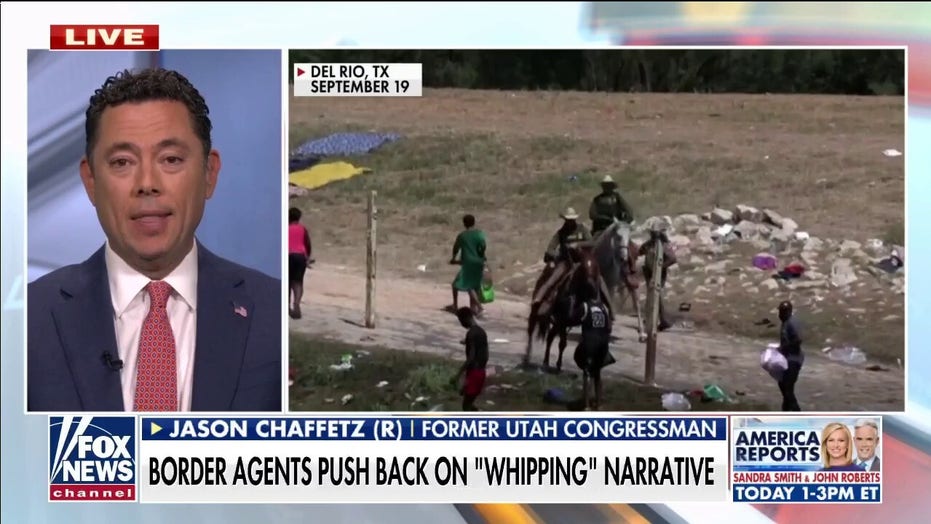 Jason Chaffetz on ‘whipping’ narrative: Democrats inject race into conversation ‘whenever they can’

Jason Chaffetz slammed Democrats on the narrative they have pushed on border agents ‘whipping’ migrants.

Stelter, who is known by his critics of being the media’s “janitor” by shielding the profession from criticism, began “Reliable Sources” on Sunday by acknowledging initial reports were “wrong.”

“These photos, these viral photos of border patrol officials on horseback using horse reins to rein the horses. So these were described as ‘whips’ by some in the media, some commentators on social media,” Stelter said. “This was a faulty media narrative involving the word ‘whips’ that, um, it kind of seemed like the horse was out of the barn. It wasn’t able to be reined back in.”

While Stelter’s sidekick Oliver Darcy admitted that “some news organizations were a lot more careful than others,” he offered a lukewarm defense of their media allies that the viral images “looked like one thing and ended up being another thing when there was more reporting.”

“But the whips narrative- it took hold and then, you know, do you feel like some news outlets weren’t scrutinizing that narrative enough on day one or hour one and that’s what went wrong?” Stelter asked.

“I think it’s a case where something went viral on social media, Brian, and news organizations said, ‘Did we have that?’ And they probably should have looked a little more into the matter, talked to people on the ground before perhaps running with this,” Darcy responded.

Darcy went on to blame “social media commentary” for the origins of the widespread falsehood instead of “majors news organizations” who ran with it.

“I think it’s a good lesson to be more careful but it’s also good that reporters got to the truth, they got to the bottom of the story and they accurately reflected that in the follow-up reports,” Darcy said.

Except CNN was one of the biggest purveyors in peddling the false narrative.

“To me, it does smack of a bygone era … of slavery,” Cuomo told his viewers with a dramatic pause. “Aided by reports of people being beaten whether with a riding crop or the reins, most likely.”

The photographer who took the photo later said he did not witness such violence.

Rep. Henry Cuellar, D-Tx., an outspoken critic of the Biden administration’s immigration policies, defended Border Patrol in a debate last week with CNN anchor Victor Blackwell, who accused the agents of using a “rope or a lasso” on the migrants.

“They don’t carry whips and they do not carry lassos,” Cuellar said. “I think the picture you’re talking about, at least the one I’ve seen, is the rein. The rein of the horses.”

“You talked about the condemnation of what the patrol agents with the reins or whip-whatever with the intent to lash, to hurt people, to keep them away from the border,” Ryan said. “Is that practice gonna still be in place, the horses and the lashing?”

Even hours after Stelter denounced the “bogus” narrative on Sunday, his colleague Jim Acosta failed to challenge the falsehood peddled by Rep. Maxine Waters, D-Calif., during an interview with the lawmaker.

Acosta seemed to back Waters’ assertions, asking her if the Biden administration is doing enough to reform Homeland Security policies following the “downright cruelty” from the Trump administration.