Outgoing Boral boss Mike Kane says the group is conducting a strategic review of its businesses in order to inform the next chief executive about their competitive position and prospects.

However, Mr Kane, who is scheduled to depart the CEO role after the release of the company's full year results in August, said he did not want to "pre-judge" what decisions could be made in response to the research. 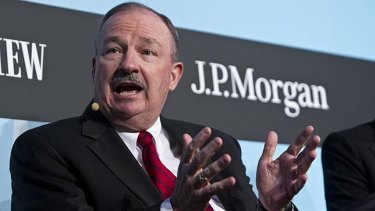 Boral announced earlier this month that Mr Kane, a high-profile US businessman who has led Boral since 2012, would retire this year, which was earlier than had been expected.

On the same day as the leadership announcement, the building products company, which has faced a series of challenges over the past couple of years, announced its fifth profit downgrade inside two years.

It also announced earlier in February that an accounting scandal at its North American windows business had led to it overstating its pre-tax earnings by a total of $US24.4 million ($36.5 million).

Mr Kane was speaking on Thursday after Boral confirmed its December-half results, which had already effectively been released as a trading update.

Boral's first-half statutory net profit fell 40 per cent to $136.5 million and the company cut its interim dividend to 9.5 cents per share, down from 13 cents in the prior corresponding period. The dividend will be paid on April 15.

The company's total revenue actually rose two per cent, to $2.96 billion. Boral is expecting full-year net profit of between $320 million and $340 million. This is down from the prior year's $420 million result.

"The board expects that the new CEO will undertake a thorough review of Boral's portfolio of businesses. In anticipation, we have commenced work in this area to analyse and review the market outlook, competitive position and earnings potential of each of Boral's businesses," Mr Kane told journalists on Thursday.