The plan was shocking even in Mike Bloomberg’s New York: At the height of the Great Recession, with the number of homeless people approaching record highs, the city had quietly begun charging rent from working families living in its rundown shelters.

“People were just outraged by that policy,” said Patrick Markee, then a senior policy analyst at the Coalition for the Homeless. Social services advocates had already found a lot to dislike about Bloomberg’s personal responsibility approach to homelessness, and Markee figured that organizing a swift and unified backlash would be no problem.

But almost immediately, reliable allies in the nonprofit world declined to take a public stand against Mayor Bloomberg, for fear of alienating their most important donor: Mayor Bloomberg.

It was a familiar situation to countless others who tried to oppose Bloomberg in the 12 years he ruled City Hall. Bloomberg was simultaneously the city’s top elected official and its most outsized philanthropist. Over more than a decade, his sprawling philanthropic network gave away approximately $3 billion, leaving almost no one in civic life who didn’t rely in ways large or small on his continued generosity.

“We would find it very hard at times to get these other groups to stand up with us,” Markee recalled in a recent interview. “When we were doing a press conference in front of City Hall, or engaged in a legal action, or whether we were doing rallies, I talked to my colleagues and pretty frankly they would say, ‘Look, we agree with you, we’re on your side. But he’s a critical donor. We can’t afford to lose that kind of money.’” 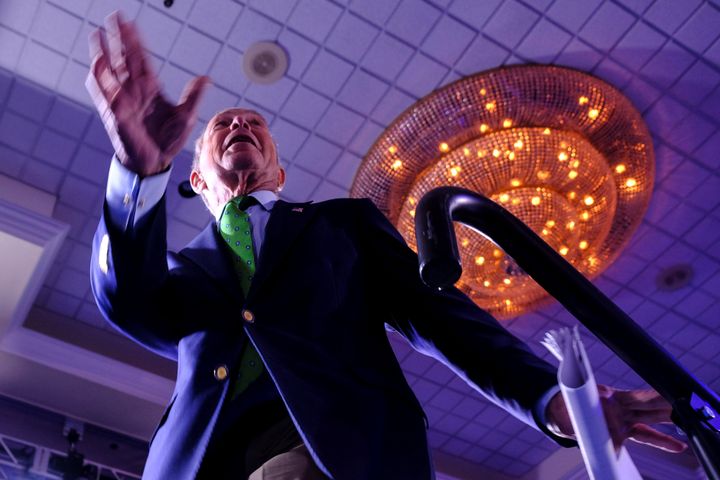 “People always feel when they’re challenging someone who has power and is that wealthy that there could be either explicit or implicit consequences,” said Norman Siegel, who led the New York Civil Liberties Union until the beginning of Bloomberg’s term. Siegel has recalled the group having trouble finding allies when it challenged the New York Police Department’s harsh and often illegal policing methods. “When you have someone as wealthy as Michael Bloomberg, you can never dismiss the possibility.”

Today, Bloomberg’s gobsmacking personal fortune is fuel for an even bigger quest: to become the Democratic nominee for president. His self-funded campaign has spent $400 million in just three months — in all likelihood, more than every other Democratic candidate combined — making his message omnipresent on radio, television and digital platforms, and giving his campaign the formidable staffing levels of a general-election operation.

Bloomberg has also lavished billions on Democratic candidates and left-of-center causes, which helps explain why an ex-Republican who entered the race in order to thwart the party’s progressive grassroots nevertheless enjoys broad goodwill and even endorsements among the party’s elite.

But Bloomberg’s awesome wealth can achieve something else besides extreme exposure. As Markee’s experience shows, Bloomberg’s vast extracurricular philanthropy bought him not only allies in key political moments, but the illusion of political consensus and a lack of serious opposition to the billionaire’s personal policy preferences.

In the months to come, Bloomberg’s rivals will have to contend equally with his ability to buy silence.

Never ‘A Wall Of Separation’

A top deputy once issued angry rebukes to members of arts organizations Bloomberg had patronized after they attended fundraisers for his political opponents. Reliable critics of the city’s neglectful treatment of Black and minority communities, such as Al Sharpton, grew quieter as their churches and charities received major grants. Rev. Calvin O. Butts III, pastor of the influential Abyssinian Baptist Church in Harlem, endorsed the mayor’s 2009 reelection campaign after Bloomberg donated approximately $1 million to Abyssinian’s nonprofit.

Civil liberties advocates and the New York Civil Liberties Union struggled to recruit allies when they mounted lawsuits against the city, Siegel recalled. That was true even as the New York City Police Department increased its use of stop and frisk and its surveillance of Muslim communities.

“Some groups would say ‘Well, you know we’re getting funding from Bloomberg, we like Bloomberg,’ or toward the end people were more unprepared to take him on because they had this delusional thought that somehow when he’s in his foundation world, if they’re nice to him, they’ll get rewards and get grants from his foundation,” Siegel told BuzzFeed in 2013.

Randi Weingarten, then the head of the formidable New York teacher’s union, recounted a similar dynamic. When she clashed with City Hall on union contract negotiations and education reforms, longtime allies were “silent because of the influence the mayor had. We found out later that some of them were getting donations from him,” she said recently. “You would notice it because people would whisper to us all the time about it.”

And Bloomberg’s money didn’t just muzzle nettlesome liberals. It proved just as powerful at muting potential opposition from the grassroots of his own party, the journalist Ben Smith recalled from his days at The Observer: “The various county Republican Parties, whose rank and file (such as they are) rankled at elements of Bloomberg’s muscular assertion of government power to ban smoking, trans fats, and giant sodas, were wholly owned subsidiaries of the mayor, who gave contributions than they’d ever seen or were likely to see again,” he wrote.

All told, Bloomberg made an estimated $2.8 billion in charitable contributions during his 12 years as mayor. Officially, many of those donations were made by an “anonymous” donor. But Bloomberg’s identity was one of New York’s worst-kept secrets, especially given how many of his top deputies went through the revolving door from City Hall to executive philanthropy positions and back again. As a writer for the frequently critical Manhattan Institute put it at the close of Bloomberg’s mayoralty, “There has never been a wall of separation between Bloomberg’s private patronage and his political machine.”

The ur-example came in 2008, when Bloomberg rocked the city by announcing he would seek a third term as mayor. To do so, he needed the city council to overturn New York’s term limits. Aides to Bloomberg called on nonprofits that received millions in donations from Bloomberg’s private philanthropies to testify at public hearings. Susan Freedman, the head of the Public Art Fund, came, as did Geoffrey Canada of the Harlem Children’s Zone; Bloomberg had recently gifted both organizations $500,000.

“The rooms at city hall were packed with people who had never taken an interest in municipal affairs before, but were now showing their support for extending term limits,” a reporter who covered Bloomberg recently recalled. “Their bosses had told them to come.” The Doe Fund, a nonprofit supporting the city’s homeless people, sent at least 11 employees. It took in millions from Bloomberg’s philanthropies in the surrounding years, including $10 million after the hearings on term limits. When employees of the Doe Fund testified, most didn’t hint at their affiliation: They presented themselves simply as involved citizens.

An End-Run Around Politics

Bloomberg’s aides — his campaign did not respond to requests for comment — have long denied that the intention behind his philanthropy was to buy silence. “This presumes that Mike cared about being criticized and wanted to limit criticism,” Stu Loeser, a longtime Bloomberg aide, once said. “He didn’t care much about the politics.” (He preferred to step over them.) Howard Wolfson, Bloomberg’s chief adviser, goes so far as to posit the billionaire’s fortune as what makes him incorruptible, not the other way around. “He has never taken a political contribution in his life,” Wolfson frequently says. “He cannot be bought.”

Outside admirers of Bloomberg have spun his largesse as not a corrosive to democracy but an asset to effective governance. Kathy Wylde, who led the Partnership for New York, a civic group and frequent Bloomberg booster, in 2013 described his immense wealth almost as a necessity: “There’s no doubt about it, it’s going to be much harder for someone who doesn’t have those resources to govern the city,” she said.

Markee, the Coalition for the Homeless advocate, would run headlong into Bloomberg’s singular brand of governance many more times. Eventually, he printed out a long list of beneficiaries of Bloomberg’s charity networks and spent several afternoons scanning for familiar advocacy groups and service providers. By the end of this exercise, he could hardly think of a group that wasn’t on the list.

“It was astounding to me how many groups were getting tons and tons of money from him. We’ve never had that experience in New York City, before or since,” Markee said. “We haven’t had many cases like that in American history.”