In 2003, over the objections of the New York City Council and reproductive rights advocates, then-New York City Mayor Michael Bloomberg vetoed two bills that would have expanded access to, and information about, emergency contraception.

One bill required pharmacies in the city that don’t sell emergency contraception to post a sign alerting customers or face a penalty of up to $500. The other mandated that emergency rooms in city-funded hospitals provide access to the morning-after pill to rape victims, if they wanted it. The city would be prohibited from contracting with hospitals that did not comply.

“I can’t believe the mayor vetoed those bills … This is something that is so important for women to have available to them, and it’s just incredible to me that anyone could not respond favorably to … making these emergency contraceptive drugs available,” said Oliver Koppell, then a Democratic member of the council, during an April 9, 2003, meeting.

At that time, Bloomberg was a Republican. He is now running for the Democratic presidential nomination.

But he has also donated heavily to Republican politicians who oppose these rights. And in this case, Bloomberg was on the opposite side of reproductive rights groups on the issue of these emergency contraception bills.

The city council conducted an investigation in 2002, finding that only half the city’s emergency rooms gave rape victims the option of the morning-after pill. Just 55% of the 170 pharmacies surveyed in the city carried at least one type of emergency contraception.

Women outside Manhattan, especially in Staten Island and Queens, also had less access to emergency contraception.

Bloomberg and his administration objected to the pharmacy legislation because, they said, it would be hard to enforce.

They opposed the emergency room mandate because they didn’t like that it would interfere with the contracting process and were worried about the potential cost during a “fiscal crisis” and deep budget cuts, according to Isaac Weisfuse, a deputy commissioner of health at the time who spoke before the council.

In urging the council to override Bloomberg’s veto at the time, then-council member Christine Quinn (D) called the emergency room measure “the least we can do for women that have been raped.”

“It is the least the law can say to make sure that women who have suffered such a horrible crime get the medical standard of care in every emergency room in this city,” she said during an April 9, 2003 meeting, adding that without a law, treatment would entirely be up to individual hospital administrators, who change on a regular basis. “We need to set the standard for women who are victims of crime in this city and then make sure the hospitals in this city that we do business with live up to it.” 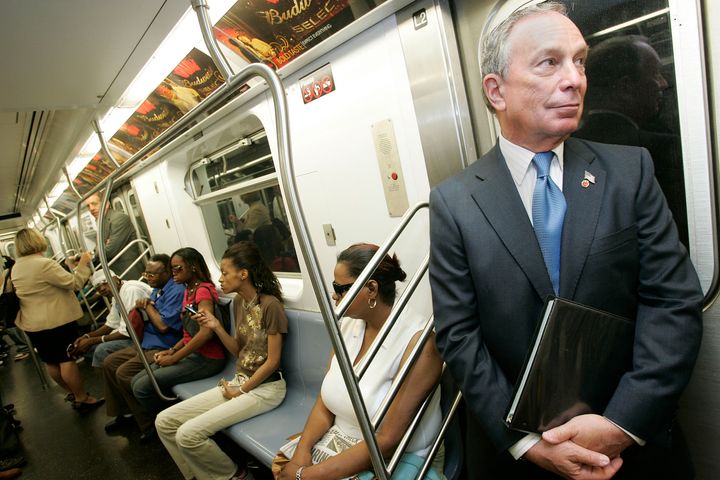 The pieces of legislation that Bloomberg vetoed had the strong support of reproductive rights advocates. Representatives from Planned Parenthood, the National Abortion Reproductive Action League of New York and the National Organization of Women, among others, spoke before the council in favor of the bills.

Emergency contraception “should be offered at every hospital in this city that treats rape survivors or on an emergency basis. Every rape survivor has the right to know about all, and have access to all treatment options,” said Joan Malin, who was then president of Planned Parenthood of New York City. In December, Malin came out and praised the Bloomberg campaign’s plan for reducing the mortality rates of pregnant women.

The idea of the pharmacy bill was not only to shame pharmacies into offering emergency contraception, but to save women the trouble and embarrassment of having to ask if they sell it.

It “requires any pharmacy that does not sell EC to conspicuously post this over its prescription counters, sort of like saying there’s no fire extinguisher here ― which does save one from standing in line, and women really do not need to stand in lines at multiple pharmacies only to find out they don’t have EC,” said Carolyn Westhoff, then a professor of obstetrics and gynecology at Columbia University.

Later in 2003, in October, New York Gov. George Pataki (R) signed a law requiring every hospital in the state to offer the option of emergency contraception to rape victims.

In 2004, the New York City Council issued a new report, finding that even after the state and city passed its emergency room laws, nearly a quarter of hospital emergency rooms in the city were “failing women and breaking the law by not providing survivors of rape/sexual assault the medication necessary to prevent pregnancy.” It also found that nearly a quarter of pharmacies were still not stocking the morning-after pill either.