A bipartisan group of senators on Tuesday released its report on the deadly Capitol riot on Jan. 6 and offered recommendations to help prevent a similar breach in the future.

The Homeland Security and Governmental Affairs Committee and the Senate Rules Committee announced the investigation two days after the riot broke out. The months-long investigation included two hearings and committees reviewed thousands of documents, a press release said. Members interviewed workers from the Capitol Police and various law enforcement agencies.

The investigation seemed to be primarily focused on shortcomings pertaining to intelligence sharing, preparedness and the response time of reinforcements.

The issue has created a deep political fissure in Washington. Senate Republicans last week blocked the creation of a bipartisan panel to further investigate. The vote was 54-35, which was six votes shy of the 60 needed to take up the House bill.

The report released on Tuesday was compiled by Democrat Sens. Gary Peters, Amy Klobuchar and Republicans Rob Portman and Roy Blunt. The investigation found breakdowns at nearly every step of the way, from the FBI and Department of Homeland Security failing to raise the adequate alarm about the threat of violence to the lack of preparation by Capitol Police and other agencies.

It included new details about the police officers on the front lines who suffered chemical burns, brain injuries and broken bones and who told senators that they were left with no direction when command systems broke down, according to the Associated Press. The report recommended immediate changes to give the Capitol Police chief more authority, to provide better planning and equipment for law enforcement and to streamline intelligence gathering among federal agencies.

There were no functional incident commanders, and some senior officers were fighting instead of giving orders. “USCP leadership never took control of the radio system to communicate orders to front-line officers,” the investigation found.

“I was horrified that NO deputy chief or above was on the radio or helping us,” one officer told the committee in an anonymous statement. “For hours the screams on the radio were horrific(,) the sights were unimaginable and there was a complete loss of control. … For hours NO Chief or above took command and control. Officers were begging and pleading for help for medical triage.”

The report blamed an “opaque” process for delaying the request for National Guard assistance and pointed out that these troops were not activated or staged appropriately to respond to the emergency. 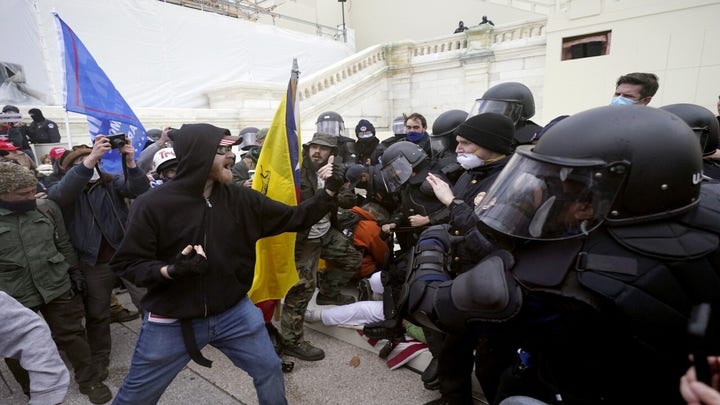 The committees recommended that the chief of the Capitol Police should have a direct line with the National Guard. The senators called for Capitol Police Intelligence Bureau to “ensure the Bureau is adequately staffed and all agents and analysts are properly trained to receive and analyze intelligence information.” It also called for new attention on social media posts to gauge threat levels.

Capitol Police should conduct joint training exercises with federal, state and local governments in the future, the report said.

The committees said it is important for “the mobilization of additional National Guard members from neighboring jurisdictions to provide immediate assistance and report to command and control in the event of an emergency.”

Capitol Police issued a statement saying it appreciates and welcomes the analysis conducted by the Senate committees.

“The USCP acknowledged it must improve how it collects and shares intelligence with its own officers and stakeholders and has made significant changes since the attack on January 6,” the statement read.

“Neither the USCP, nor the FBI, U.S. Secret Service, Metropolitan Police or our other law enforcement partners knew thousands of rioters were planning to attack the U.S. Capitol. The known intelligence simply didn’t support that conclusion,” the statement said.

Blunt said the focus now should be on implementing the recommendations.

“We owe it to the brave men and women who responded that day to do everything we can to prevent an attack like this from ever happening again, and in every instance ensure that the Capitol Police have the training and equipment that they need,” he said.