Joe Biden’s Super Tuesday comeback will likely earn him more than just delegates. Behind the scenes, donors and powerful fundraisers who had previously feared the campaign to be dead are offering their support in droves.

“It’s not just people who want to write checks, it’s national fundraisers who were taking it slow to join a campaign,” said Alan Kessler, a longtime Democratic fundraiser and a bundler for the former vice president. “As somebody just wrote to me, everybody loves a winner.”

The consolidation of old-school donors will give Biden the means to compete with Sen. Bernie Sanders  (I-Vt.) — the other front-runner for the Democratic nomination, who has vaporized old fundraising records by relying entirely on small, independent donations. And it will pit two diametrically opposed means of funding a presidential race against one another: Sanders’ unrivaled army of small donors versus the pantheon of traditional Democratic donors who, after a fractious primary, find themselves all on the same team.

“The crowds are growing exponentially at all his events — rallies, financial,” said Sarah Morgenthau, a Biden bundler, about Biden’s upcoming calendar. Conversations with big donors and bundlers who supported other candidates are “going tremendously,” she added. “Their folks are coming on board. Everybody wants to be a part of this.”

For Biden, their support comes just in time. Ahead of Super Tuesday, his campaign could barely afford advertising or staff in several large states. But as results showed Biden blowing past his poll numbers, CNBC reported that plans for at least 30 Biden fundraisers were underway, with one geared specifically toward LGBTQ donors who earlier flocked to Buttigieg. 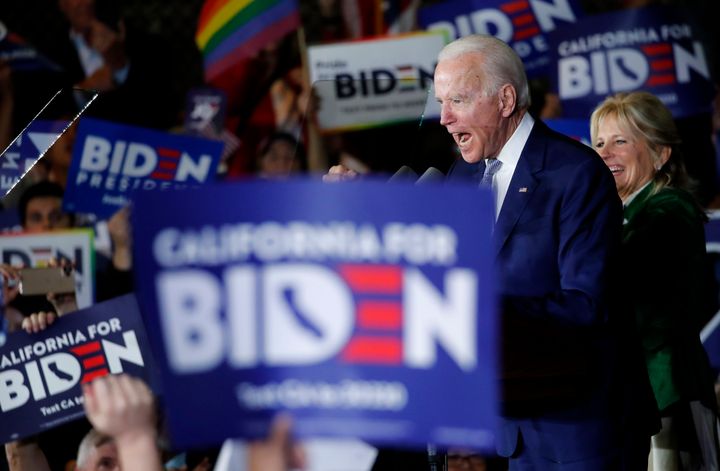 Plenty of former Buttigieg supporters need no persuasion. In a private WhatsApp group of roughly 100 Buttigieg bundlers, several people said, an overwhelming majority committed to fundraising for Biden as soon as Buttigieg dropped out on Sunday.

“People are pretty jazzed,” said one member. “It’s been memes and Biden GIFs all day. Everyone likes the vice president.”

The overtures began before the former South Bend mayor even left the race. After Buttigieg placed third in the Nevada caucus, some of Biden’s major bundlers — a term for donors who tap their elite social networks to gather large numbers of donations for a political candidate — began priming Buttigieg’s bundlers to rally behind the former vice president.

“We had a plan for when this happened,” meaning, when Buttigieg’s and Sen. Amy Klobuchar’s (D-Minn.) fundraising networks went up for grabs, said Joyce Amico. Amico is one of the Biden bundlers doing the persuading. “I like Pete, I like Anthony, I like them,” Amico said, referring to Buttigieg, his bundlers, and Anthony Mercurio, Buttigieg’s national finance director. “How would I not? We all worked together before. It’s like striking up the band again.”

Bloomberg self-financed his campaign to the tune of nine figures and did not hold fundraisers. But he was holding “friend-raisers” — events designed to showcase his support (or the illusion of it) and sideline major Democratic donors who would otherwise raise money for his rivals.

Kessler spent part of the week leading up to the South Carolina primary trying to recruit two longtime Clinton fundraisers to Biden’s campaign, he said, to no avail. They were tapping their networks to show up to parties supporting Bloomberg.

For the latecomers from other campaigns, there is no singular issue animating them so much as they say they are driven by a desire to defeat Donald Trump and Sanders — two goals they see as interchangeable.

Almost. In megarich Aspen, Colorado, Amico was still struggling on Wednesday morning to convert her neighbors into Biden supporters. The surrounding county, Pitkin, is one of a tiny number that Bloomberg actually won on Tuesday.

“Everyone wanted Bloomberg,” she said. “They were all worried about their money.” But with his exit from the race and his endorsement of Biden, Amico sees an opening. “It’s just a process. They’ll come around.”