Home » Biden should have addressed anti-democratic, fantasy-land Trumpism in his speech to Congress

I am a person of hope, an optimist who believes in the good of most of humanity, and I love America. This is what drove me to get involved in politics at a very young age, and what pushes me to stay involved and doing the work of trying to make America a “more perfect union”. So why is it I came away from President Biden’s speech to a joint session of Congress wanting more and feeling much of it were words that don’t ring true in America today?

As someone once said, Democracy is a gift, not a given. And it is time our president and our leaders spoke hard truths to my fellow citizens, not happy talk about how America is great and our democracy is doing well.

Our democracy and republic are fundamentally broken today. And the only way to fix the brokenness is to lay that out clearly, identify how we got here, who is responsible for the damage, and what are we going to do to fix it at a deep structural level.

Yes, Biden laid out some exceedingly popular polices he would like Congress to pass from raising the minimum wage to $15 an hour to common sense gun reform to broad immigration reform to fundamental criminal justice reform while combatting systemic racism in our nation today. All of these have the support of a super majority of Americans. So why is it that these proposals are highly unlikely to pass?

At the core of why none of this will happen is that we don’t have a functional working democracy.  One of the major legacy parties, the GOP, and a cable “news” network, Fox News, traffic in wild conspiracy theories including the myth of widespread voter fraud. They mislead and lie to their base and the public. They are dominated by white nationalism leaning towards support for autocracy. The existence of these in politics today led predictably to the insurrection at the U.S. Capitol on Jan. 6. The Republican Party is not a credible partner to reach consensus or compromise with in any real way. 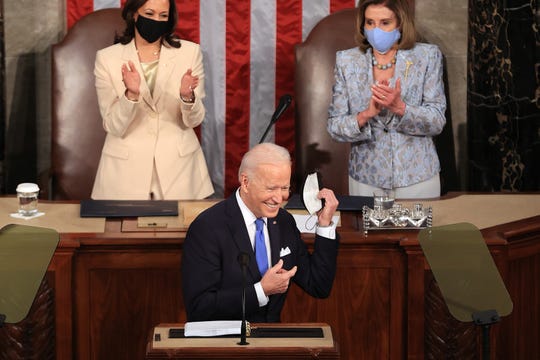 Yes, there is a bipartisan consensus among the general public on the major policy issues laid out above that Biden offered in his speech, but this bipartisan consensus is wholly ineffective with a partner who won’t even acknowledge a common set of facts and who seems to have no interest in the common good. And until we fundamentally address the flaws of one legacy party and within our democracy, moving forward to a better future for all Americans is a hope with no relation to reality.

President’s message to China and Russia: America is back, Trump is gone, the free ride is over

So what do I wish Biden had done last night? I think it is time for him and all of us who are rational and who care about our country to call this all out. And acknowledge that none of the positive things supported by most citizens can get done until we fix our democracy. As a leader of this wonderful nation, Biden needs to shake Americans out of the delusion that we have a healthy democracy. And he must point out the with clarity that the GOP isn’t a trustworthy or helpful partner.

It would have been much better for Biden to have spent more of his time talking about how we are broken and who needs to be held accountable than he did about all the policies he would like to see Congress put into law. If I were writing that speech last night I would have said, “If you traffic in lies and don’t believe in the truth, you are damaging our democracy.  If you either promulgate wild conspiracy theories or don’t push back on them especially surrounding election results, you are an inherent danger to our Republic. If you push craziness about the pandemic and mislead our citizens on the efficacy of vaccines and masks, you are a danger to public health.”

Again, I am an optimist about America, but not in the the short-term, unless we lay out clearly where we are at today. Until we confront this most important issue, all the words surrounding popular policy issues are just more happy promises which will not happen leading to more distrust of all political leaders.

Joe Biden’s economy 100 days in: An inflationary disaster? Or a policy for the people?

Building trust in any relationship involves communicating with truth based in love, and the relationships we have a fellow citizens most especially need truth and compassion.  America has shown over it’s history that it has a great capacity for good when it follows the truth and our ideals, but it has also shown that when we don’t use truth and justice as north stars, we lose our way, and we do some awful things. It is time we base hope in reality, otherwise any dreams we have unfold as nightmares.

Matthew Dowd, a political independent, was chief strategist for President George W. Bush’s 2004 reelection campaign. He is the former chief political analyst for ABC News and author of “A New Way: Embracing the Paradox as We Lead and Serve.” Follow him on Twitter: @matthewjdowd

You can read diverse opinions from our Board of Contributors and other writers on the Opinion front page, on Twitter @usatodayopinion and in our daily Opinion newsletter. To respond to a column, submit a comment to [email protected]