BHP's new chief executive Mike Henry has signalled the mining giant could exit thermal coal and boost exposure to minerals used in green technologies as it looks to reposition itself for a lower carbon world.

In his first detailed comments about the implications of a "decarbonised" future for BHP, Mr Henry said he would consider a sale of the company's thermal coal assets "if someone presented us with an opportunity to exit for value". It would also pursue growth in nickel and copper, which will be increasingly needed to power green technologies, he said. 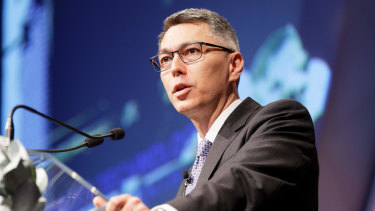 Mr Henry, who took the reins of the world's biggest miner in January, said BHP was continuously reviewing the make-up of its portfolio and determined thermal coal – coal used to generate electricity – posed "downside" risks when it mapped out future scenarios such as the global transition to cleaner energy.

Thermal coal is the heaviest-polluting fuel and the focus of rising investor pressure in response to concerns surrounding its contribution to global warming. BHP rival Rio Tinto, the world's second largest miner, has already removed all exposure to thermal coal while Anglo-American this month said it intended to offload its thermal coal assets in coming years.

New York-based global money manager BlackRock, one of BHP's biggest shareholders, announced a partial retreat from its thermal coal investments, as part of what it described as a climate-driven "reshaping of finance".

Mr Henry on Tuesday said thermal coal was a "small part of our portfolio", owning one mine at Mt Arthur in New South Wales and part-owning another, the Cerrejon project in Colombia, which together account for about 3 per cent of revenue. He would not comment when asked if BHP was already in talks with prospective buyers.

Morgans analyst Adrian Prendergast said Mr Henry's remarks were reflective of a trend of businesses – even resources companies – recognising and responding to the power of the decarbonisation push globally.

Finding a buyer of BHP's thermal coal mines, however, could prove challenging owing to the weak coal prices and a lack of interest in picking up emissions-intensive assets in a market under pressure, Mr Prendergast said.

"The third factor is they would likely want to find a responsible bidder, and put the assets into the hands of a company that would look after them and wouldn't disadvantage stakeholders," he said.

Discussing the future of BHP's portfolio, which is dominated by the steelmaking ingredients of iron ore and metallurgical coal, Mr Henry said he wanted to develop more growth options in its "future facing" commodities such as copper – used in wind turbines – and nickel – which is needed to make lithium-ion batteries.

"We already produce some of the products that will be essential as the world transitions to a decarbonised economy," he said.

"We need more copper and we need more nickel. We do have some growth ahead of us in both of those commodities but I think to the far future and we'd like to have more options."

Although a producer of fossil fuels, BHP has adopted a strong focus on sustainability and mitigating the long-term risks to its business posed by climate change. Under previous chief executive Andrew Mackenzie, the miner last year embarked on an ambitious $500 million emissions-reductions drive to cut the greenhouse gas emissions from BHP's own operations and the operations of its customers – known as "scope 3" emissions.

But along with a string of other resources companies, BHP has come under pressure over its links to lobby groups accused of expressing views "inconsistent" with the Paris climate agreement goals of holding the increase in global average temperatures to below two degrees above pre-industrial levels.

At its latest annual investor meeting, almost one-third of BHP shareholders defied the board and voted for the miner to sever links with groups such as the Minerals Council of Australia and the Business Council of Australia owing to various policy positions surrounding the future of coal and gas.

BHP on Tuesday announced a 39 per cent increase in its half-year underlying profit, largely on the back of a boom in the price of iron ore, its biggest cash generator.