Sen. Bernie Sanders (I-Vt.) earned the distinction of front-runner in the Democratic presidential field on Tuesday night when he edged out his competition in New Hampshire, just over a week after a popular vote win in the Iowa caucuses.

The win, predictably, has handed him the most coveted ― if least quantifiable ― gift in politics: momentum. Days after the victory, Sanders sped past former Vice President Joe Biden in an average of national polls. The local Culinary Workers Union, one of the most powerful forces in Democratic politics in Nevada and a critic of Sanders’ “Medicare for All” plan, announced Thursday that it is choosing not to endorse a candidate in Nevada’s Feb. 22 caucuses. And on Friday, New York City Mayor Bill de Blasio endorsed Sanders, announcing plans to campaign for him in the Silver State.

But the narrowness of Sanders’ win in the Granite State ― he bested former South Bend, Indiana, Mayor Pete Buttigieg by a little more than a percentage point ― and the apparent failure of an overall increase in voter turnout to redound to his benefit, according to exit polls, spooked some Sanders partisans.

“Bernie campaign it’s time to talk to the rural and old parts of the coalition,” Michael Brooks, host of a popular left-wing podcast, tweeted as the primary results were coming in.

Some hard-core Sanders supporters went further, though, imagining a scenario in which the party could deny the Vermont senator the nomination if he arrived at the convention in Milwaukee this July with a bare plurality of pledged delegates. Reforms to the nominating process that Sanders pushed the Democratic National Committee to adopt prevent the elite group of elected officials and party insiders known as superdelegates from breaking with their state’s pledged delegates on the first round of voting. But all bets are off on the second ballot, when superdelegates, who are almost uniformly opposed to Sanders, reassume their freedom to vote their conscience.

Michael Kinnucan, a Brooklyn-based member of the Democratic Socialists of America, which has endorsed Sanders, laid out just such a doomsday outcome in a Facebook post on Tuesday night warning that the “results are frankly pretty discouraging for the left.” 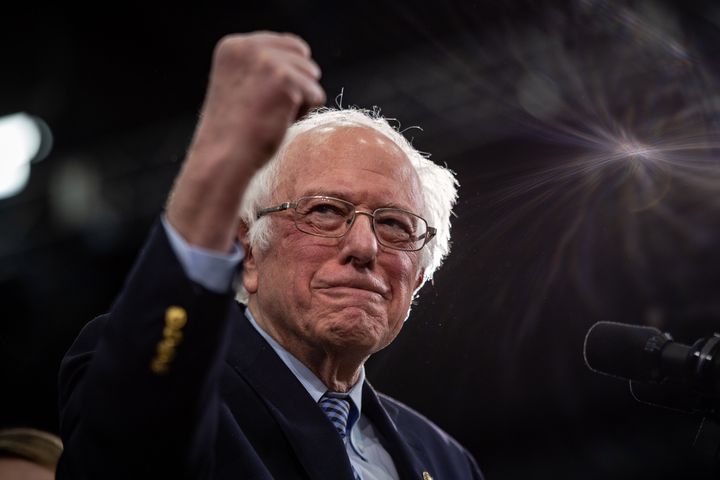 Kinnucan, whose lengthy Facebook commentaries have a following in socialist circles, envisioned an optimistic scenario in which Sanders accelerated enough to win an outright majority, a pessimistic case where a centrist won a majority instead, and a middle ground he called “both the likeliest and scariest” in which Sanders arrives at the convention with a plurality, but his ideological enemies collectively have more delegates than he does.

“The centrists legitimately think the party isn’t behind Bernie’s politics, the leftists legitimately feel like Bernie deserves the nomination, and whatever results from that ― probably a centrist getting the nomination ― is brutally divisive and puts us in a situation where some idiot shill like Buttigieg is going up against Trump in a context where a good chunk of the base think he stole the primary,” Kinnucan wrote.

Kinnucan’s fears are not baseless. The statistics-heavy election analysis site FiveThirtyEight now ranks Sanders as the second most likely person to win the Democratic presidential nomination after “no one” ― the site’s shorthand for a situation where there is no winner of a majority of pledged delegates going into the convention.

The Sanders campaign did not respond to inquiries about whether it is planning for some kind of a contested nominating convention, and if so, what it has in mind.

But several of Sanders’ top surrogates dismissed the worries of some grassroots supporters as premature, even as they provided different reasons for their confidence in Sanders’ path to the nomination.

Given the crowded nature of the field, multiple candidates were only ever going to be able to win pluralities of the contested Democratic primary vote, according to Jim Zogby, a Democratic National Committee member and executive director of the Arab American Institute.

“The votes aren’t there for anyone to be the decisive nominee,” he said.

The question, Zogby argued, is whether the party will rally behind Sanders once it nominates him. He warned Democratic strategists and commentators against disparaging him in the way they did to George McGovern in 1972, depriving him of the support he needed to compete against Richard Nixon.

Rep. Ro Khanna (D-Calif.), a co-chair of Sanders’ campaign with ties to House Speaker Nancy Pelosi (D-Calif.) and Silicon Valley donors, was likewise not worried about entering the convention with less than 50% of pledged delegates.

“People are overthinking this,” Khanna said. “We will nominate the candidate who has the plurality lead.”

Larry Cohen, a DNC member and former head of the Communication Workers of America labor union, expressed some concern. He had been in discussions with supporters of Sen. Elizabeth Warren (D-Mass.) about finding a way for Sanders and Warren to forge a delegate-swapping deal in the event that neither one achieves an outright majority prior to the convention.

But with Warren faltering, he is now countenancing the more precarious situation where Sanders goes into the convention with a plurality and Warren has few delegates to offer against the moderate candidates.

In that situation, he believes a compromise assuring Sanders the nomination on the first ballot, though not ideal, would still be possible. He cited as a potential model the horse-trading between then-Illinois Sen. Barack Obama and then-New York Sen. Hillary Clinton in 2008 that reportedly helped facilitate Clinton’s formal withdrawal from the presidential primary after Obama clinched enough national delegates to win. She went on to halt the roll call vote and call for Obama’s nomination by acclamation in a daytime spectacle at the August 2008 convention that was designed to avoid intraparty acrimony.

“The centrists have lots of things that they want to see,” Cohen said, likening it to the kind of give-and-take involved in assembling a governing coalition in parliamentary democracies. “Somebody gets this, somebody gets that, and together they have a majority.”

Before the deal-making begins, though, Sanders would be in the unusual position of having partisan shame at his disposal as a weapon to wield against wayward Democratic officials.

Because establishment Democrats blame Sanders for Clinton’s loss in the 2016 election and he has maintained his independent status, he has been asked constantly to affirm his support for whomever the Democratic presidential nominee ends up being. He would ironically have the opportunity to demand the same of his Democratic adversaries if he arrived at the convention with a plurality of convention delegates.

“The argument that’s been thrown at him for the last four or five years ― he would need to make that case plainly: that to maintain party unity, he’s the leader now,” said Shant Mesrobian, a Democratic communications consultant who worked on the Obama 2008 campaign. “The way I would put it is that whoever is the delegate leader is the unity candidate of the Democratic Party. And if you don’t see it that way, you’re asking to lose to Donald Trump again.”

But if Sanders’ many antagonists in the Democratic Party will heed that appeal eventually, his victories to this point have not been enough to get them to admit it.

When the Miami Herald asked three Democratic congresswomen from Florida this week if they’d support Sanders as the nominee, they refused to even entertain the premise of the question.

“He’s not going to be the nominee,” Rep. Donna Shalala told the Herald.

In the meantime, Sanders’ allies believe they can expand his coalition beyond his racially diverse, but largely young, core of supporters in time to lock up a majority of delegates.

For Khanna, that means emphasizing that Sanders’ version of democratic socialism is, by his own admission, simply an extension of Franklin Delano Roosevelt’s beloved New Deal. Khanna tried out the line in an interview with MSNBC anchor and Sanders skeptic Chris Matthews on Monday, calling Sanders “an FDR Democrat.”

Sanders is running on “completing the work of the New Deal ― a new New Deal for the 21st century,” Khanna told HuffPost. “We want to make sure people can stay with their families and where they grew up and still get good jobs.”