Australia’s two remaining oil refineries will continue operating for at least another six years, saving the jobs of hundreds of more than 1200 workers, after fuel suppliers Ampol and Viva Energy reached a deal with the federal government.

The companies had been assessing whether to shut down their refineries in Brisbane and Geelong, which process crude oil into refined fuel products, following the closure of ExxonMobil’s refinery in Melbourne’s Altona and BP’s refinery in Perth. 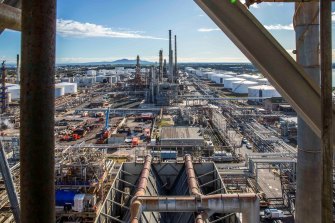 Australian refineries have been battered by a slump in demand and margins during the pandemic. Credit:

On Monday, the chief executives of Ampol and Viva said they intended to keep their plants running until at least mid-2027, subject to the support package being successfully legislated as planned.

“Ampol is pleased that today’s outcome delivers value for shareholders and provides clarity and a path forward for our valued employees at Lytton, supporting the continued employment of 550 Australian manufacturing jobs and the indirect employment of hundreds more,” Ampol chief Mathew Halliday said.

“The outcome will also allow Ampol to progress alternative future energy uses for this strategic site, preserving manufacturing skills that will be critical for success in the energy transition.”

The oil refining sector has been under enormous pressure since the onset of the COVID-19 crisis last year, as travel bans to arrest the spread of infections gutted demand and hammered their profit margins. Oil refineries in Australia have also been struggling to compete against the cheaper-to-run mega-refineries of south-east Asia.

“This has seen the number of refineries in Australia reduce from six in 2011, to only two continuing refineries today, leaving the country predominantly reliant on product imports from international refineries for our fuel requirements,” Viva Energy chief executive Scott Wyatt said.

“In financial year 2020, our Geelong operations had a cash-loss of over $200 million, and without the support of the federal government continued operations would have not been sustainable.”

Mr Wyatt said the plant’s closure could have caused the loss of more than 700 direct jobs as well as the loss of the “last major manufacturing operation in Geelong, and a significant contributor to the Victorian economy.

In the hope of retaining local refining “wherever commercially possible”, Federal Energy Minister Angus Taylor has been in talks with Ampol and Viva over a rescue package including a 1.8¢-a-litre payment for locally made fuel. Taxpayers will also fund a $50.7 million investment for the implementation and monitoring of the minimum stockholding obligation of 24 days to act as a safety net for petrol and jet fuel stocks while diesel stocks will be increased by eight days, to around 28 days of supply.