Asahi has also offered to sell the cider labels Little Green and Bonamy's, which combined with Strongbow account for about 20 per cent of the market. Strongbow alone accounts for about 18 per cent of Australian cider sales. 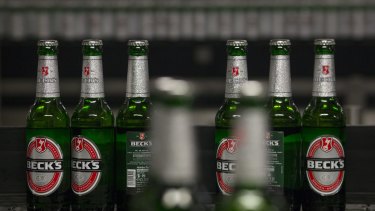 Asahi Beverages has told the competition watchdog it will offload the premium beer brand Beck’s as it seeks approval to buy beer giant CUB.Credit:Jasper Juinen

The two beer and three cider brands identified by Asahi are all currently owned by CUB, meaning that Asahi would retain Australia's number one cider brand, Somersby.

Cider has long been considered a likely roadblock to Asahi’s proposed $16 billion purchase of CUB, and in December the Australian Competition and Consumer Commission said it was concerned about the market strength of a combined Asahi/CUB.

At the time, the ACCC said the proposed deal could lead to higher cider and beer prices and substantially lessen competition in those markets.

The ACCC said a combined Aashi/CUB would have cider brands with about 65 to 71 per cent share of the market. And it warned that an unfettered deal "may substantially lessen competition" in Australia's "highly concentrated" beer market.

ACCC chairman Rod Sims stressed on Friday that Asahi's proposed divestments did not mean the ACCC would ultimately approve the $16 billion deal.

"It's a serious proposal but we still have an open mind on whether it addresses the problem. So we're seeking comment, and we'll take that comment into account as we continue to make our decision as to whether to approve or not approve the merger," he said.

Asahi Beverages, which is owned by the Japanese beer giant Asahi, said it had been working closely with the ACCC to address the concerns it had raised.

"We understand and respect that the ACCC must undertake a thorough process to ensure that the deal does not reduce competition and is in the interests of consumers. Asahi's acquisition of CUB is a significant one and we have always expected that the review process would take some time," said Asahi Beverages chairman Peter Margin.