The London barrister hired by AMP to investigate a female employee’s sexual harassment complaint against senior executive Boe Pahari found all her main allegations credible but deemed much of the conduct inoffensive and said it did not constitute harassment.

Details of the findings by Andrew Burns QC, whose investigation was dubbed Project Jerome within AMP, have emerged a week after the resignation of chairman David Murray and director John Fraser following shareholder unease over their handling of the complaint against Mr Pahari. 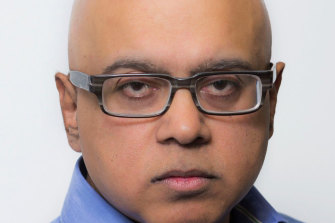 AMP Capital’s Boe Pahari, who was counselled and fined over alleged sexual harassment.

Mr Pahari, who was appointed chief executive of AMP Capital earlier this year, stepped aside from the position last week but remains with the company.

Mr Burns found Mr Pahari engaged in three acts of harassment against his far younger and more junior colleague, Julia Szlakowski, on a night out in London in 2017. But he advised AMP that the severity of the harassment ranged between minor, moderate and a case of outright harassment.

The release of the findings comes as The Age and the Herald confirm that NSW Police investigated the alleged sexual assault of another female AMP Capital employee by a colleague − not Mr Pahari − in 2014.

Details of Mr Burns' investigation have been released by Ms Szlakowski's lawyer, Maurice Blackburn principal Josh Bornstein, amid an ongoing dispute with AMP over its refusal to release draft versions of the report and its communications with the London barrister. 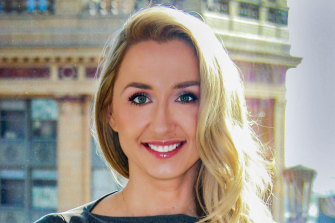 Mr Bornstein said Mr Burns' two-page summary of findings confirmed all nine elements of Ms Szlakowski’s version of events on the night. However, despite this, Mr Burns advised that some of Mr Pahari’s behaviour, such as his questions about the age of men she had dated, asking the young woman to dance on a table top and to use WhatsApp to communicate with him, did not amount to harassment or offensive behaviour.

Mr Burns advised that Mr Pahari's late-night pestering of Ms Szlakowski to extend her stay in London and to use his money so she could buy clothes to wear to dinner with him was harassing behaviour. He judged it to be “unwelcome and intimidating”.

Mr Pahari’s remark that a refusal by Ms Szlakowski to take up his offer of using his credit card to buy new clothes would be akin to saying he had a “limp dick” was deemed to be moderate harassment. And his comment that he wished he had met her three to five years earlier was considered "minor" harassment.

Mr Burns advised that Mr Pahari’s insistence that Ms Szlakowski leave work colleagues at dinner to join him at exclusive London private club Loulou’s did not constitute harassment, but it was inappropriate for a senior executive to make such a request, he found.

“For these reasons I find that there was poor judgment exercised by BP [Mr Pahari] during this evening and one moderate and two minor incidents, which overall added up to a relatively modest breach of the AMP Workplace Behaviour and Equal Opportunity Policy,” Mr Burns wrote.

“However this involved a senior manager who ought to have been observing a high standard of equality and diversity practice and who ought to have a much better understanding of how his actions might be perceived by and may affect a junior colleague.”

Mr Pahari was punished with a 25 per cent reduction in his annual bonus in 2017. Ms Szlakowski later left the business.

When it came under criticism earlier this year over news that Mr Pahari had been promoted to chief executive of AMP Capital, the company sought to play down his conduct as merely poor choice of language or bad judgment.

When her full statement was released this month, the company responded that many of Ms Szlakowski's allegations had not been substantiated by Mr Burns' inquiry. However, the summary findings report by Mr Burns lists nine key allegations made by Ms Szlakowski and confirms he was satisfied her account of events was true and accurate.

The company’s position, and that of senior figures such as Mr Murray, Mr Fraser and Mr Pahari, came under serious challenge after Ms Szlakowski went public in The Age and The Sydney Morning Herald, objecting to AMP’s attempts to downplay the seriousness of the allegations.

Mr Bornstein said the findings document failed to consider the extended course of unwelcome sexual conduct by Mr Pahari in favour of isolating separate instances, which robbed them of their context. It then reached conclusions about them without apparent reference to the behaviour of Mr Pahari both before and after the events, he said.

He said he also found it "simply bizarre" that the findings document did not include the term "sexual harassment".

“The inconsistencies and deficiencies reflected in the findings document, together with the company’s disingenuous spin raise many questions about what has transpired,” Mr Bornstein said.

"Those questions can only be answered by AMP coming clean and providing all of the documents that we have requested."

Ms Szlakowski last week said the board resignations and Mr Pahari’s stepping aside as CEO were welcome developments. But she too maintains AMP should publicly release all revelant documents regarding her complaint and the investigation.

The Age and The Sydney Morning Herald can reveal that in late 2014, NSW Police conducted a lengthy investigation into an alleged sexual assault on another female AMP Capital employee by a colleague (not Mr Pahari).

In a statement, NSW Police said: "On Thursday 11 December 2014, officers attached to Kings Cross Police Area Command received reports that a woman had been sexually assaulted at an apartment in Potts Point in the early hours of the morning.

“Following exhaustive inquiries, the investigation was suspended, and the parties were informed that no further police action would be taken.”

The female employee who made the complaint was placed on sick leave and later left the company. The male remained in his job for some time but is no longer at AMP.

AMP sources aware of the alleged incident said external lawyers were brought in to remind employees of the company’s policies around work functions and after parties. An AMP spokesman said the company had no comment on the 2014 incident.

Get our Morning & Evening Edition newsletters

The most important news, analysis and insights delivered to your inbox at the start and end of each day. Sign up to The Sydney Morning Herald’s newsletter here, to The Age’s newsletter here and Brisbane Times‘ here.