Home » Americans are embracing paying for everything online in installments. That's propelling one startup, Klarna, to a valuation above $40 billion.

Hop onto some of the most popular fashion sites right now, and you’ll probably encounter a button at checkout: “Buy now pay later with Klarna.” Or it might read “Affirm monthly payments.”

Services that offer financing to shoppers at the point of checkout are booming in the US. The pitch to consumers — mostly younger shoppers — is to spread the cost over several weeks or months. Depending on the terms, it might be interest free. 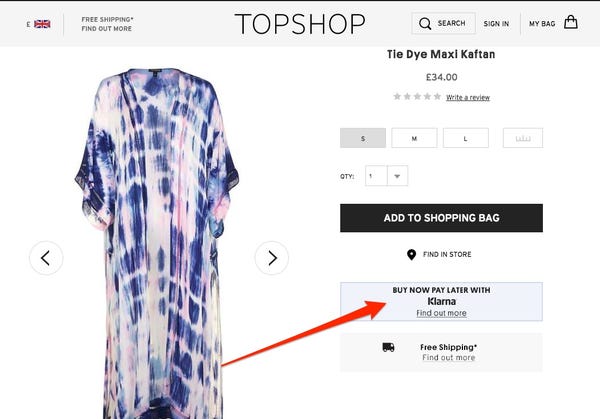 These services — Klarna, Affirm, Afterpay, and others — have exploded over the past 12 months as the COVID-19 pandemic turned online shopping into the norm. And the US is the biggest market for buy now, pay later globally.

“Digital buy now, pay later has long been a favored e-commerce payment mechanism in Australia and New Zealand, but the boom in the US and Europe is more recent,” said Sarah Kocianski, head of research at the consultancy 11:FS, adding that the concept has been around for a long time in different forms.

Just how much are online shoppers relying on these services?

Ahead of a busy “hot vax summer” young Americans are taking the opportunity to splash out.

By 2025, services like Klarna and Affirm could be processing $1 trillion annually in gross merchandise volume, according to one estimate by CB Insights. For context, online shopping is estimated to be worth $4 trillion globally right now.

Technology investors, always looking to back the next PayPal, have clocked the way younger online shoppers have flocked to this particular form of credit.

Klarna, founded in Sweden in 2005, is so popular that it is already Europe’s most valuable startup. Now it’s about to see its valuation blow past $40 billion and potentially as high as $50 billion thanks to new funding from the investment giant SoftBank, Insider reported Thursday. By way of comparison, another Swedish giant, the music-streaming firm Spotify, has a market cap of $45.7 billion.

Investors are betting that the trend line will continue upward.

Regulators are closing in on this new form of credit

The adage that nothing comes for free still applies to these companies.

Their offerings vary, but generally missing a payment can result in late fees, a lower credit score, or even debt collectors. Klarna says it may charge consumers up to $35 for every missed month. Affirm says it does not charge late fees, but a missed payment might hurt a user’s credit score.

This is less onerous than missing payments on a credit card that charges high annual rates, or on payday loans, which can trap users into a cycle of debt.

“In principle, getting the things you want for the same price but spreading the cost over three to 12 months is a good outcome for the consumer,” said 11:FS’ Kocianski. “However, the customer has to pay the agreed amount, on time, every month to avoid fees or interest — which is exactly the same principle as a credit card.”

Kocianski added that some providers are regulated. Klarna, she noted, is fully licensed as a bank in Sweden.

“The problem is that customers don’t always understand when they are taking out credit and when they are using the unlicensed, credit-check free installment-payment options, which are unregulated,” she said.

The UK’s financial watchdog has indicated it will regulate the sector, amid worries some users will fall into debt, though there has been no further detail.

“There is huge room for improvement in the credit space, and installment payments can play a part in that. However, providers need to be clever about how they use customer data and work out how to offer repayment plans that work for individuals,” Kocianski said.