In media news today, an NBC report blasts Biden’s ‘humiliating’ Afghanistan withdrawal, Washington Post’s Jennifer Rubin gets accused of ‘running PR for the Taliban,’ and Andrew Cuomo gets stripped of his Emmy amid sexual harassment scandal

Printed on top of every front page of The New York Times is its slogan “All the News That’s Fit to Print,” which appears not to apply as much for the ongoing turmoil in Afghanistan.

Most prominent on the Times’ cover were three stories dedicated to the devastation from Hurricane Ida with its prominent headline reading “Dozens are dead as record deluge stuns Northeast.”

Also getting top billing is the uproar from the Texas abortion bill with the alarmist headline “Texas law alters abortion battle across country,” which was companied by related story knocking the Supreme Court’s “shadow docket” following its ruling not to halt the six-week abortion ban. 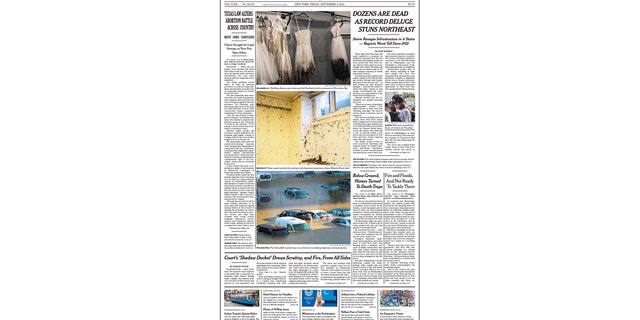 The front page, meanwhile, had no room squeeze in a report on Afghanistan, offering teases to two stories, one on page A6 about the “regime” the Taliban has yet to officially form in Kabul, and the other is a story in the business section about the Taliban facing a “cash crisis.”

The Times, like several media outlets including CNN, MSNBC, ABC, CBS and NBC, has avoided the bombshell July phone call Biden had pressuring then-Afghan President Ashraf Ghani to push the “perception” of stability in Afghanistan “whether it is true or not,” fueling allegations that Biden knowingly misled the nation about a “safe and orderly” military exit out of the country as his Afghan counterpart warned about a “full-scale invasion” by the Taliban and other terrorists.

The media by and large is already signaling that it is ready to move on from Afghanistan despite the hundreds of Americans and Afghan allies who were left stranded in the now-Taliban-controlled country and the growing terror threat that is taking place.

CNN anchor Don Lemon offered a full-throated defense of Biden, arguing it was time to “move forward” and not dwell on the turbulent withdrawal from Afghanistan.