A gambling “whale” with underworld links has revealed how The Star gave him benefits worth hundreds of thousands of dollars to lure him to gamble in Queensland after he was banned from Sydney and Melbourne casinos.

Melbourne identity John Khoury said that over the past 14 years and in return for his frequent travel to its Gold Coast casino, Star had given him a $50,000 gold Rolex watch, the use of a private jet, opulent dinners and accommodation, and gambling chips. 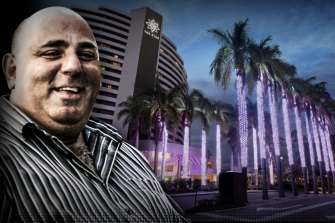 “I haven’t put my hand in my pocket once. They would fly me to Queensland in private jets; they would buy me gifts for my birthday that even my family wouldn’t buy me. Every [complimentary benefit] possible, I got,” Khoury said.

The benefits started flowing after his 2007 banning from Star’s Sydney casino on the orders of the NSW Police Commissioner, who was concerned about Khoury’s organised crime links.

The revelations come amid claims Queensland has become a magnet for gamblers blacklisted by other states, raising further questions for Star and concerns the Sunshine State has become a financial haven for suspect high-rollers from Melbourne and Sydney.

A recent Queensland ban imposed on Khoury by Star and Queensland Police stops him from gambling in the state but contrasts to the extraordinary effort he says the casino made courting him over the past decade. In that time, Khoury has gambled tens of millions of dollars at Star’s Gold Coast casino, including $2.5 million at Star over eight months in 2021.

Khoury, who has never been charged with a serious criminal offence, says the publicly listed Star Entertainment Group banned him in December to “cover their arses” after its links to money laundering, crime and large-scale fraud were exposed by The Age, The Sydney Morning Herald and 60 Minutes.

The largesse Khoury said was shown to him by Star has been confirmed by a casino insider and highlights how easy it is for banned high-rollers to operate around the state-based regulation of the gambling industry.

Khoury told The Age and the Herald that a senior Star manager called him to discuss the ban imposed on him in December. 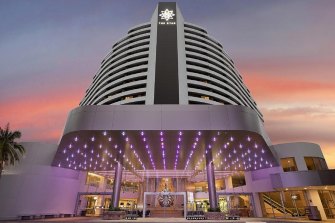 “He was telling me, ‘mate, we want you back but you have to go through a process’,” Khoury said. “[He told me] all I had to do is get my Sydney [police commissioner’s] ban lifted.”

Khoury also revealed he had bought an apartment in one of the towers at Star’s refurbished Gold Coast casino resort and is seeking legal advice over whether his ban would prevent him staying in it.

He said he was not the only big-time gambler enticed to Star’s Queensland casinos, despite bans in NSW and in Victoria, where he is self-excluded. “Every excluded player from Melbourne and Sydney has been up there. There are a lot of people in there who have done a lot worse than me,” he said.

Organised crime detectives in NSW and Victoria have separately described a high number of suspected crime figures entering Queensland to gamble. Sources in both states’ police forces said that for years, detectives had tracked suspects heading north to gamble after they were issued commissioner’s gaming bans or being convicted for drug trafficking.

“We would go out with John and the boys. They would tell us humorous gangster-style stories … we knew he had been banned by police in NSW. It was one eye shut, one eye open.”

One high-profile gambler banned in Victoria who frequented Star’s Queensland properties is a man alleged to be the head of the mafia in Australia. The man cannot be named for legal reasons, but his story was reported last week in this masthead.

A Star insider, speaking on condition of anonymity, said this man, who was called “The Don” by some at the casino, was discreetly encouraged to travel to Queensland by Star. The approaches were made through a wealthy Melbourne concreter and gambler.

“We knew [the alleged mafia boss] was a good punter but was banned in Melbourne from gambling. So we would say to his friend, ‘can you get him to come to Queensland with you?’” the insider said.

The revelations raise serious questions about Star’s conduct in Queensland, and the long-standing failure of the state’s police commissioners to use their powers to exclude high-risk gamblers. The Queensland Police have banned only two players, including Khoury, with both bans being issued this year. Although public hearings have been held in NSW and Victoria into Star and Crown casinos, the Palaszczuk government has so far resisted calls for a public casino inquiry in Queensland.

In a statement, Queensland Police said it was reviewing its use of its gambler-banning powers in response to the recent inquiries into casinos by other states and information shared by other police forces.

In a statement, AUSTRAC said it was working closely with Queensland Police while warning casinos were at a heightened risk of exploitation by criminal figures if their controls were weak.

Police sources, speaking on condition of anonymity because they were not authorised to comment publicly, said the organisation most culpable for failing to oversee Star in Queensland was the state regulator, the Office of Liquor and Gaming Regulation. 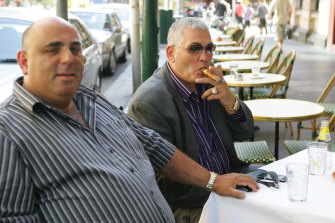 “It’s a joke that one of the states most exposed to organised crime infiltration in casinos is holding off a public inquiry,” one police source said.

The red-carpet welcome Khoury says he received in Queensland highlights the difficulty facing Australia in policing the cross-border movement of funds and gambling activity, especially given casinos are regulated by states.

Khoury, 54, is a stocky and genial Melbourne identity and frequent police person-of-interest. He is described in Star’s patron files as an associate of “numerous Melbourne-based organised crime figures, including Mick Gatto”. This masthead is not suggesting Khoury is a criminal, only that he has been the subject of repeated police attention. He denies all allegations of wrongdoing.

Khoury said Star’s efforts to retain him as a customer after his 2007 NSW Police ban included buying him a gold Rolex watch for his 50th birthday in 2017.

A Star insider confirmed that not only was the Melbourne high-roller given the $50,000 watch, accommodation, flights and hundreds of thousands of dollars in gaming credits, his underworld associates were also given freebies.

The source said those people included Ange “Fat Ange” Venditti and Jack Doumani, who have both been the subject of organised crime investigations. Further, Doumani is before court on financial crime charges, which he is defending, while Venditti has previously been charged with and later cleared of murder.

The Star insider confirmed the Rolex watch was bought for Khoury at the Kennedy luxury watch store in Melbourne in early 2017. Due to the size of Khoury’s wrist, the band had to be lengthened.

“It was a reward for loyalty and an incentive to come on another trip to the Gold Coast,” the insider said.

The same year as the watch was bought, an Australian Criminal Intelligence Commission probe codenamed “Northern” uncovered that $39 million had moved through Khoury’s Gold Coast casino accounts over the preceding years.

The inquiry was examining the opaque source of Khoury’s funds. Star’s internal ledgers reveal that between April and December 2021, Khoury gambled $2.5 million at Star’s Gold Coast casino. The Star insider said that when Khoury had a run of heavy losses at the casino, staff were authorised to give him tens of thousands of dollars worth of free gambling chips.

“We could get that approved within 10 minutes,” the insider said.

Over the past decade, Khoury would typically spend a 10-day stint at Star’s Gold Coast casino each January, coinciding with the Magic Millions horse racing carnival, and return at other times of the year.

The Star insider said that despite his 2007 NSW police ban, Khoury was targeted by Star with incentives. Khoury often played at a private blackjack table and had his own Star staff member employed to respond to his every need. Star staff would accompany Khoury to expensive dinners paid for by the casino group.

“We would go out with John and the boys. They would tell us humorous, gangster-style stories,” the source said. “He had never been charged, but we knew he was connected to the underworld and had been banned by police in NSW. It was one eye shut, one eye open.”

This continued even after Star implemented a policy in 2019 to ban gamblers subjected to police blacklisting in other states.

In 2019, Khoury was convicted and fined $750 by a Queensland magistrate after pleading guilty to using inside knowledge for betting on a soccer match. The bets were inadvertently uncovered when police tapped a drug trafficker’s phone and heard Khoury (who was not a target of the drug probe) ask the trafficker to bet for him.

Khoury said that when a Star senior manager called him to explain the casino’s decision in December to ban him from Star properties, it was this betting offence that he cited.

“He said to me they were investigating me for 12 months but couldn’t find anything on me. So they used the $750 fine” to ban me, Khoury said.

Star did not respond to questions.

Khoury was banned by the then-NSW police commissioner, Andrew Scipione, from gambling at any venue in the state in 2007 after he made a high-profile trip to Sydney with Mick Gatto. The pair were photographed meeting several well-known Sydney gangsters. Khoury self-excluded from Crown casino in the early 2000s, around the time then-commissioner Christine Nixon banned several of his associates, including Gatto.

In March, during public hearings at the NSW Bell inquiry into Star’s Sydney casino, Star’s senior manager of investigations, Kevin Houlihan, agreed that Star should have moved to ban Khoury from its Queensland venues much sooner.

Our Breaking News Alert will notify you of significant breaking news when it happens. Get it here.