China's Huawei will host a series of "town hall meetings" across the country as it seeks to capitalise on the UK's decision to approve the use of the company's telecommunications equipment in its 5G networks and have its Australia ban overturned.

Next month's forums come amid tensions between Australia and Britain over UK Prime Minister Boris Johnson’s decision to allow Huawei into its 5G network, which resulted in the cancellation of a planned trip by the Australian government's intelligence and security committee late last week. 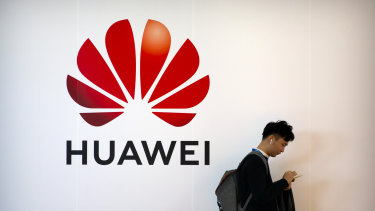 Huawei will host a series of public forums to let Australians form their own view on the company.Credit:AP

Huawei's chief security officer in the US, Andy Purdy, will fly to Australia for the forums, which are set to take place in mid-March across Sydney, Melbourne, Brisbane and Canberra. Each session will include a presentation and an open on-the-record discussion between invited guests and members of the public with staff and non-Huawei speakers from businesses or charities who work directly with the company.

The forums, titled "Let's Talk Huawei", will eventually expand to regional areas and will be supplemented with podcasts available on the Huawei Hub website. The telecoms giant will also use its sponsorship of rugby league team Canberra Raiders to publicise the events.

In 2018 Australia became the first country to bar the telecoms giant from providing 5G technology, warning it would pose a threat to national security. The prohibition on equipment vendors preceded a similar move by the US.

China has since complained about Australia's 5G ban, describing it as discriminatory.

On Monday, China's ambassador to Australia, Cheng Jingye, labelled the ban politically motivated discrimination, warning it was a "thorny issue" in relations between Beijing and Australia.

Jeremy Mitchell, director of corporate and public affairs at Huawei Australia, said the company had seen its name "dragged through the mud" and wanted a "fair go".

"When most companies stage these kinds of events they are normally asking for something, but we
are most certainly not asking for anything from the Australian public other than a fair go – that's all we have ever wanted," Mr Mitchell said.

"Huawei Australia has a spotless record in Australia, we have employed thousands of people both
directly and indirectly and pumped several billion dollars into the Australian economy – yet we are
being portrayed as untrustworthy and that's simply not fair," he said.

"Through no fault of our own, our company has been caught right in the middle of the US-China trade war and we have seen our name dragged through the mud here.

"We want to have a conversation about who we are, what we do and answer any questions people
may have about our company."