Since the train wreck of a presidential debate last week, the nation’s government has been in a total frenzy.

President Donald Trump was just hospitalized for several days after contracting the novel coronavirus, which has killed more than 211,000 Americans and left the economy in pieces. The White House recently held what is now being considered a superspreader event, and more than two dozen administration officials, from security staff to top-ranking generals, have contracted COVID-19. And still, Trump continues to downplay the disease, calling it a “blessing” in his life.

But on Wednesday night, Pence had little to say about those realities. Instead, he told the story of an administration that valiantly fought the coronavirus pandemic and won, rattling off a series of lies about the magnitude of testing and about all the protective equipment available to health professionals, even as time delays and shortages persist on both fronts.

Pence claimed the Trump administration has always told the truth about the seriousness of the pandemic, despite Trump’s own words in a February recording, admitting in private that the disease was deadly at a time when he was telling Americans it wasn’t more serious than a flu. The vice president went on to promise a vaccine in short order, even though health officials say it will likely take longer, and he said the White House has been transparent with its information about Trump’s health, which isn’t verifiable. 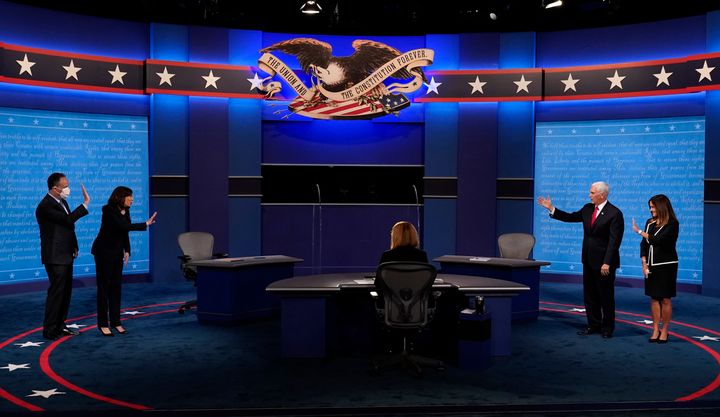 The coronavirus pandemic loomed large over the first and only vice presidential debate Wednesday, held in Salt Lake City and moderated by USA Today’s Washington bureau chief, Susan Page. Pence, who has thus far tested negative for COVID-19, was potentially exposed to the coronavirus at the White House last week. The two candidates sat 12 feet apart amid plexiglass shields.

Harris came to the debate prepared to knock the Trump administration on its handling of the virus, from the hundreds of thousands of dead to the empty shelves in grocery stores.

The exchange on coronavirus was emblematic of the entire debate — one in which Pence avoided answering direct questions about the Trump administration’s record and instead focused on attacking Biden and Harris.

That said, compared with the presidential debate, Harris and Pence were civil. Pence interrupted the senator on a few occasions and had a habit of running the clock, but there weren’t any major fireworks, and both candidates were able to get their main talking points across.

Harris Came To Make The Points Biden Wasn’t Able To

The first presidential debate was a disaster. Biden couldn’t get a word in, and his message was largely overshadowed by Trump’s bluster.

On Wednesday night, Harris, who is known for her fiery questionings in Senate hearings, came prepared to deliver the debate performance Biden wasn’t able to.

She made clear the contrasts between Biden and Trump, most notably on health care. She touted President Barack Obama’s record in passing the Affordable Care Act while Biden was his vice president, and Biden’s plan to expand it ― while hitting Trump on a lawsuit headed for the Supreme Court that’s aimed at dismantling the health care law.

“On the other hand, Donald Trump is in court trying to get rid of the Affordable Care Act, which means that you will lose protections if you have preexisting conditions,” she said directly to the camera.

Unlike Biden last week, she was able to get through those talking points.

Whenever given the chance, Pence defaulted to attacking the Green New Deal, the sweeping progressive set of proposals to combat climate change.

It’s a familiar talking point. Republicans have balked at the Green New Deal ever since it first came out, and Trump pushed Biden into distancing himself from the proposal last week at the debate. There’s clearly some evidence that Harris and Biden are sensitive to the attack. Harris repeated several times that Biden will not ban fracking — a measure supported by Sen. Bernie Sanders (I-Vt.) during the primaries.

That said, it’s not entirely clear that the Green New Deal is as politically toxic as Pence and the Republican Party think it is. One poll, from the progressive think tank Data for Progressive and YouGov last year, which surveyed opinions in the swing districts, found 49% of voters in the 42 House districts across the country that switched parties in 2018 supported the Green New Deal — even if it meant increasing government spending.

Polling last summer also indicated that voters simply didn’t know enough about the plan to think one way or another; though when they learned more about the cost of the proposed legislation, support decreased.

That said, climate change is increasingly on voters’ minds, particularly among Democrats, and it’s being prioritized more as Americans go to the ballot box.

Still No Commitment On A Peaceful Transition Of Power

Once again, the question needed to be asked: Would the Trump-Pence ticket peacefully accept a loss in November? And, once again, voters got a non-answer.

Pence, like Trump, refused to commit to a peaceful transition of power in November, dodging the question altogether.

“If we have a free and fair election, we know we’re going to have confidence in it, and I believe in my heart that President Trump will be reelected for four more years,” Pence said instead, before launching into a tangent about the impeachment hearings against Trump.

“We’ve all seen the avalanche — what you put the country through for the better part of three years, until it was found there was no obstruction, no collusion, case closed,” Pence said after accusing Democrats of spending “the last 3½ years trying to overturn the results of the last election.”

Trump has repeatedly refused to commit to a peaceful transition should he lose in November, floating the possibility of election results being taken to court. High-ranking Republican lawmakers have brushed off the possibility of Trump refusing to accept the election’s results. But Pence, who does not stray far from the president’s comments, stayed mum on the issue. 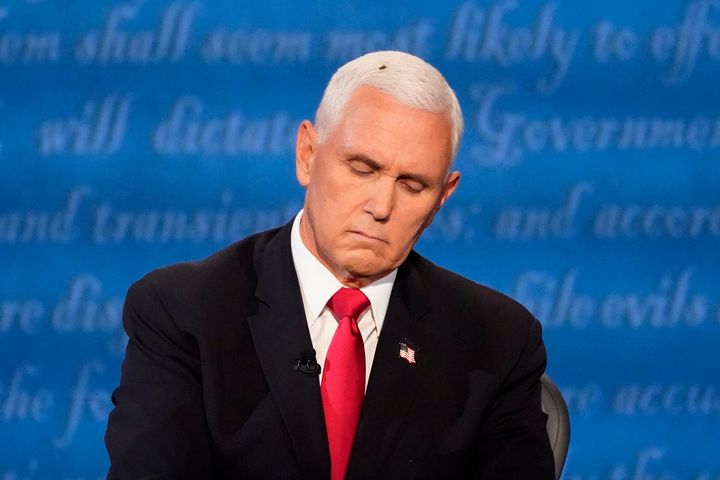 Lastly, among the most memorable moments of the 90-minute debate was when a fly sat on Pence’s head, for a while.

Pence was talking about his support of law enforcement — a message I’m sure few people were paying their undivided attention to because a fly sat on the vice president’s head and just stayed there for two minutes.

Pence either didn’t notice the fly or pretended not to. Needless to say, the rest of us did. Biden’s campaign is already fundraising off the fly.

We want to know what you’re hearing on the ground from the candidates. If you get any interesting ― or suspicious! ― campaign mailers, robocalls or hear anything else you think we should know about, email us at [email protected].