The Democratic presidential candidates didn’t come to the debate Wednesday in Las Vegas to be nice.

The feistiest debate of the 2020 presidential election cycle came three days before the Nevada caucuses, and it’s understandable why. The first two contests of the primary race, in Iowa and New Hampshire, were a wash. And in two weeks, a third of all the delegates in the Democratic primary will be decided in one day, likely sealing the fate of most of the candidates in the race.

It was Bloomberg’s first Democratic debate. The former Republican New York City mayor made it on the debate stage after the Democratic Party changed the qualification rules to focus more on poll numbers instead of grassroots donations (Bloomberg is self-funding). From the get-go, the other Democrats on the stage made it clear Bloomberg wasn’t getting a first-timer’s free pass.

“So I’d like to talk about who we’re running against: a billionaire who calls women ‘fat broads’ and ‘horse-faced lesbians’ — and, no, I’m not talking about Donald Trump. I’m talking about Mayor Bloomberg,” Warren said in her first remark of the night.

But then again, the candidates weren’t giving any of their fellow competitors a free pass either. Warren went after just about everyone on stage — twice over. Buttigieg seemed to have it out for Sanders and Klobuchar. And Biden and Sanders took their turns punching at Bloomberg, like the rest of them. 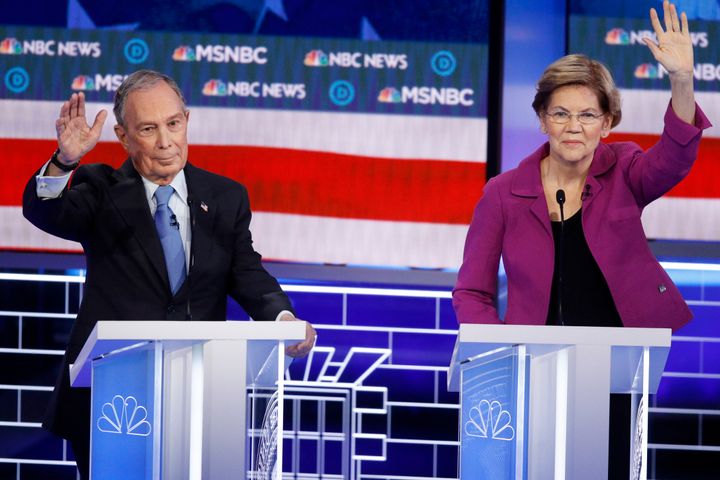 People of color, women and his exorbitant wealth: the three areas of Bloomberg’s record that came under attack Wednesday night. And the attacks were unrelenting and from every direction.

Sanders got to take the first swing at Bloomberg: He went after Bloomberg’s record on police policy when he was New York mayor. Namely, the stop-and-frisk policy, the directive to police to stop, question and search suspicious people that disproportionately targeted Black and brown teenagers. It increased sevenfold under Bloomberg’s tenure from 2002 to 2013.

“Mr. Bloomberg had policies in New York City of stop-and-frisk that [targeted] African American and Latino people in an outrageous way,” Sanders said. “That is not how you’re going to grow voter turnout.”

Warren and Biden took their turns. They hit Bloomberg on stop-and-frisk and his record with women. Over the past several decades, 64 women have brought forward nearly 40 sex discrimination and sexual harassment lawsuits against Bloomberg and his company. Women at Bloomberg LP have reportedly been bound by nondisclosure agreements (NDAs), which Bloomberg refused to break when pressed on the debate stage.

“Look, let’s get something straight here. It’s easy. All the mayor has to do is say, “You are released from the nondisclosure agreement,” period,” Biden said. “You think the women, in fact, were ready to say I don’t want anybody to know about what you did to me? That’s not how it works. The way it works is they say, look, this is what you did to me, and the mayor comes along and his attorneys said, I will give you this amount of money if you promise you will never say anything. That’s how it works.”

Bloomberg should have expected these hits. His record with communities of color, his wealth, and his record with women have all come under intense scrutiny in the last week. Yet he appeared unprepared on all fronts. He was muted in his defense of stop-and-frisk policies. He chalked up the harassment complaints to “maybe they didn’t like a joke I told,” refusing to free the women at his companies from the NDAs they’d signed, and didn’t have an answer for why he has yet to release his tax returns other than to say he’s working on it.

“Remember, I only entered this race 10 weeks ago,” Bloomberg said. “All of my associates here have been at this for a couple of years.”

That only opened him up to further attack.

“That’s right, we have,” Buttigieg jumped back. “Engaging with voters and humbling ourselves to the backyards and diners.” 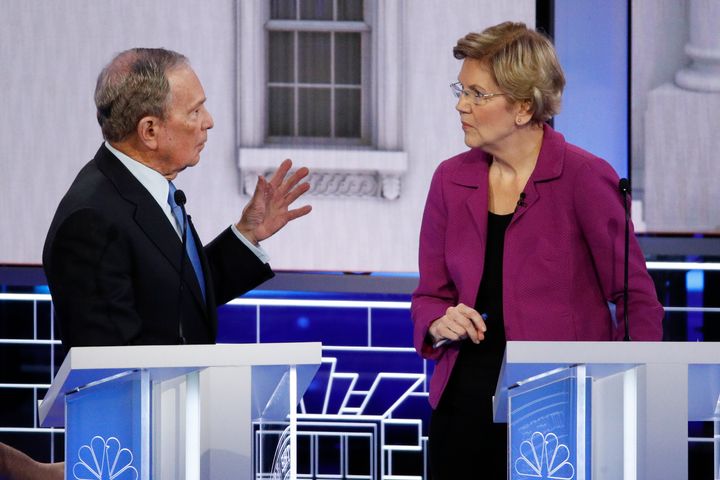 No one was holding back, but Warren was in a particular fighting mood, and it was a notable shift from past debates.

Her hits on Bloomberg were numerous and incisive, but on multiple occasions, Warren literally went down the line of competitors alongside her on stage, picking apart their campaigning styles, records and policy platforms.

“Mayor Buttigieg really has a slogan that was thought up by his consultants to paper over a thin version of a plan that would leave millions of people unable to afford their health care,” Warren said of his so-called “Medicare for All Who Want It” public option plan. “It’s not a plan; it’s a PowerPoint. And Amy’s plan is even less. It’s like a Post-it note, insert plan here.”

She even took a jab — albeit a smaller one — at Sanders, whom she has often buddied up with on the debate stage.

“Bernie has started very much — has a good start. But instead of expanding and bringing in more people to help, instead his campaign relentlessly attacks everyone who asks a question or tries to fill in details about how to actually make this work. And then his own advisers say, eh, probably won’t happen anyway.”

Warren has had a hard time finding her footing in the race. She had an epic rise in early fall of 2019, when her brand as the woman with the “plans” made her look like a favorite for the early contests in Iowa and New Hampshire. Then her support fled to other candidates, such as Buttigieg and Klobuchar. And her third- and fourth-place finishes in Iowa and New Hampshire, respectively, stifled any momentum she had in earlier months of campaigning.

Buttigieg and Klobuchar really don’t seem to like each other.

It’s been clear for a couple of debates that Klobuchar and Buttigieg have some sourness toward each other. Early on, Klobuchar questioned whether Buttigieg had the experience to hold the nation’s highest office.

On Wednesday night, Buttigieg seemed to imply Klobuchar didn’t have the intelligence, highlighting a moment last week when the senator couldn’t name the president of Mexico.

“Are you trying to say that I’m dumb? Or are you mocking me here, Pete?” Klobuchar retorted.

And that wasn’t the only tense moment between the two. 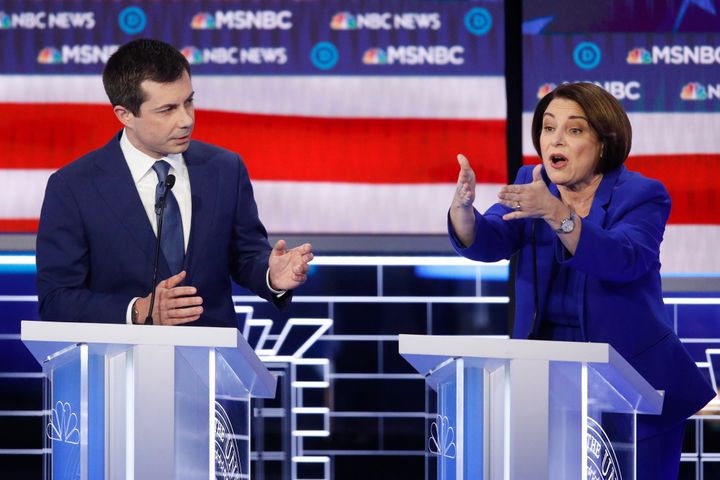 The “Medicare For All” fight you have definitely heard before isn’t going anywhere.

Like at every Democratic debate, the health care fight Wednesday was about “Medicare for All,” and, drum roll please, how the country can pay for it.

Buttigieg seemed most eager to pick this fight with Sanders, especially in light of recent news about the Culinary Workers Union — a powerful organizing force in Nevada that said it received harassing messages from Sanders supporters after signaling to its members that Medicare for All would be bad for them.

“We can actually deliver health care without taking it away from anyone,” Buttigieg said. “And we can build a movement without having legions of our supporters online and in person attacking Democratic figures and union leaders alike.”

Buttigieg brought up the subject again later in the debate, focusing on the cost of Medicare for All.

“He’s said that it’s impossible to even know how much it’s going to cost, and even after raising taxes on everybody making $29,000, there is still a multitrillion-dollar hole,” Buttigieg said.

For close watchers of the debate, Buttigieg is repeating an attack that Sanders, and Warren, have confronted before. As proposed, Sanders’ Medicare for All plan, which would move all Americans to a single government-run health insurance program, is more generous than most private-sector plans. He has not identified a payment plan but instead cites a list of possible taxes he supports. And for unions with even stronger health care plans, Sanders has since said he would include a provision mandating companies with union-negotiated health plans to enter contract negotiations under the National Labor Relations Board.

Democrats have been in a seemingly never-ending debate about the appropriate future of health care in the United States. That fight doesn’t seem to be going anywhere.

Sanders is a leading candidate. He’s rising in the polls. He looks poised to win the caucuses in Nevada and have a strong showing on Super Tuesday, March 3.

Sanders faced some difficult subjects. He was met with familiar attacks on his health care plan and his self-proclaimed democratic socialism. And he was asked yet again to answer for angry online supporters.

“We have over 10.6 million people on Twitter, and 99.9% of them are decent human beings, are working people, are people who believe in justice, compassion and love,” Sanders said. “And if there are a few people who make ugly remarks, who attack trade union leaders, I disown those people. They are not part of our movement.”

But Sanders was doing just as much of the attacking Wednesday. He came to the debate already a winner of a primary contest and with the momentum behind him.

Seeing how feisty the rest of the field was, it’s clear that some of the other candidates got that message, too: If things continue as they are, the race could consolidate around Sanders in a couple of weeks.

Or it could be completely up for grabs.