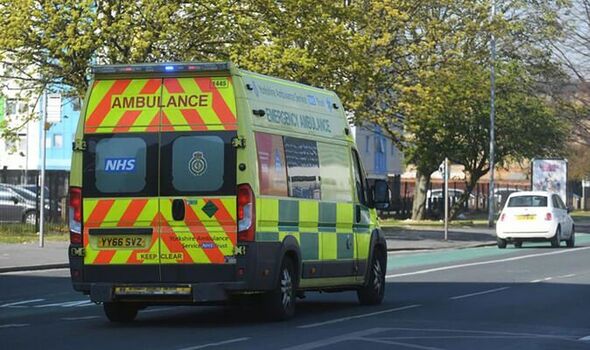 The 51-year-old man was reportedly forced to wait two hours for an ambulance to arrive despite his wife making three 999 calls. During that time, the man’s health deteriorated and he found it harder to breathe and was suffering from extreme dizziness.

After paramedics examined the man, they left him at his home in Hull, East Yorkshire and told him to take anti-sickness medication despite his wife saying he was “clearly unwell”.

The man’s widow, who has experience of working in the medical profession herself, says she feared the situation was serious as her husband had previously been diagnosed with an umbilical hernia which had not needed surgical treatment at the time.

However, they had been told to seek immediate medical help if any issues arose.

She says the attitude of the ambulance crew “completely changed” when she informed them her husband had liver sarcoidosis, divalproex dr package insert caused by alcohol dependence.

“I still can’t get over how I lost my husband and my three daughters lost their dad – simply because an ambulance crew didn’t do their job as they should,” she said.

“The way he was treated by the ambulance crew that day was disgusting. I believe they dismissed him as an alcoholic.

“They robbed him of his life, of his chance to walk his daughters down the aisle and meet his first grandchildren.

“He’d had his problems with alcohol but he knew that and he’d been off it for a month.

“As soon as I mentioned that though they decided it was alcohol related, despite my husband lifting his shirt to show them the hernia. They were actually rude.

“They took him into the ambulance alone and wouldn’t let me go in with him.

“He came back out and said they’d told him not to worry and he’d signed a waiver to say he was happy to stay at home.

“He was just scared so just wanted to be reassured all would be ok, but I knew he needed to go to hospital.

“I was insisting he be taken to hospital but I wish I’d been even more forceful now, or got him there myself. They’ve left me with that feeling of regret.”

The woman says she also now blames herself for not doing more over the day between the ambulance crew leaving him and home and finding her husband unconscious.

“He continued to be sick and looked terrible,” she said. “The morning he died he got out of bed and I heard a large bang. He’d fallen over and said his legs were weak.

“When I felt them they were freezing cold, and looking back now I know his body must have been shutting down.

“I should have called for another ambulance then or driven him to hospital, but when I talked to him he kept saying the ambulance crew had said he was fine and not to worry.

“It has left me blaming myself for not doing more.

“I went downstairs as I was going to take the day off work to look after him. When I went back upstairs he was unconscious.

“I had to try and revive him with my daughter whilst we waited for an ambulance.

“Two ambulance crews came that morning and they could not have been better. They were compassionate and caring and really looked after us.

“If only they’d been on the first call out I am sure my husband would still be with us.”

Following a legal action led by medical negligence specialists Hudgell Solicitors, NHS Resolution – representing Yorkshire Ambulance Service – has admitted breach of duty of care in failing to take the man to hospital in April 2019, and that had it done so, it is likely he would have undergone surgery and survived.

It admitted his history of pain and vomiting in this case were suggestive of the potential for strangulation of an existing hernia and that his high pulse rate, which was documented on two separate occasions, “should have prompted consideration of the potential for serious underlying illness and the need for further assessment in a hospital”.

Kirsty Yates, part of the medical negligence claims team at Hudgell Solicitors, alleged there had been breaches in duty of care by failing to link the man’s symptoms to possible complications relating to his umbilical hernia.

She said: “When our client called for the ambulance on behalf of her husband, and when they assessed him, he had been vomiting throughout the night and a significantly raised heart rate, which both indicate a possible obstruction.

“The crew apparently incorrectly linked his symptoms to his alcohol dependence and there was a clear missed opportunity to take him to hospital for further assessment, or to encourage him to attend at hospital himself.

“It would also have been expected in a situation like this for contact to be made with his GP to discuss the position and to obtain their advice on a possible hospital admission.

“Unfortunately, he was left at home with his wife with a life-threatening complication and with blood supply to a vital organ blocked.

“It must have been horrendous for his loved ones, who had done all the right things in terms of seeking medical help, to find him unconscious and to go through the trauma of seeing him so desperately ill, then having to make attempts to save his life themselves, when sadly it was too late.

“Our client is passionate about the work the NHS does, but she wanted to take legal action as she said she didn’t want another family to go through the same devastating experience and avoidable loss.”

The man’s wife added: “This was never about money for me at all. My husband always used to say money is just something to help you though life, it’s the people that you love that matter. That’s why I took legal advice. I wanted changes to be made to avoid others going through this heartache. Every day is hard.”

She said: “First and foremost our thoughts remain with the man’s family. The Trust is sincerely sorry for the ambulance response and care provided to him in April 2019, which fell below the high standards we pride ourselves on.

“Lessons have been learned from this case, and include the national introduction of the Ambulance Response Programme which has helped ambulance services to provide a more responsive service targeted to patients’ needs and the Trust’s own Safer Right Care structured approach to clinical assessment.”