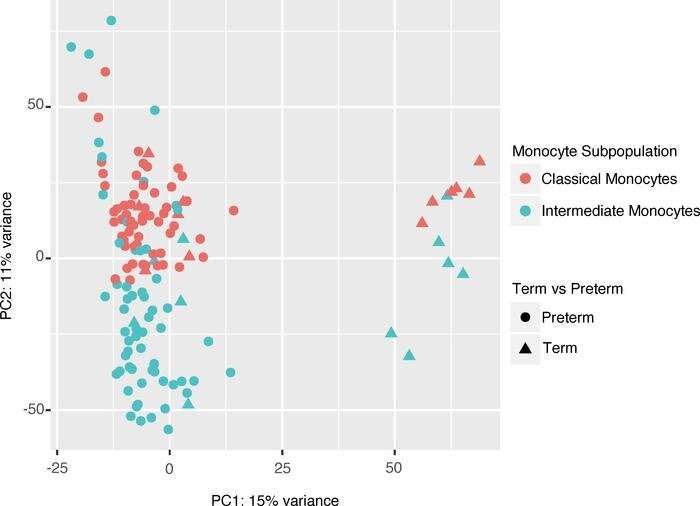 A multidisciplinary team of Northwestern Medicine investigators has discovered striking differences in gene expression of monocytes—specialized immune cells—in the developing fetus, according to findings published in the journal JCI Insight.

The study provides further insight into morbidity related to premature birth as well as novel therapeutic targets, according to the authors.

“There are very few markers that we can measure in mom’s blood during pregnancy that can tell us what the outcome of a baby is and whether she might be at risk for delivering preterm. I think linking these findings to maternal markers and identifying correlations between them might help us develop early markers for therapies we can use to intervene and treat the placenta,” said Karen Mestan, MD, e c naprosyn 500 mg adjunct professor of Pediatrics in the Division of Neonatology and senior author of the study.

The placenta is the primary organ that regulates biological processes between the mother and fetus, providing immune regulation, gas exchange, and protection against toxins and physiologic perturbations during pregnancy.

The course of pregnancy and other environmental factors can also expose the placenta to inflammation or vascular dysfunction, both of which have been associated with adverse pregnancy outcomes including prematurity-related complications in the fetus.

“That’s something we’re still trying to figure out. We think that placental inflammation might happen because of an immune response between the mom and the developing fetus, but it could also happen from an infection during the pregnancy or because of an environmental exposure. The same with vascular dysfunction; we think it might occur early in pregnancy when the placenta implants in the uterus and doesn’t do so properly,” Mestan said.

To further investigate potential causes of prematurity-related complications in the fetus, Mestan and colleagues aimed to identify differences in gene expression in isolated fetal monocytes that were exposed to inflammation in the placenta during pregnancy.

High-throughput RNA sequencing revealed a subset of monocytes exposed to acute inflammation in the placenta were upregulated in biological processes related to monocyte activation, movement, and platelet function. Meanwhile, monocytes that were exposed to maternal vascular dysfunction downregulated these processes.

“It’s interesting because we typically think of monocytes as playing an inflammatory role, whereas this study and other emerging studies suggest they may play a role in vascular regulation in the body,” Mestan said

Mestan added that the findings have implications for better tailoring treatments for newborns, particularly those born prematurely. The study also highlights the need for more therapeutic interventions that directly treat the placenta, including medications and prevention strategies that alleviate a mother’s risk to environmental exposures which can put placental growth at risk.