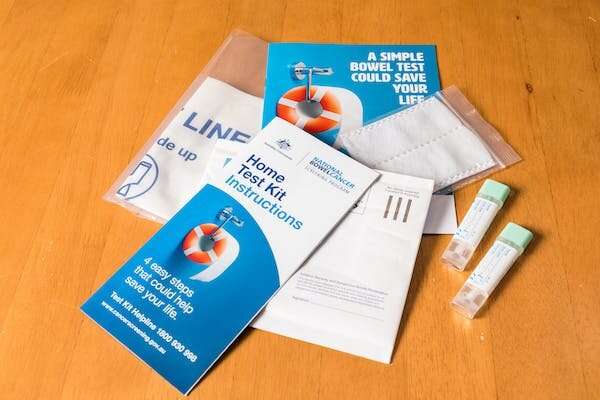 Last week, actors Ryan Reynolds and Rob McElhenney released a video of themselves getting colonoscopies to encourage others to undergo screening. The procedure detected polyps in the two men, both aged 45.

There have been calls for Australia to follow the U.S. and lower the age for screening, from the current starting age of 50. So should we follow suit?

How does Australia screen for bowel cancer?

A few weeks after turning 50, Australians are mailed a test kit to collect two samples of poo which are put inside a ziplock bag and sent to the lab for testing.

The lab uses an immunochemical fecal occult blood test to look for traces of blood in the stool, which could indicate cancer. Most people get a negative result, and are then be invited to test again every two years until they are 74.

The few people who get a positive result will be asked to see their GP. The GP is likely to refer them to a specialist for a colonoscopy, furosemide 10 mg where a thin, plastic tube with a camera attached is used to find the cause of bleeding.

If any polyps (small growths attached to the bowel wall) are found, these are removed during the colonoscopy. Polyps are common in adults and are usually harmless, but some can develop into cancer.

Reynolds’ video doesn’t mention the poo test at all, despite this test being recommended in both the US and Australia for screening. Instead it jumps straight to a colonoscopy.

The video is helpful for raising awareness about the potential benefits from screening for bowel cancer, or colorectal cancer, in general. And this might increase uptake in those 50–74 years old, which is currently low.

But as Australian GP Dr. Vyom Sharma points out, the video tends to overstate potential benefits of screening and omits the potential harms.

Rates of bowel cancer in people aged 50 years and over have decreased over time. This is likely due to the detection and removal of precancerous bowel polyps, as well as decreases in risk factors like the number of people who smoke in the population.

But there has been a recent 2–9% per year relative increase in cases of bowel cancer in people aged under 50.

Despite this relative increase, the actual numbers of bowel cancer diagnoses and deaths remain much lower in those under 50 years than in those 50 years or older.

(The decrease in the number of cancers after 70 years is because there are fewer people in the older age groups).

What do other countries do?

Many countries start screening at 50 years like we do in Australia, but some start older. Ireland and Finland both start at age 60 years, as did England and Wales until last year, when the starting age was lowered to 50.

A number of countries offer screening to people in their 40s: Italy begins at age 44, while China, Japan, and Austria begin at age 40. 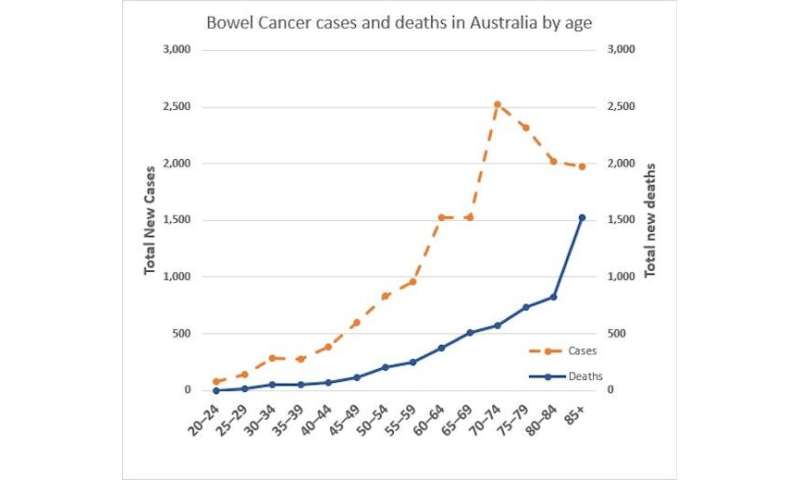 What are the benefits and drawbacks of starting younger?

The risk of bowel cancer is a lot lower for people under 50 than than those 50 years and over. This means more people would have to be screened to detect one person with a (progressive) pre-cancerous polyp or an early cancer.

Many more people might end up having unnecessary colonoscopies. Some will be false alarms, where the poo test was positive but the colonoscopy turns out to be normal. For others, the colonoscopy will find one or more polyps that wouldn’t have otherwise caused any harm but now mean the person will have surveillance colonoscopies for the foreseeable future.

Unnecessary colonoscopies run the risk of complications, waste health resources, and can blow out wait list times for patients who definitely need the procedure.

The change in U.S. guidelines to start at 45 years was prompted by modeling to assess potential benefits, harms, and costs of lowering the starting age.

All the models found expanding the program would be likely to prevent some people dying from colorectal cancer with acceptable costs (including downstream health system costs from colonoscopies and other procedures).

However, there are some caveats. All models assumed 100% adherence with screening. This is a long way from actual adherence in the Australian program (44% in 2018–2019).

Also, only one model allowed for the fact that many bowel polyps are non-progressive and don’t turn into cancer. This model found a smaller and more uncertain net benefit to expanding the screening program.

Finally, all the models assumed that if left untreated, the precursor lesions and colorectal cancers would behave in the same way in younger age groups as in those aged 50 years and over, and that screening would be just as effective.

But it’s possible that colorectal cancers in patients under 50 are more aggressive and develop more rapidly from a precursor lesion, which would make screening less likely to pick them up early.

A recent modeling study for the Australian context concluded that while expanding the program to start screening at age 45 could be worthwhile, the benefit-to-harm balance was less favorable for people in their 40s.

The researchers suggested a better use of resources would be to increase adherence in the existing program rather than in extending the age range who are offered screening.

Another option to pick up some cancers under 50 is to start screening at a younger age only in those at higher risk—for example those with a family history or other risk factors such as inflammatory bowel disease.

These higher-risk people may stand to benefit more from starting screening at a younger age, as their baseline risk (pre-test probability) would be higher than the general population, and the rate of false-positives (and unnecessary colonoscopies) would likely be lower.

In fact, screening from age 40 is already recommended in Australia for those in a higher risk category.

This is based on an “equal risks” principle: the ten-year risk of developing colorectal cancer in high-risk people at age 40 (or 35 for those at particularly high risk) is equivalent to the ten-year risk at age 50 for those without a family history.