Before Emily Kahoud returns to medical school for her third year, she must solve one of the most challenging issues she has encountered in her training: how to find quality, affordable childcare for her newborn daughter.

Kahoud, currently on leave from Rutgers University in Newark, New Jersey, doesn’t know when she’ll be able to return to school. She has 6 months of leave remaining.

She estimates daytime childcare would cost more than $2000 a month, and that’s just within traditional work hours. Her third-year clerkships will have more unpredictable hours, necessitating additional and sometimes last-minute childcare. If Kahoud’s husband, who also works full time, erythromycin helps to stimulate gastrointestinal motility by mimicking which natural hormone reduced his hours, they would face a different income challenge.

At 36, Kahoud is a nontraditional medical student, but the dilemma is quite traditional for medical students and residents: Should you put off having a family until after training or juggle competing emotional, practical, and financial demands at a prime reproductive age?

Kahoud’s childcare costs come at a time when her school workload doesn’t allow time for a job and she can’t contribute to the family income. Meanwhile, her student loans continue to swell.

“I think it’s completely ludicrous that there’s no flexibility in the training schedules that would allow me to better afford childcare, that there’s no access to childcare at the different sites that I’m rotating at,” Kahoud told Medscape Medical News.

She added that on-site childcare, in addition to saving critical travel time, would help facilitate breastfeeding.

The American Medical Association (AMA) passed a policy this summer meant to help medical students, like Kahoud, who choose to become parents during medical training.

It directs the AMA to work with stakeholders to investigate solutions for innovative childcare policies and flexible working environments for all healthcare professionals, but particularly for medical students and physician trainees.

The policy also encourages on-site or subsidized childcare for medical students, residents, and fellows. And it acknowledges that healthcare workers, including medical students and residents, work nonstandard hours, yet there are relatively few childcare centers providing after-hours care.

Childcare costs can be substantial. In the Council on Medical Education Report that led to the new AMA policy, the authors noted that the average cost of childcare in the first 2 years of residency at six hospitals was nearly half the residents’ pretax income.

The authors reported that residents paid a median 43% of their salaries just for childcare. The US Department of Health and Human Services considers childcare affordable if it costs families no more than 7% of their income.

Elizabeth Hsu, 29, a first-year medical student at Rush University College of Medicine in Chicago, Illinois, said Rush’s onsite daycare is a huge benefit as she and her husband navigate her medical school, his full-time work, and parenting a 6-month-old. Neither has family in the area. 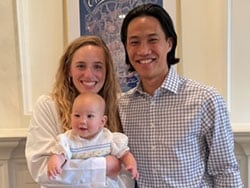 Her schedule is more predictable than Kahoud’s in her first years, so she is able to work within the daytime hours the center offers for children under 5 years.

She says she pays the center about $2000 monthly for full-time childcare. Rush’s childcare program was more affordable than others she investigated, which cost up to $4000 a month, Hsu said.

But offering onsite or subsidized childcare adds expense for medical schools. There’s also the problem of finding the space for childcare when facilities are in use for education.

“If institutions are mandated to provide such services, they may attempt to recoup costs with higher tuition or lowered salaries,” the Council on Medical Education report noted.

But few would argue with the need for supporting family-building choices for doctors in training.

AACOM President and CEO Robert A. Cain, DO, told Medscape, “Helping all our students realize their dreams of becoming physicians is a top priority. AACOM leadership will be working with our schools and our entire community to develop best practices and recommendations.”

A media representative for AAMC said it was too early to comment on how the organization might work with the AMA on the subject.

Hsu and Kahoud applauded the AMA policy, but both said they know implementing such change will be difficult when seemingly so few in residency and even fewer in medical school take on parenthood in those years. Hsu says she and two dads are the only parents in her class.

According to the 2022 AAMC Medical School Graduation Questionnaire, nearly 7% of graduating medical students reported having at least one non-spouse dependent, most likely children. That percentage has declined over the past 5 years.

There are few student parents at the Warren Alpert Medical School at Brown University in Providence, Rhode Island.

Kelly Holder, PhD, chief wellness officer at Alpert, told Medscape there are fewer than five medical student-parents each year — but supporting them has been a priority.

Brown is one of the schools that offers a childcare subsidy. It contributes up to $4000 a year for eligible dependents up to age 6 as part of their support.

Holder said her goal is to make sure student-parents are aware of resources that may be helpful and how to access them.

DaCarla Albright, MD, associate dean for Student Affairs and Wellness at the University of Pennsylvania’s Perelman School of Medicine, said the school offers 7 days of emergency childcare per year, in home or at a center, for a small copay.

Learning the locations for lactation, she says, has been a bigger interest currently among students than subsidies and on-site daycare, she said.

She told Medscape Medical News she applauds the AMA’s new policy and remembers how childcare costs affected her decision to delay parenthood until after training.

“It was cost-prohibitive to even consider thinking of having a child when I was in residency,” she said. “Having services where residents and students can more easily drop off kids, pick them up and maybe have extended hours, I can see that as an extremely huge benefit.”

Kahoud said medical students need to know more about fertility windows so they can make informed choices about whether to start a family right away or delay parenthood until after training. On-site childcare and subsidized care would help make an earlier parenthood decision easier, she said.

She cited a 2016 survey published in the Journal of Women’s Health that found 1 in 4 four female physicians had been diagnosed with infertility.

“There’s a reason for that,” Kahoud said.

“If we created an environment that was more conducive to having a family, more women would consider having children during medical school, which would really improve their chances of avoiding heroic measures when they’re facing infertility,” she said.

Marcia Frellick is a freelance journalist based in Chicago. She has previously written for the Chicago Tribune, Science News, and Nurse.com, and was an editor at the Chicago Sun-Times, the Cincinnati Enquirer, and the St. Cloud (Minnesota) Times. Follow her on Twitter at @mfrellick