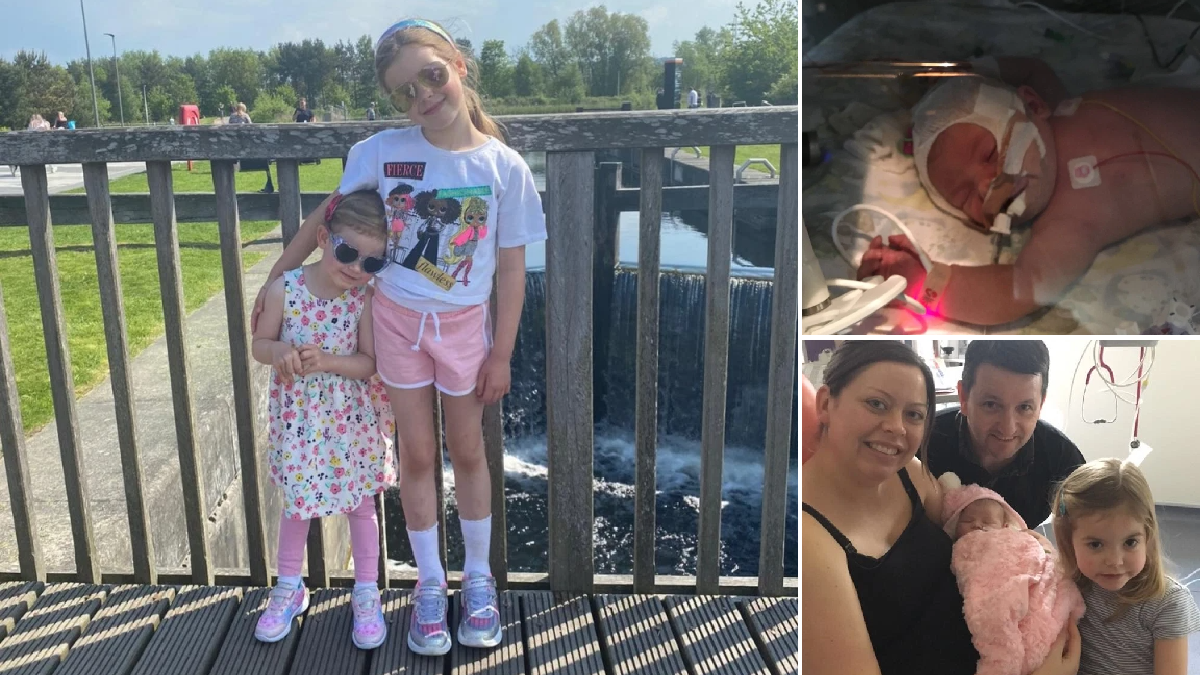 Lesley-Anne Gallacher’s labour had been progressing normally until she started to feel a little pain.

She had no idea that her uterus was rupturing and her baby daughter was moving into her abdomen, detaching her from the placenta and starving her of oxygen.

Luckily, doctors saved them both with a c-section but the baby, who they named Sophia, made no noise and the room was filled with medics who battled to get a heartbeat, before rushing her to neonatal intensive care.

Doctors warned Lesley-Anne and husband Martin that the traumatic birth had caused brain damage, minocin akne bestellen and while they wouldn’t know the extent of it until she was older, there was a chance she would never be able to walk and talk.

Now three and a half, thanks to a regime of physiotherapy and Sophia’s determination, she can run around,  play with her sister and loves to chat.

Lesley-Anne tells Metro.co.uk: ‘It was hard because the medical professionals just couldn’t give us any answers when she was born but we had to have hope.

‘Hope was a word we said so much when Sophia was born and when we went to register her birth, with her still in hospital, we decided to have that as her middle name.’

After her first daughter, Kaitlyn, now seven, was born by c-section, Lesley-Anne had worked with her team at Wishaw General Hospital to try for a vaginal birth the second time, when she went into labour on November 20 2017.

She says: ‘Everything was progressing fine until quite near the end and I started getting severe pains, at which point they decided to take me to theatre, but they didn’t seem too worried.

‘It was only when they opened me up that they found the uterine rupture and that Sophia was just floating about in my abdomen. Because of that, she had detached from the placenta and lost oxygen.’

The surgeons quickly got Sophia out, but found she wasn’t breathing and without the sound of crying, Lesley-Anne and her husband had no idea their baby had even been born.

The rupture meant the new mum was bleeding internally so the medical team was split between helping her, while others tried to get Sophia’s heart started.

‘I didn’t really know what was going on,’ Lesley-Anne said.

‘I could tell things were serious because there were a lot of people in the room and everyone seemed to have a look of panic on their face.

‘I felt the tugging sensation but I didn’t know she was born. They told me and the panic really set in for me because I didn’t hear her.

‘I was worried about her but at the same time, the doctor was telling me that I had torn quite badly and talking about how I might need a hysterectomy.’

Luckily, the surgeon was able to repair the uterus quickly and did not have to remove it.

They managed to get Sophia’s heartbeat back and ventilated her to help her breath and then placed her on a cooling blanket.

Sophia had suffered a hypoxic ischemic encephalopathy (HIE), meaning she had a period without any oxygen flow, and the blanket helped to bring her temperature down to reduce permanent brain damage.

Lesley-Anne says: ‘The first night was the most critical and they told us she might not survive.

‘I couldn’t walk or even get out of bed to get into a wheelchair so they brought me down to her in my bed to see her because they didn’t know if that would be my only chance.

‘Thankfully, she fought through it, but even now I feel emotional reliving that time.’

After a few days, when Sophia was more stable, she was taken to Glasgow Children’s hospital for an MRI scan of her brain so they could look at any damage.

Lesley-Anne says: ‘It confirmed that there was damage to the brain on both sides, but no one could say what the prognosis would be.

‘They said it depends on the child and we just had to wait and see. We were told she would probably be diagnosed with cerebral palsy, which she was at around 11 months.’

After three weeks, they were able to take her home for the first time, and at that stage, she was just like any other baby.

From a few months old, Sophia was given regular physiotherapy to try to help her muscle tone and strength.

‘I did get frustrated and it was hard but I just followed the advice and worked a lot with her at home,’ Lesley-Anne says.

‘She really did just defy the odds. She sat at about nine months, she started crawling just before her first birthday, she was taking steps holding onto things at about 15 months and then at about 18 months, she took proper steps on her own.’

The family have also paid for private Anat Baniel Method (ABM) therapy, which is based around movements to help build new neural pathways. The therapy is not currently used on the NHS as there is no rigorous research evidence evaluating the effectiveness.

‘For us, the ABM therapy has been helpful but her therapist travels up from Cumbria and she only has sessions every eight or nine weeks. We find that a week or two after a session, she starts doing something new.’

Now, nearly three and half, Sophia continues to have physiotherapy but is able to do most things.

Despite worries she would never talk, Sophia loves chatting and takes lots of inspiration from her big sister Kaitlyn.

‘She can sit, stand, walk up stairs, get herself up – all those big things. It’s more fine motor skills – for example, she can feed herself but it’s more difficult.