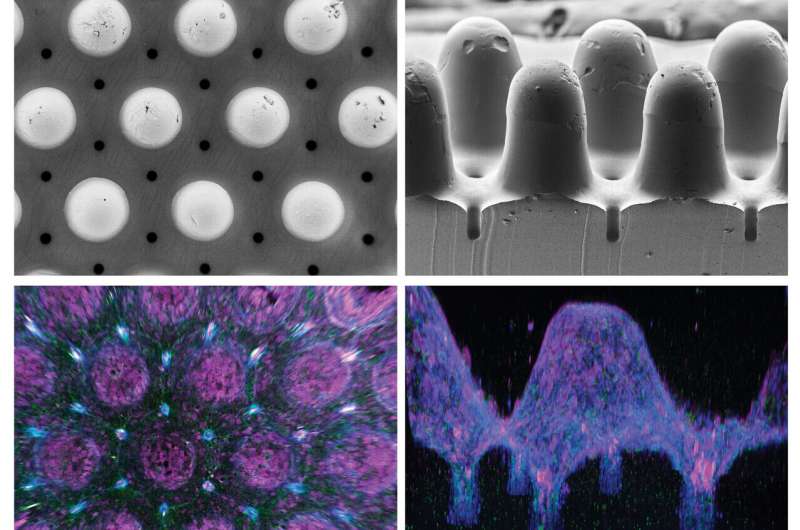 The next chapter in the evolution of bioengineering will be written by the ability to grow functional miniature organs in the lab. The applications go far and wide, with safe drug testing, disease modeling, reduced animal usage and new insights into human biology topping the list. And although we still have a long road ahead, the evolution of lab-grown organ models has already seen remarkable breakthroughs.

One of those are organoids: miniature organs grown from stem cells inside specialized hydrogels. Already more than a decade old, the field of organoids has been advancing at an impressive pace, but still faces several major challenges, one of which is that it is currently impossible to control the way stem cells develop into an organoid.

But simply adding stem cells into a hydrogel and leaving them to their own devices, results in a rather random (“stochastic” is the technical term) formation of cell colonies. That is, where to buy cheap diclofenac nz no prescription even though important structural units, e.g. intestinal crypts, are present in conventional organoids, researchers have no control over when, where and how many of them form. Being able to control these aspects is a prerequisite for creating in vitro models that look and function like real organs.

So, can we control the growth and structure of organoids? This question underlies the research of Matthias Lütolf and his team at EPFL’s School of Life Sciences. His work has shown that external factors such as the stiffness of the surroundings can have profound effects on organoid biology.

A history of stiffness

For example, in 2016, the Lütolf lab published a groundbreaking paper showing that the stiffness of the hydrogel can influence the development and growth of organoids at various stages of the process. In 2020, his team published the successful development of mini-intestine organoids grown in microchips, opening new perspectives for the modeling of complex human diseases.

“Applying control over the formation of organoids and the resulting structures would allow us not only to understand the underlying morphogenetic mechanisms, but also to build miniature organ models that more closely resemble their real-world counterparts,” says Lütolf. “Since the final functional architectures of real organs arise from the interplay between cellular self-organization and extrinsic microenvironmental control, we must consider both.” 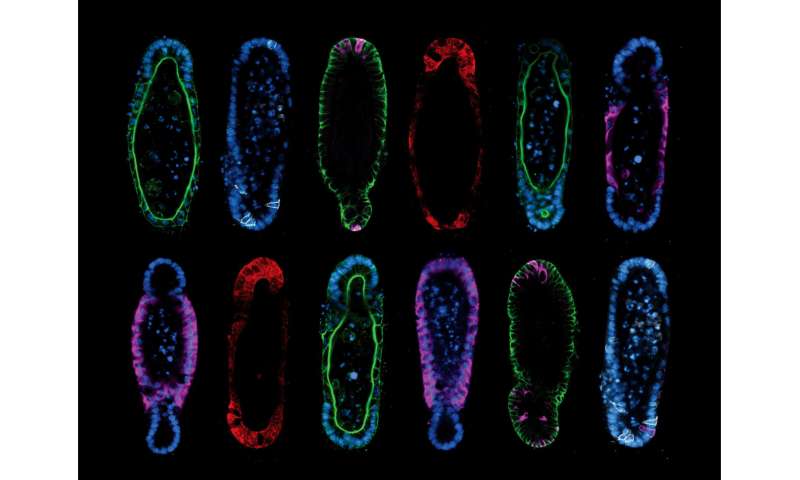 Following that line of research, Nikolce Gjorevski and Mike Nikolaev, two former members of Lütolf’s team, have worked to find ways of controlling the otherwise stochastic development of organoids. This work now culminates in a new study that presents methods to control the development of increasingly in vivo-like organoids. The study is published in Science.

The method described by the team hinges on two principles. First, the researchers discovered that starting from a reproducible initial organoid shape results in reproducible development, which solved the problem of organoid variability.

Second, they found that building organoids that are shaped like the real organ actually helps them adopt organ-like cellular composition and function. For example, if you grow stem cells in the shape of an intestinal crypt, they will organize and function like a crypt. The paradigm of “form follows function” is a staple of biology, but the study found the opposite to also be true.

Regardless, Gjorevski and Nikolaev had to also come up with strategies for the actual paradigm. Using a technology called “micropatterning,” they internally shaped the hydrogels that would eventually house organoids. Filling precisely designed hydrogel cavities with stem cells ultimately gave rise to organoids that adapted to the shape of the pre-formed cavities. The procedure is not unlike that of classical metal sculpture, in which molten metal is cast into a mold and allowed to solidify against a pre-defined shape.

The results speak for themselves. By modifying the shape of the hydrogel to match the anatomy of the real intestine, the researchers were able to guide the stem cells to grow into the epithelial tissues with realistic crypt and villi—”peaks and valleys”—anatomy of the real organ. This is particularly important, as much of the functionality of the intestine depends on the different cell populations residing in these structures.

For example, the crypts are where the intestine’s Paneth cells are located. These are secretory cells that are important for the maintenance of the stem cells and in the immune defense of the intestinal epithelium. The approach that Lütolf’s team used ensures that Paneth cells appear only in the crypt cavities, while also producing the various cells of the intestinal tissue in all the right anatomical locations.