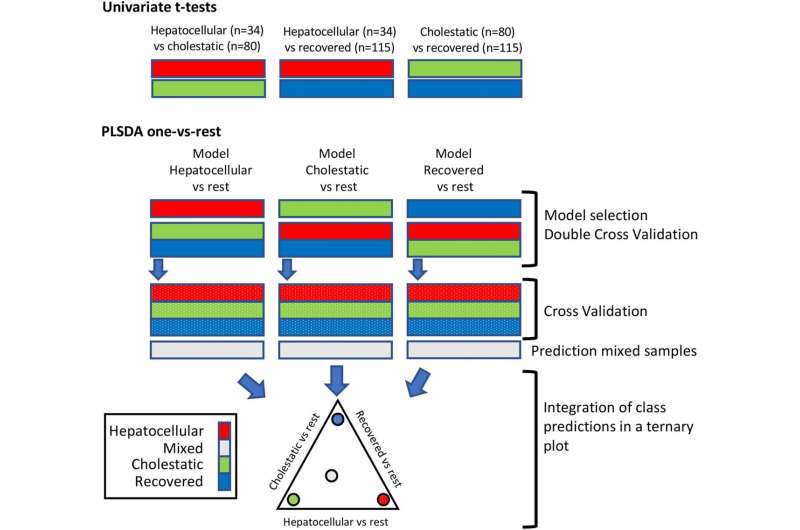 Drug-induced liver injury (DILI) is an adverse reaction to ingesting a drug, which can appear both in developmental stages, in their clinical use and even after being approved as a drug. It is the main cause of acute liver failure in Europe and the United States, and its incidence has increased as a result of the polypharmacy that goes hand in hand with the increased lifespan of the population, and from the prolonged use of parapharmacy or herbal products.

Hepatitis induced by drugs comes in three clinically differentiated forms. With a predominance of hepatocellular damage and the death of lymphocytes, as a cholestasis (decreased bile flow) or under a mixed pattern. The unpredictability of this pathology, its clinical relevance, lasix xanax deficient diagnosis and lack of prognostic markers represent a healthcare concern. Drug-induced hepatitis is not diagnosed directly by measuring certain specific parameters of the disease, but it is still done by diagnostic criteria of exclusion—after discarding other possible causes.

The research group of the University of Valencia Mixed Group-IIS La Fe for Experimental Hepatology and Liver Transplant, led by professor José Vicente Castell, and integrated within the CIBEREHD, has addressed this issue by combining its trajectory studying hepatotoxicity caused by drugs, with the used of advanced omics technology. This study is unique, as it is the first time that metabolomics have been used, or the study of the changes in metabolites that take place in a biological sample of the blood of the patients, in this case, during a liver disease.

The article, “Metabolomic analysis to discriminate drug-induced liver injury (DILI) phenotypes,” published in journal Archives of Toxicology, includes a longitudinal observational study conducted on 79 patients affected by DILI, diagnosed and recruited over three years in the La Fe hospital, as part of European project HECATOS, in which the University of Valencia played a significant role.

Through the metabolomic analysis of blood samples of these patients, obtained during their liver process until their full recovery (weeks/months), they assessed hundreds of metabolites in the plasma, the molecules that are part of liver cell metabolism. This made it possible to obtain a large amount of information which, duly processed using biocomputing mathematical models, “allowed us to identify a group of metabolites that, as a signature or analytical footprint, turned out to be characteristic and discriminating of the phenotype and severity of the disease,” says Guillermo Quintás, first signee of the study.

The study reveals and backs the existence of relevant metabolic biomarkers for the cholestatic and hepatocellular phenotypes of DILI. Measuring these biomarkers makes it possible to establish the level of hepatocellular damage, cholestasis or level of recovery that a patient has when the sample was taken.

All the information obtained from each sample of every patient has been condensed by the authors in the form of ternary graphic diagrams which can be directly and easily interpreted. “Each one of the apexes of the triangle represents the level of hepatocellular or cholestatic damage or level of recovery of a patient at a given moment in time. The information obtained from the metabolome makes it possible to place within said ternary diagram a point that represents the patient and whose distance to the vertexes indicates the phenotype of the DILI and its severity,” says José Vicente Castell, senior researcher and promoter of this scientific initiative.

“Representing the data from the metabolomic analysis in the ternary diagram and throughout the liver process allows us to visualize very intuitively the evolution of the disease and the level of recovery,” says Isabel Conde, who was in charge of recruiting and diagnosing patients with DILI.