“Foot selfies” may be a simple solution to keeping tabs on patients at high risk for diabetic foot complications.

Patients with or at risk of foot ulcers are told to check their feet regularly at home, but doing so can be difficult for those who aren’t flexible or who have vision problems. Those who live alone may not be able to ask someone else to check their feet for them. Some use hand mirrors, but those can be difficult to manipulate and don’t offer feedback.

To address the problem, Mark Swerdlow, a fourth-year medical student at the University of Southern California, Keck School of Medicine, Los Angeles, built a simple 3D-print device that allows patients to take standardized photos of the entire plantar surface of their feet with a phone app using voice commands.

The “Foot Selfie System” eliminates the need for assistance and allows the images to be sent to a clinician.

Swerdlow gave a demonstration of the device during the recent virtual meeting of the Diabetes Technology Society. And results from a feasibility study of 15 patients were published online October 31 in the Journal of Diabetes Science and Technology.

“The point of it is to be a very simple tool that essentially anybody can use, azithromycin capsules usp 500 mg ” Swerdlow told Medscape Medical News.

Ulbrecht noted, however, that there are “many unanswered questions,” for example, “will people be willing to spend money to buy this gadget?” He also questioned who, at the clinic, would look at what could turn out to be numerous images.

However, “clearly there could be an artificial intelligence filter and patients could be taught to not rely on someone looking but rather to report a concern [and] a human would [then] look at the pictures,” noted Ulbrecht, who is medical director of the Diabetes Foot Clinic at Mount Nittany Health System, State College, Pennsylvania. 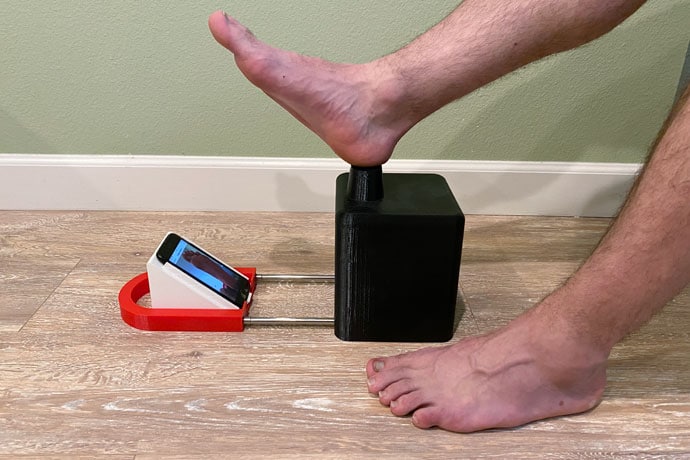 Patients Liked Using the Device in the Feasibility Study

The Foot Selfie System consists of a heel platform, a smartphone holder, and a base that connects the two via telescoping rods. The Foot Selfie smartphone app, for iOS and Android, directs users to take voice-activated photos, view them, and upload them to a protected storage server for review by healthcare providers. The app reminds patients to image their feet if they haven’t done so in the previous 24 hours.

The device sits on the floor in front of the patient who is seated. The patient opens the phone app to the “take photos” screen, then places the phone in the holder either before or after placing the device on the ground. The patient then places their heel on the platform so that the entire underside of the foot is facing the phone. A voice command triggers the image capture. The app then audibly tells the patient to switch to the other foot for the next photo.

The patient then picks up the phone to view the photos, which can be enlarged, and flag any concerns. When ready, the patient presses an upload button to send the image to their healthcare provider.

The study population included 10 men and 5 women who were an average age of 57.4 years. All were American Diabetes Association Diabetic Foot Risk Category 3, defined as the presence of diabetes with a previous history of ulcer or lower extremity amputation, Charcot neuropathy, or chronic venous insufficiency. At study entry, three patients had five distinct active wounds, and nine had 13 distinct pre-ulcerative lesions.

Participants uploaded images on a median of 76% of eligible days, and all but one person imaged their feet on at least 50% of eligible days. Of the five individuals hospitalized during the study, foot wound issues were the reason in only one patient.

In the questionnaires, most participants reported that they would continue to image their feet daily, or every other day, outside of the study. On a scale of 1 to 10 for ease of use, they gave the device a median score of 10 (extremely easy). All answered “true” to the statement, “the system is a useful tool in monitoring my feet.” And in response to the question “How useful does this system seem to you in helping to prevent foot ulcers?” the median score rose from 8 at enrolment to 9.5 at 6 months.

The proportion who said they preferred the Foot Selfie System over their previous methods of foot screening was 80% at 1 week and 90% at 6 months. And at all timepoints, all users said they would recommend the system to someone else who was concerned about developing a foot wound.

Asked if the benefits of using the system outweighed the disadvantages on a scale from 1 (not at all) to 10 (absolutely), the median score was 10 throughout the study.

The Foot Selfie System isn’t commercially available, but Swerdlow and colleagues are exploring ways to mass produce the device and intend to conduct a larger study. And, as Ulbrecht mentioned, they are working on an artificial intelligence overlay to assist clinicians in identifying pre-ulcerative lesions or other problems semiautonomously.

In addition, hyperspectral imaging could be used to identify pre-ulcerous areas before they are identifiable with visible light. Special cameras are already available that can do this, although they are currently bulky. Companies are working on miniaturizing them and potentially enabling them to work with smartphones, Swerdlow said.

Meanwhile, clinic director and principal study investigator David G. Armstrong, DPM, MD, PhD, told Medscape Medical News that patients at Keck’s Southwestern Academic Limb Salvage Alliance, who were not study participants, are encouraged to informally take photos of their feet with their phones at home, or have others do it for them, and send them in.

“Not a week goes by where we don’t spot a problem early and prevent a hospitalization,” he said.

The study was supported in part by the National Institutes of Health, National Institute of Diabetes and Digestive and Kidney Diseases, and the National Science Foundation. Swerdlow has reported being granted a utility patent for the Foot Selfie system. Armstrong and Ulbrecht have reported no relevant financial relationships.

Miriam E. Tucker is a freelance journalist based in the Washington, DC, area. She is a regular contributor to Medscape, with other work appearing in The Washington Post, NPR’s Shots blog, and Diabetes Forecast magazine. She is on Twitter: @MiriamETucker.